Go to the main page
Canary Islands: a Budget Vacation Near the Ocean
Travellizy team
Places

Canary Islands: a Budget Vacation Near the Ocean

Even very sophisticated travelers dream of visiting a Spanish tropical paradise. Nevertheless, there is a perception that rest on the Canary Islands is not a budget pleasure. Travellizy is in a hurry to dispel this myth and inspire its readers!

The Canary Archipelago is located in the Atlantic Ocean. It consists of seven islands of volcanic origin - Gran Canaria, Fuerteventura, Lanzarote, Tenerife, La Palma, La Gomera and El Hierro. The islands belong to Spain and are part of the European Union. The capital city of the Canary Islands changes every 4 years. Its title is passed to each other among the cities of Las Palmas de Gran Canaria and Santa Cruz de Tenerife.

Rest on the Canary Islands can be called a paradise. Tourists come here all year round. In summer, the average air temperature is + 23 ° C, in winter + 19 ° C. The warmest season begins in May, and ends in November. However, the most pleasant holiday on the islands and the real velvet season is in September: the air temperature on the beaches is within + 24-27 ° С, the water in the Atlantic Ocean warms up to a comfortable + 24-25 ° С. The bulk of the tourists have already flown away, as summer vacations and holidays have come to an end. Accommodation prices are falling, and the beaches are empty. 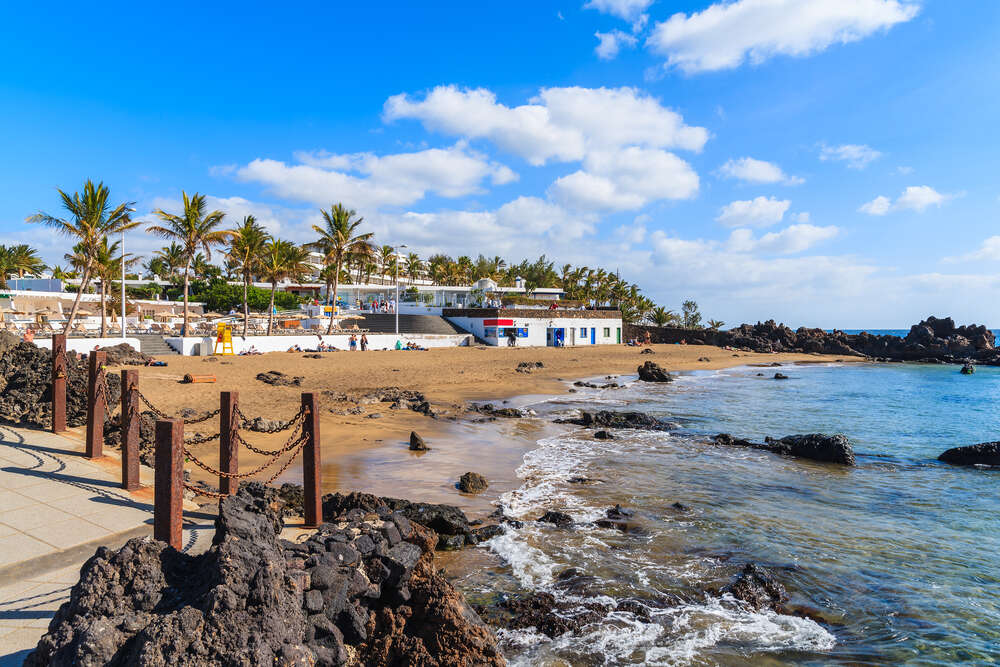 What's the cheapest way to fly to the Canary Islands?

As promised, we offer you only the best and budget options.

On the online ticketing platform Travellizy you will find flights to the airports of the three most popular resorts: 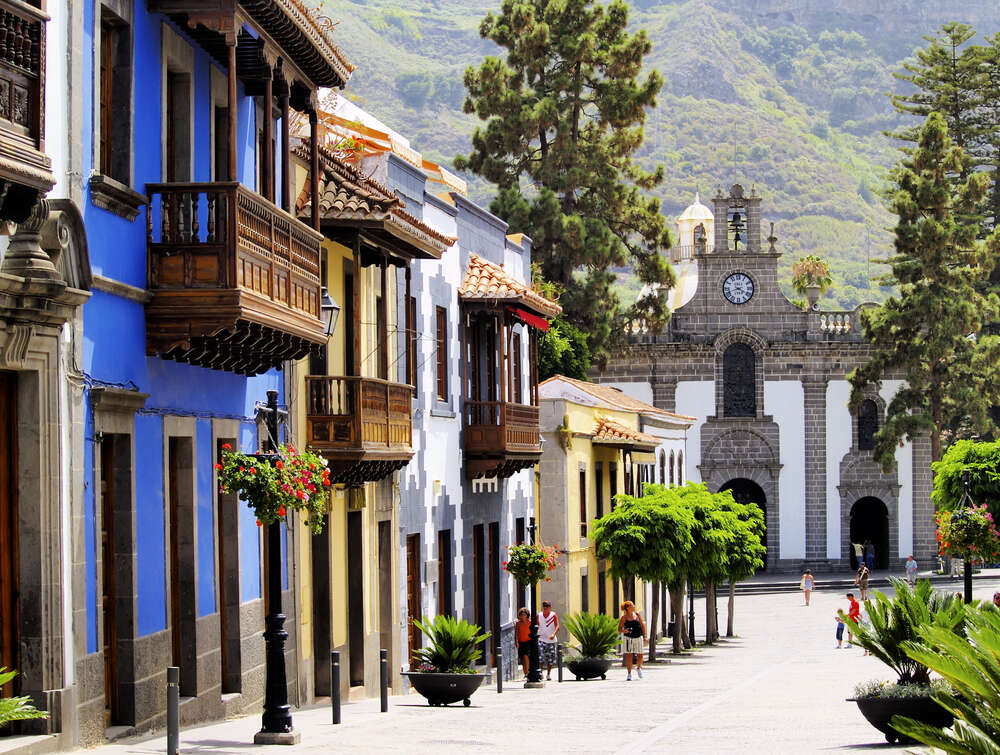 The average cost of Kiev - Gran Canaria flight with Swiss International Airlines will cost up to 360 euros. Most flights are connecting. Budget flight option is 340 euros (Klm Royal Dutch Airlines) 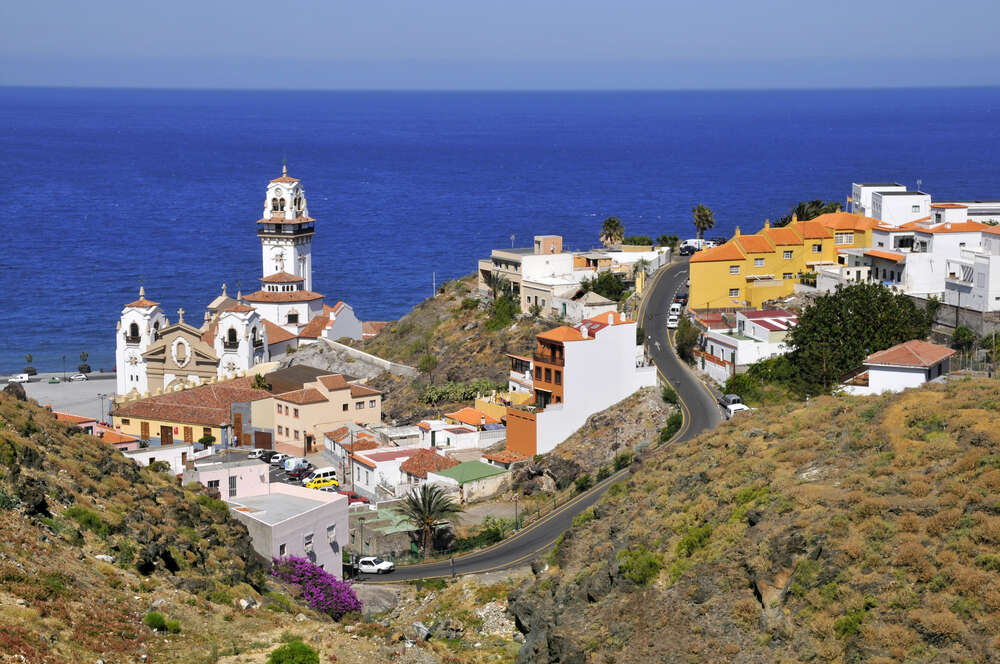 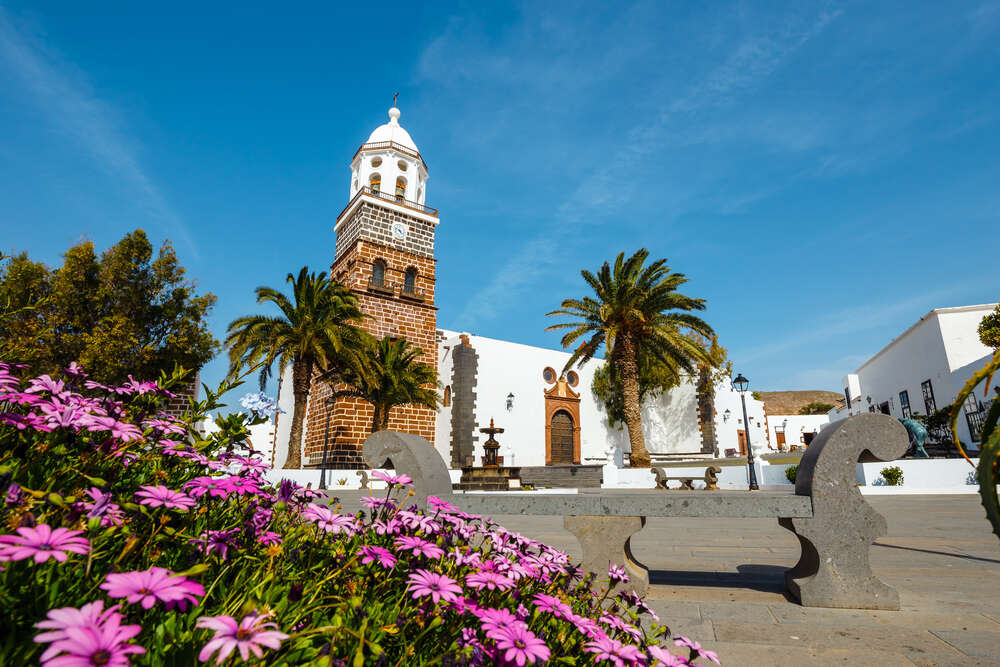 Tickets to the island of Lanzarote will cost about 580 euros.

Public Transport in the Canary Islands:

There is no railway in the Canary Islands. Buses are a low-cost, convenient and fast mode of transport on the islands.

From Las Palmas, buses leave from the San Telmo Park bus station and from the Santa Catalina Park terminal. Buses belong to a company called Global. Schedule and prices can be found at website. The cost of one ticket for a city bus is about 1 euro. City buses run from 6:00 to 21:30. 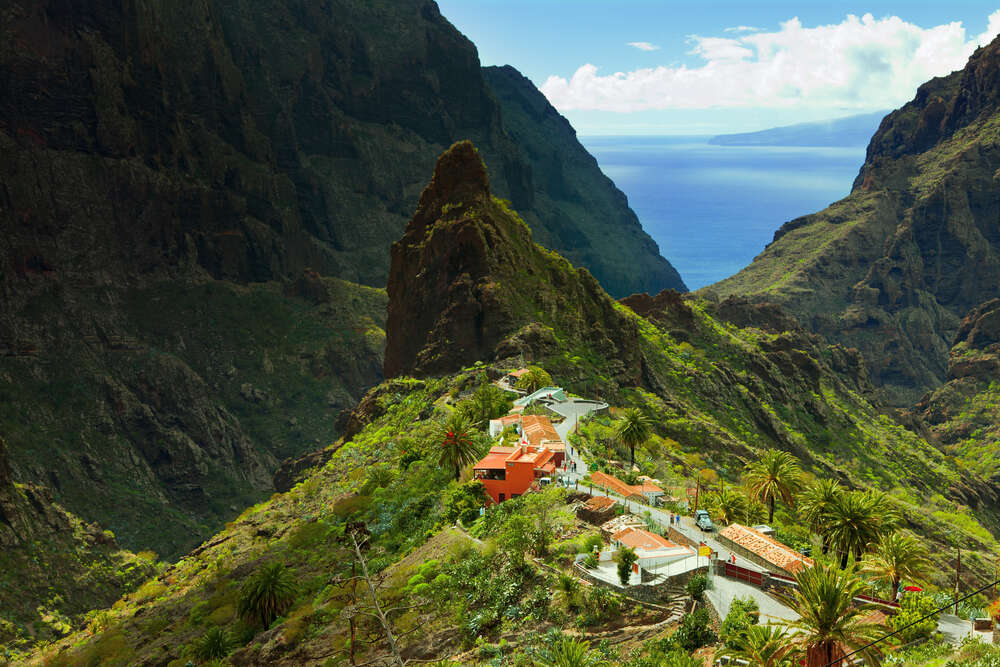 Buses of Transportes Interurbanos Tenerife, SA (TITSA) operate on the island. Schedule and prices can be ckecked at website. At the bus stations, you can buy a ticket for several trips at a discount. Such a ticket is called Bono guagua. 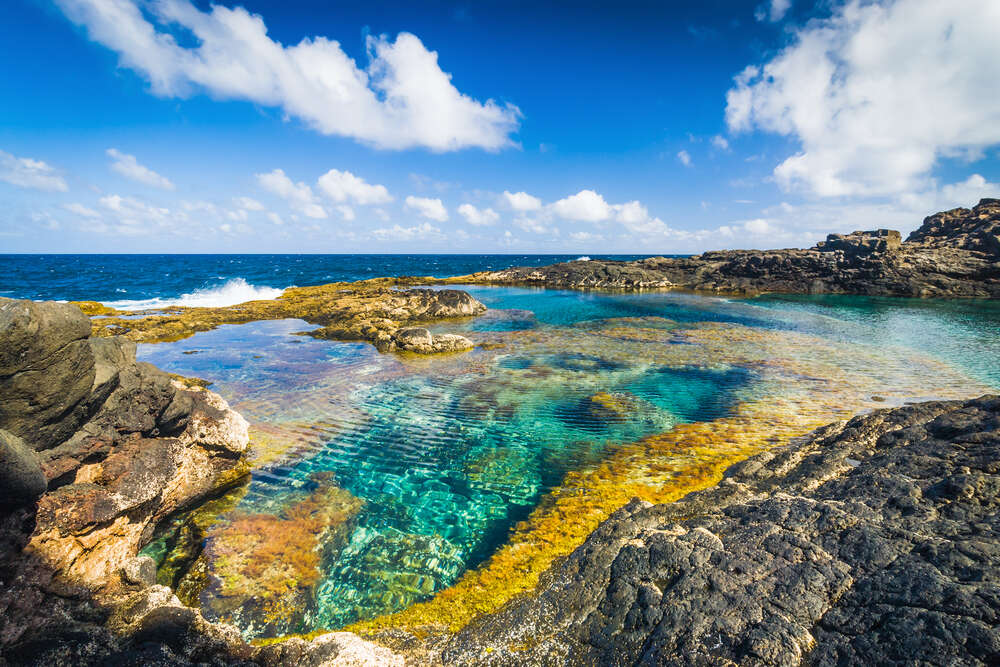 Buses of the Lanzarote Bus company run at intervals of 25 minutes. From Arrecife, buses leave for Costa Teguise and Puerto del Carmen, as well as for the airport and Playa Onda. You can check schedule and prices here.

What Attracts Tourists to the Best Resorts of the Canary Islands?

Gran Canaria is the third largest island of the Canary Archipelago after Tenerife and Fuerteventura. Its area is 1560 square km. The nature of the island impresses with its diversity and contrasts - from endless sandy beaches surrounded by banana plantations to rocky mountain chains. Gran Canaria has the status of a UNESCO reserve. 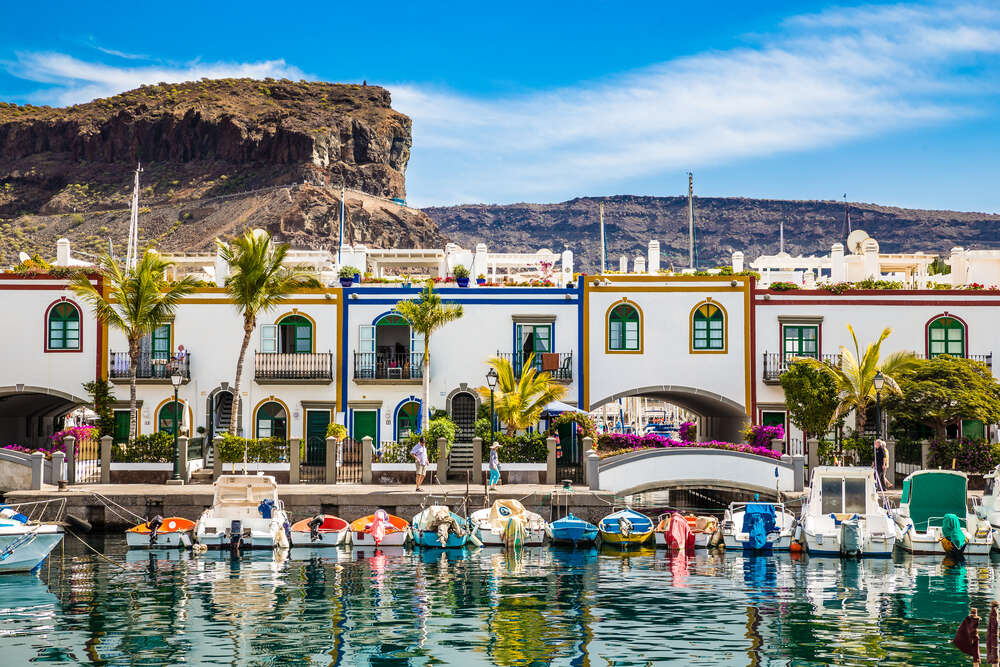 On the southern part of the island, there are the resorts of San Agustin, Playa del Ingles and Sonnenland. The total length of the beaches is more than 17 km. The main pearl of the island is the dune beach of Maspalomas, included in the list of the best beaches in the world. Sand dunes Maspalomas off the coast of the ocean look beautiful. 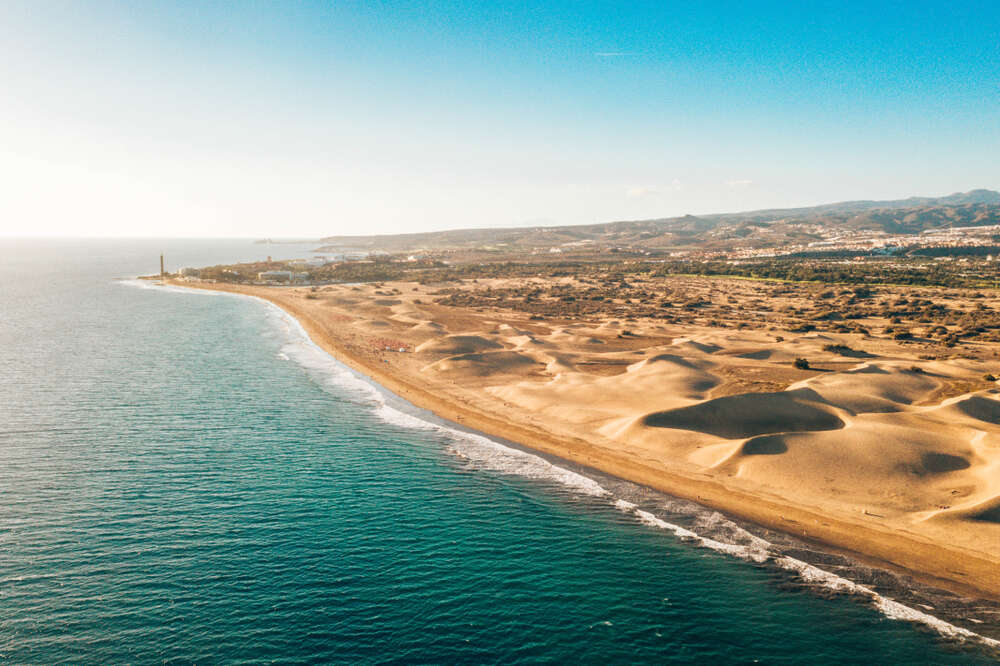 In the southern part of the island, you should visit the Palmetum Botanical Garden. Its area is 120 thousand square m. This is a garden with its own system of reservoirs and a huge collection of palm trees. There is a bird park and two reptile parks called Reptiland and Cocodrilo Park. 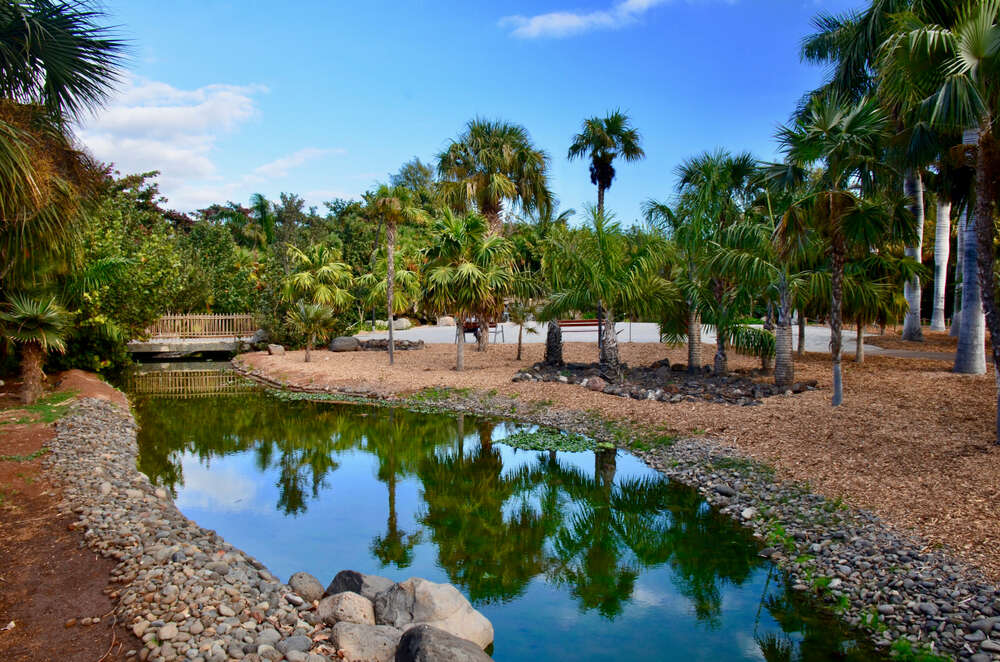 Walk to the historic and currently operating Maspalomas Lighthouse. Near the lighthouse, there are several observation platforms cozy cafes and souvenir shops. 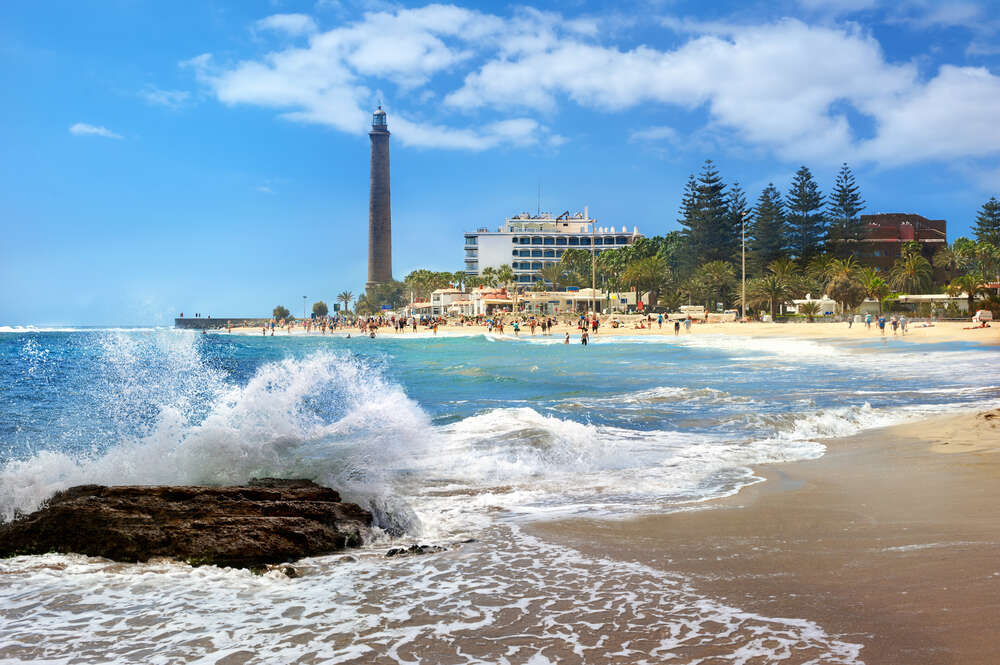 There is a large selection of active entertainment on the beaches of resorts. You can windsurf here, go fishing in the open ocean or jump with a parachute.

The capital of the island is located on the north shore. It's Las Palmas. The city is considered to be the center of entertainment and nightlife.

Tenerife is the largest island of the Canary Archipelago. The area of the island is 2034 square km. Tenerife is an island of volcanic origin. Its highest point is the Teide volcano (Mount Teide, 3718 m). 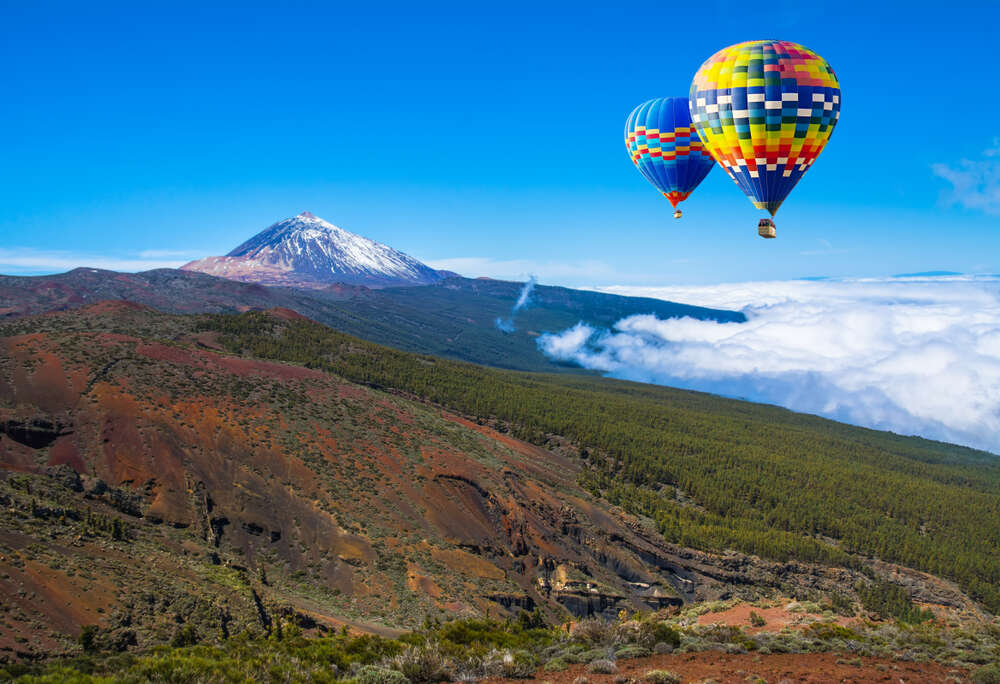 Tenerife is a unique natural complex, there are more than 1,200 plant species here. Among them are such species that are not found anywhere else on Earth. 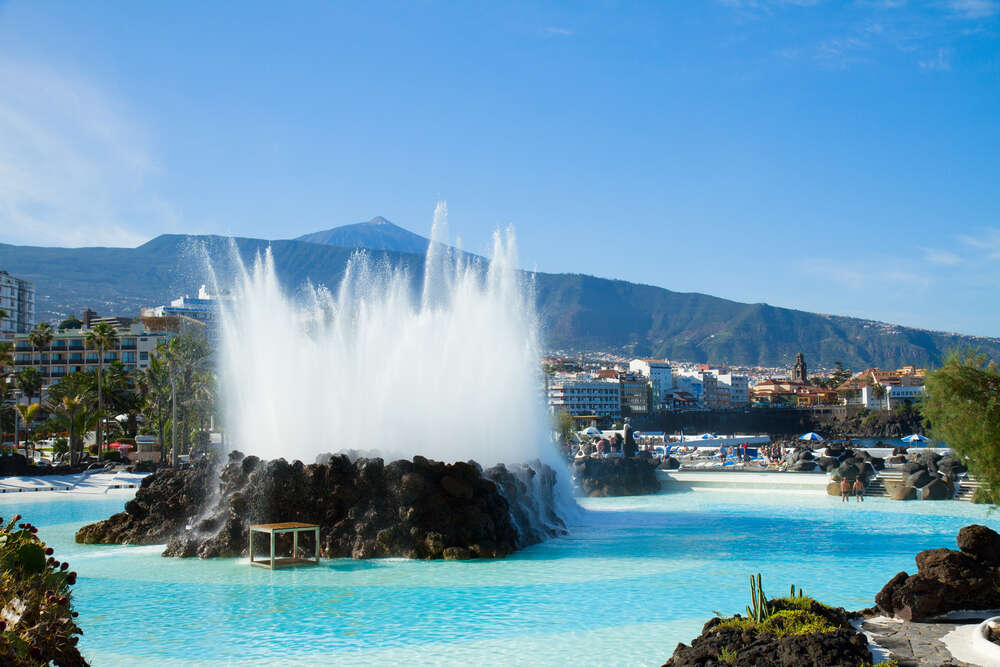 If you like a relaxing holiday, the north of the island is exactly what you need. There are not so many hotels and clubs here.

If you are a fan of parties and nightlife, the south of the island is perfect for you.

South Tenerife is also great for families with children, as most hotels have children's animators and mini clubs. 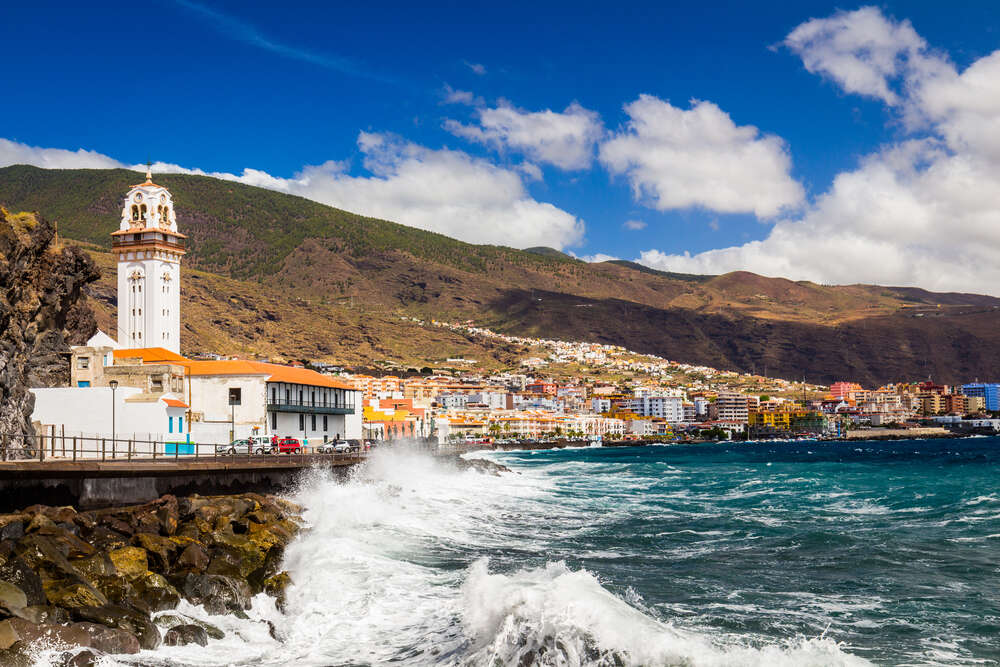 One of the main attractions of Tenerife is Las Cañadas del Teide National Park. It is located in the center of the southern part of the island. The park surrounds the snowy summit of the Teide volcano. There is an opportunity to go up to the top of the mountain by the cable car. 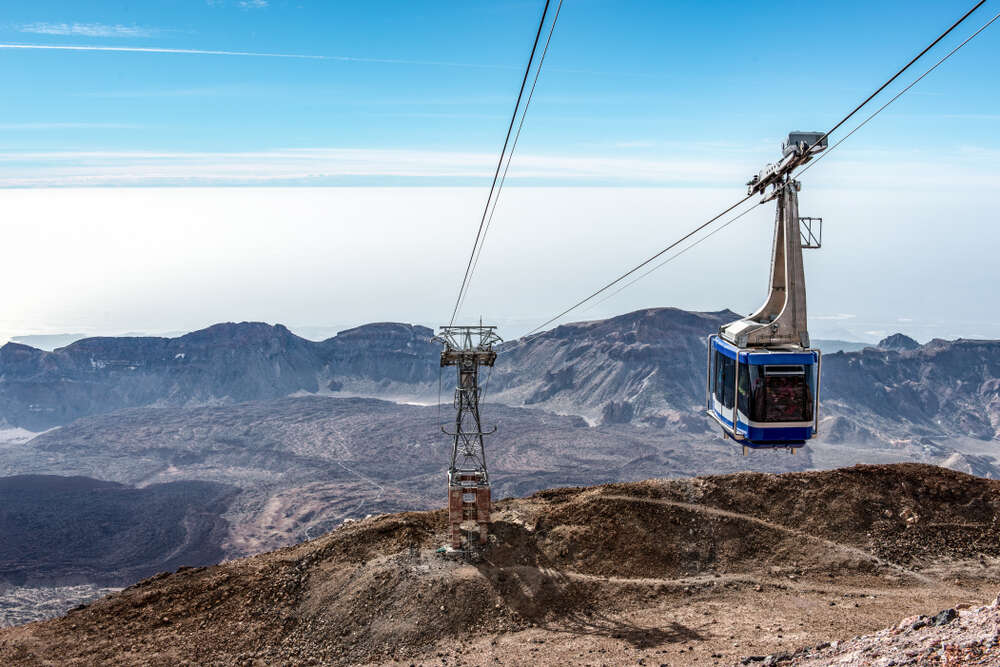 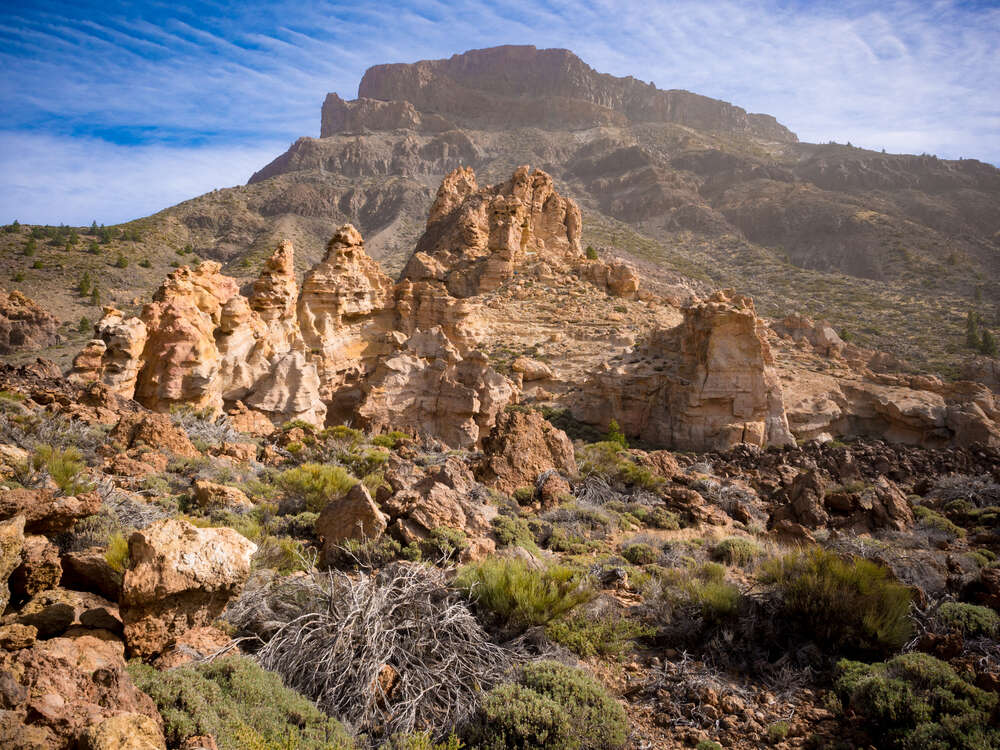 In the southern part of the island, it is always sunny and dry, in contrast to the wet and green north. That is why the nature of the island is impressive with its contrasting beauty. Whichever part of the island you go to, you will definitely not miss out on the magnificent scenery. 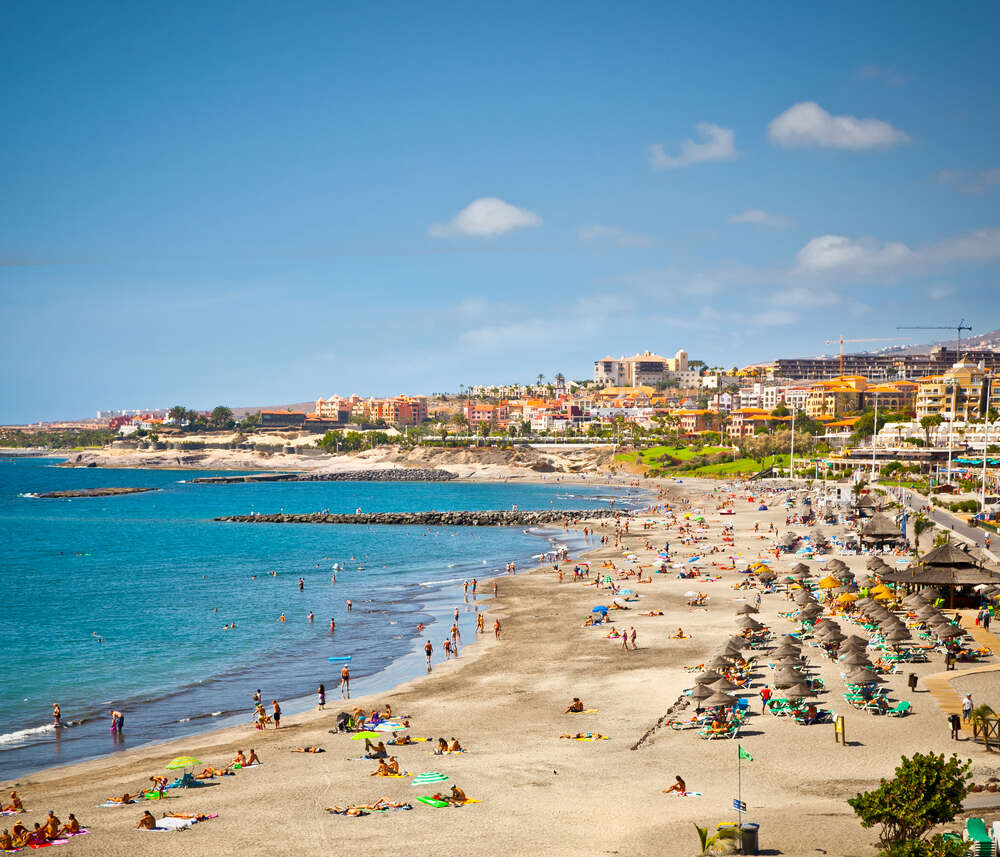 A series of beautiful sandy beaches stretches along the coast. The resort of Playa de las Americas is one of the most popular in the southern part of Tenerife.

Lanzarote is the fourth largest island of the Canary archipelago. The area of the island is 845.9 square km. Fire Island - that's what the Spaniards call it. This is the most volcanically active place of the Canary Islands. Due to frequent eruptions in the XVIII and XIX centuries, the landscape of the island was changed. Nowadays, Lanzarote consists of more than 300 craters of black, pink and purple, as well as a huge number of volcanic cones and caves. 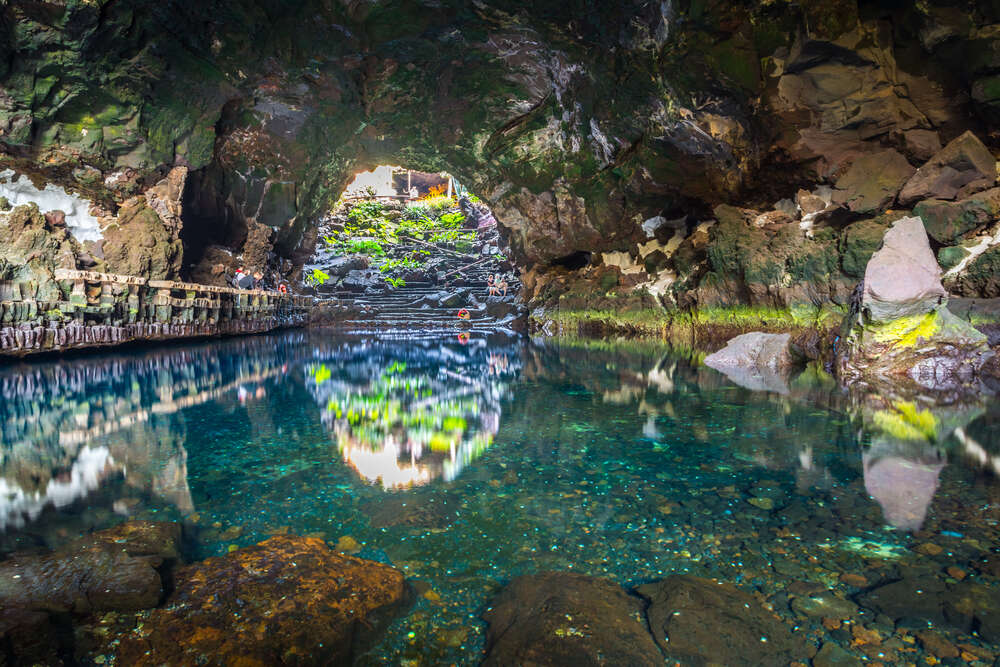 The capital of Lanzarote is the city of Arrecife, the main seaport. 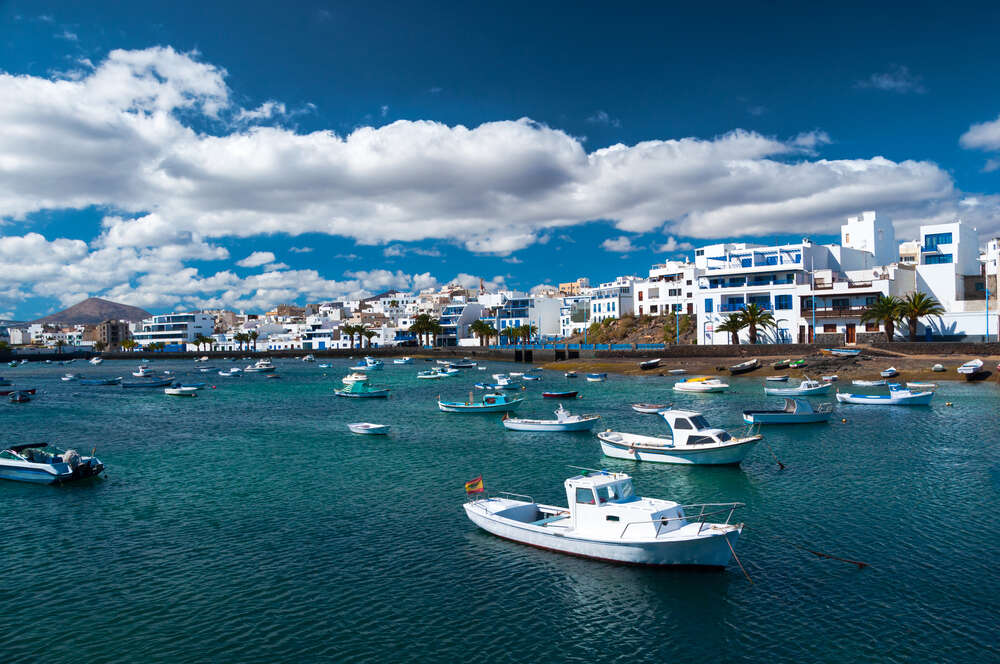 One of the main attractions of the island is the National Park Timanfaya, which is located in the northwestern part of Lanzarote. Its area is about 50 square km. This desert is covered with ash and a large number of volcanic craters. It is allowed to move along it only on a special bus along a route specially laid through the lava. Walking on frozen lava or driving on your own car is prohibited. 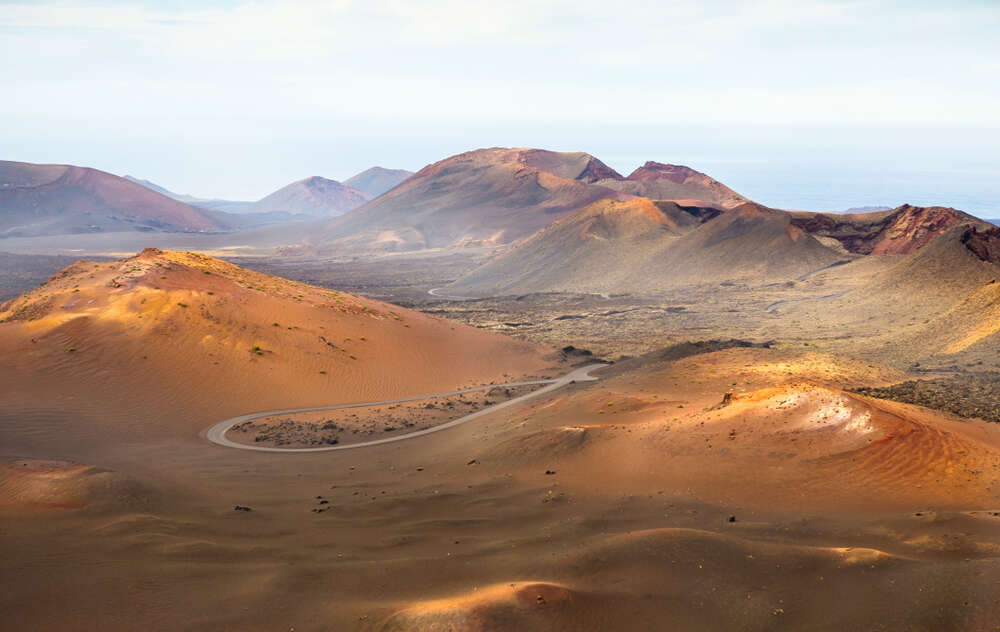 Fans of exotic are advised to look into the restaurant-roaster El Diablo. All dishes are prepared here thanks to the volcano heat. 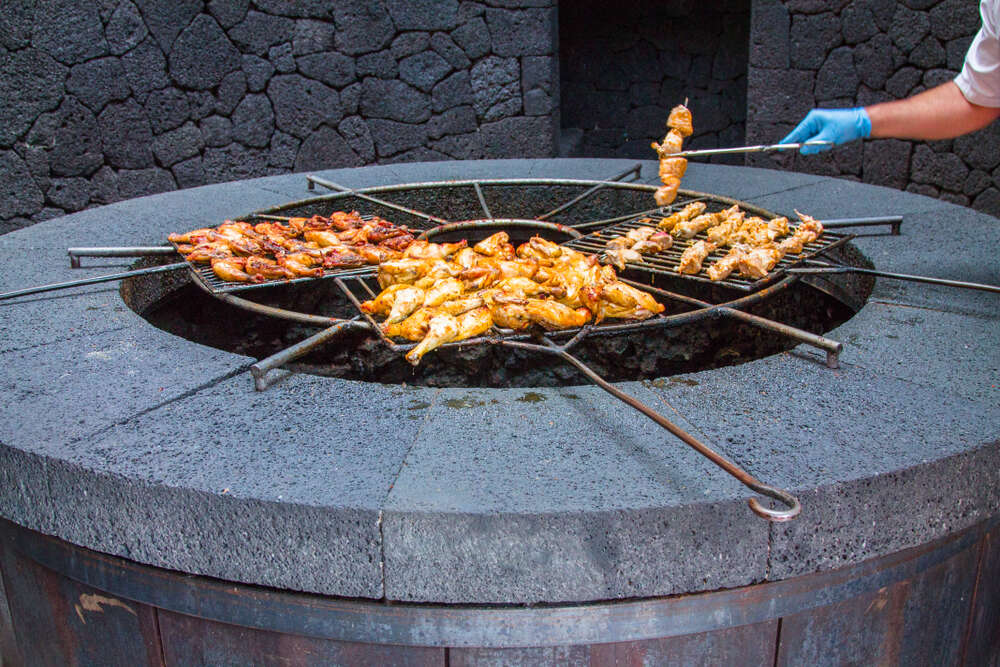 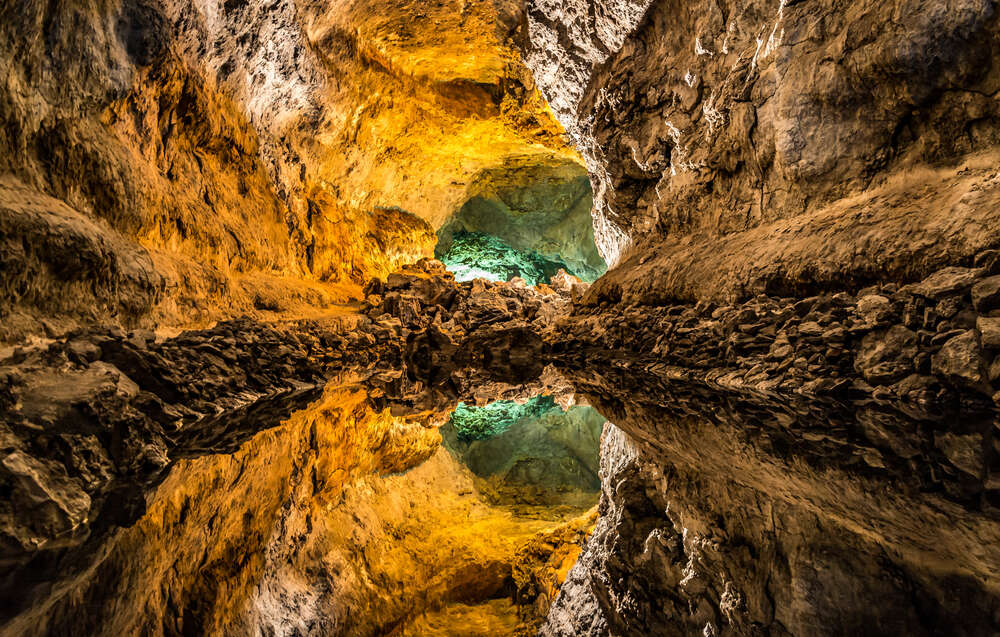 As for the beaches, there are no huge long beaches on Lanzarote. There are only 30 km of sandy beaches of the 250 km coastline. These are small closed bays with white sand. 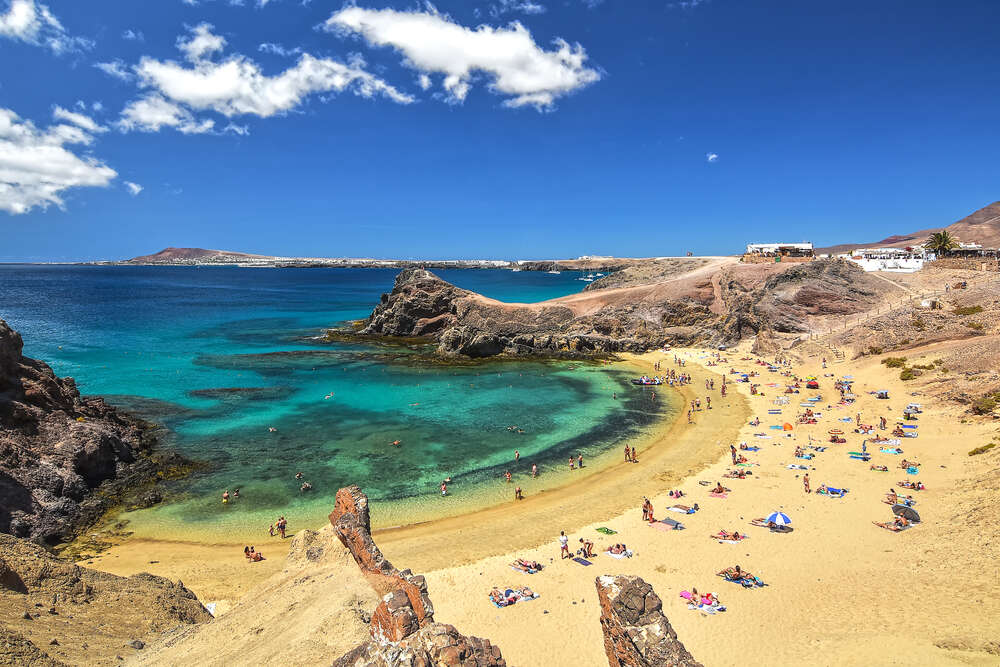 One of the most beautiful beaches of the island in the south of Lanzarote is the magnificent bay of Punta Papagayo. Las Kucharas Beach in the northeast of the island received an international blue flag award. 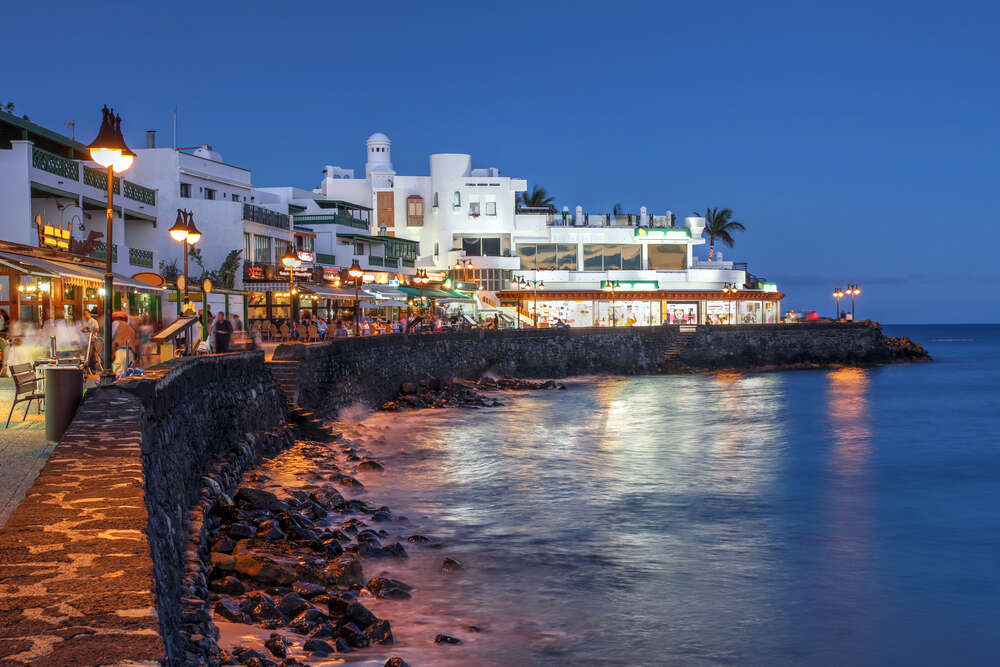 Travellizy Team is confident that after reading our article, the Canary Islands have become a little closer to you. Would you like to see this paradise with your own eyes? Then feel free to choose dates and pack your bags. Indeed, it is sometimes much easier to fulfill your dream than you think!