To the end of the world on a bus

What if you want to leave everything for a while, leave everyone and go to the end of the world?

You need to pick up a backpack, buy a ticket for the bus number 403 and leave. True, you will have to fly to Lisbon first. Then take a train to Sintra or Cascais, and after that, take a bus. Travellizy has already prepared a detailed route.

Where to find the end of the world

Steep, sometimes sheer cliffs. Granite boulders interspersed with limestone. Almost flat surface tops.  Creeping stalks of crystal grass. Far below, about fifty meters away - the ocean. And the nearest coast is thousands of kilometers away. 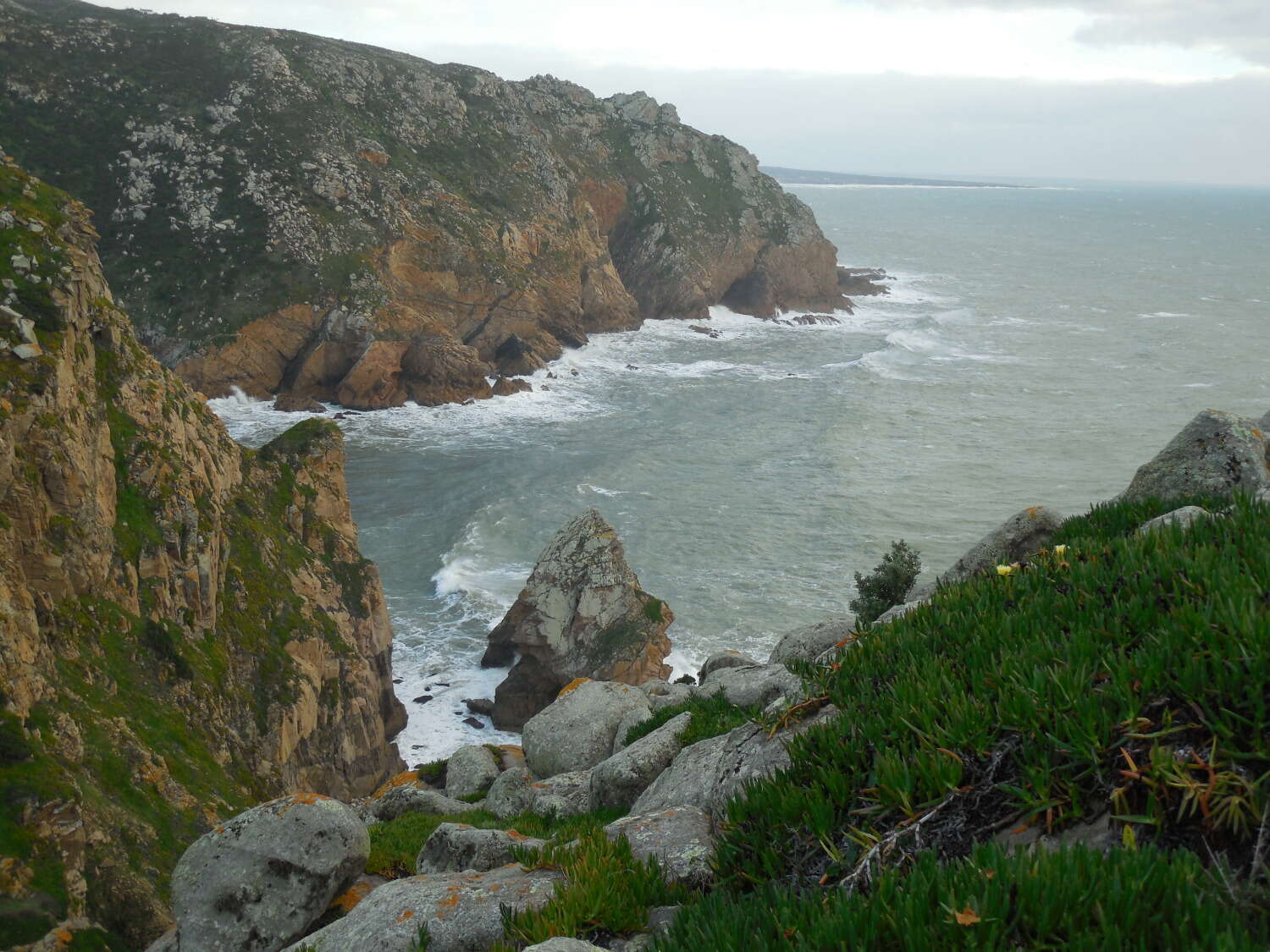 We are on Cape Roca (Cabo da Roca), the most westerly point of continental Europe.

The cape is located on the territory of Sintra-Cascais National Park, just forty kilometers from Lisbon, the capital of Portugal. The ancient Romans discovered this cape and called it Promontorium Magnum - Big Cape. At the time of the Great Geographical Discoveries, it was renamed Lisbon. Now, it is known as Cape Roca. For centuries, this place was considered to be the "end of the world."

"Aqui ... onde a terra se acaba e o mar começa ..." - "Here ...  where the land ends and the sea begins...”- this stanza from the Portuguese poet Luis de Camoes’s “Lusiada” is engraved on a stone stele with a cross mounted on top of the cape. Below are the geographical coordinates of the most western point of the mainland. 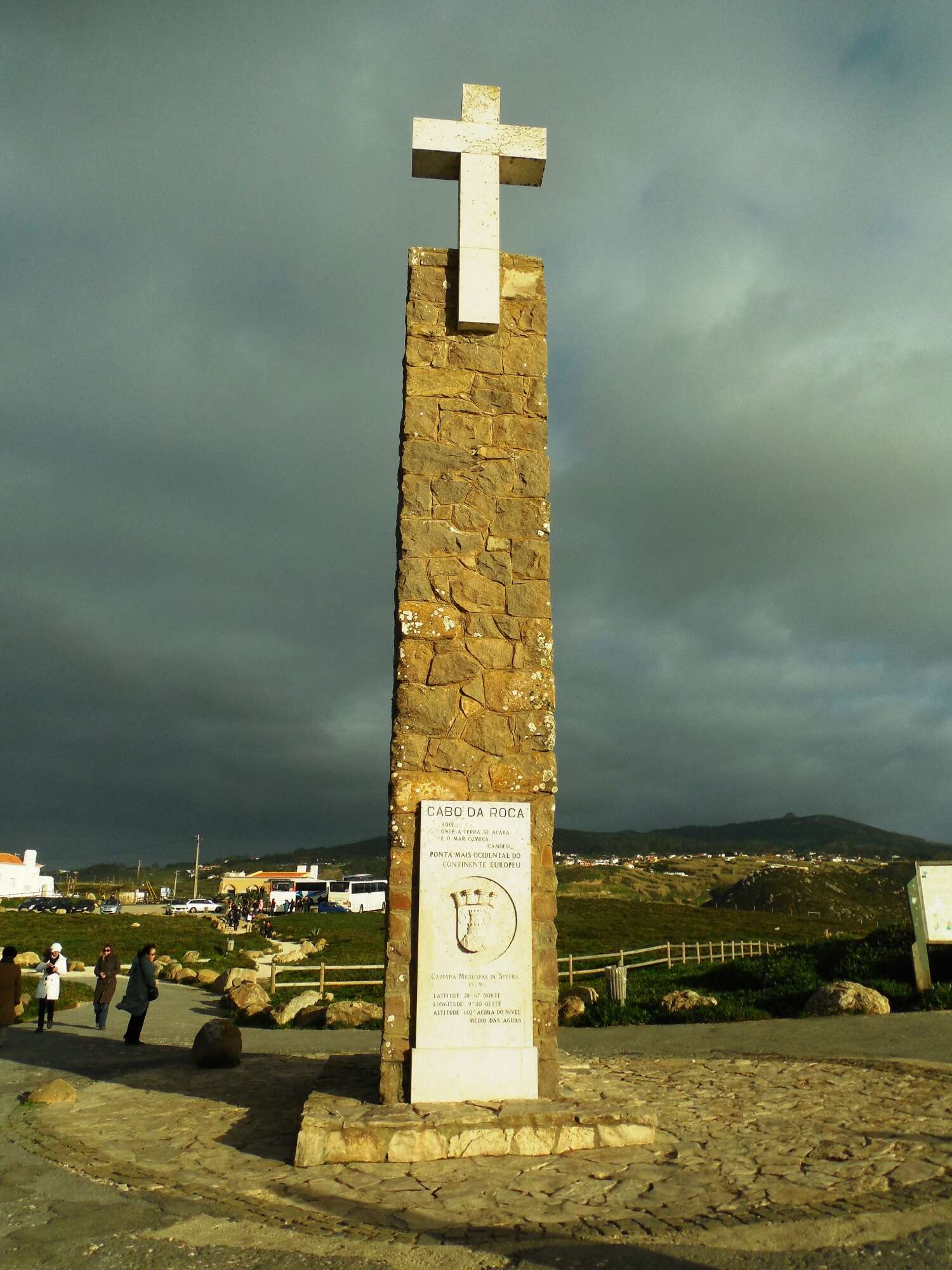 In the 17th century, a fortress was built on Cabo da Roca in order to protect the coast and the approaches to Lisbon. The fortress is gone. But there is a lighthouse, one of the oldest in Portugal. It started working in 1772. Its height is 22 m. The light signal is visible for 26 nautical miles (48 km). Nowadays, you can't get to the lighthouse. According to the official information of the maritime agency Autoridade Maritima Nacional, the lighthouse is closed to the public for an indefinite period due to re-qualification. However, the lighthouse with auxiliary buildings looks also spectacular outside. 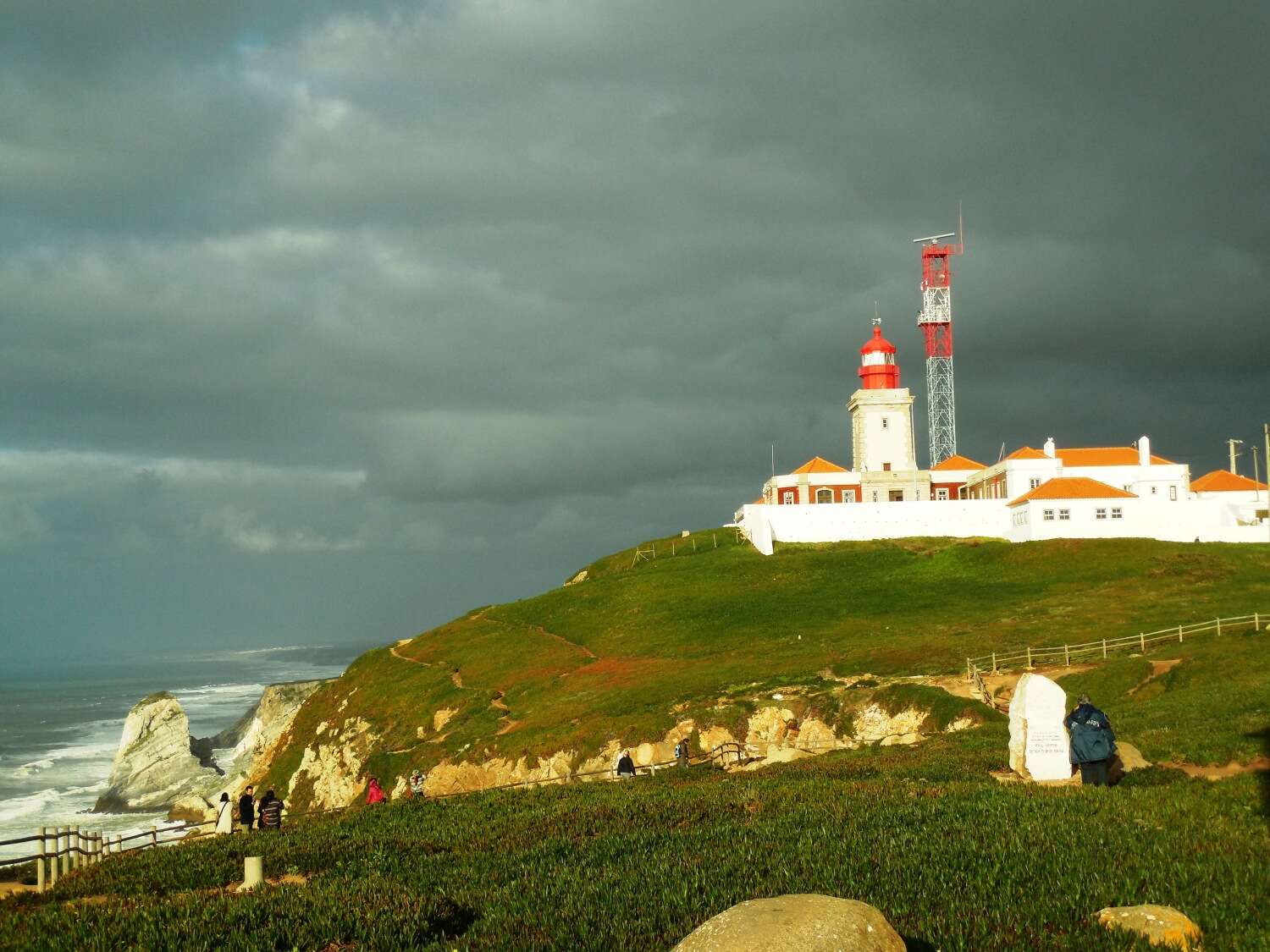 There are several memorable signs on the cape. These are stone slabs in honor of the first winners of the Grand Prix "The Edge of Europe", a 17 km annual mileage from the city of Sintra to Cape Roca.  There is a stone pedestal of the founder of the international organization Rotary International, lawyer Paul Harris. 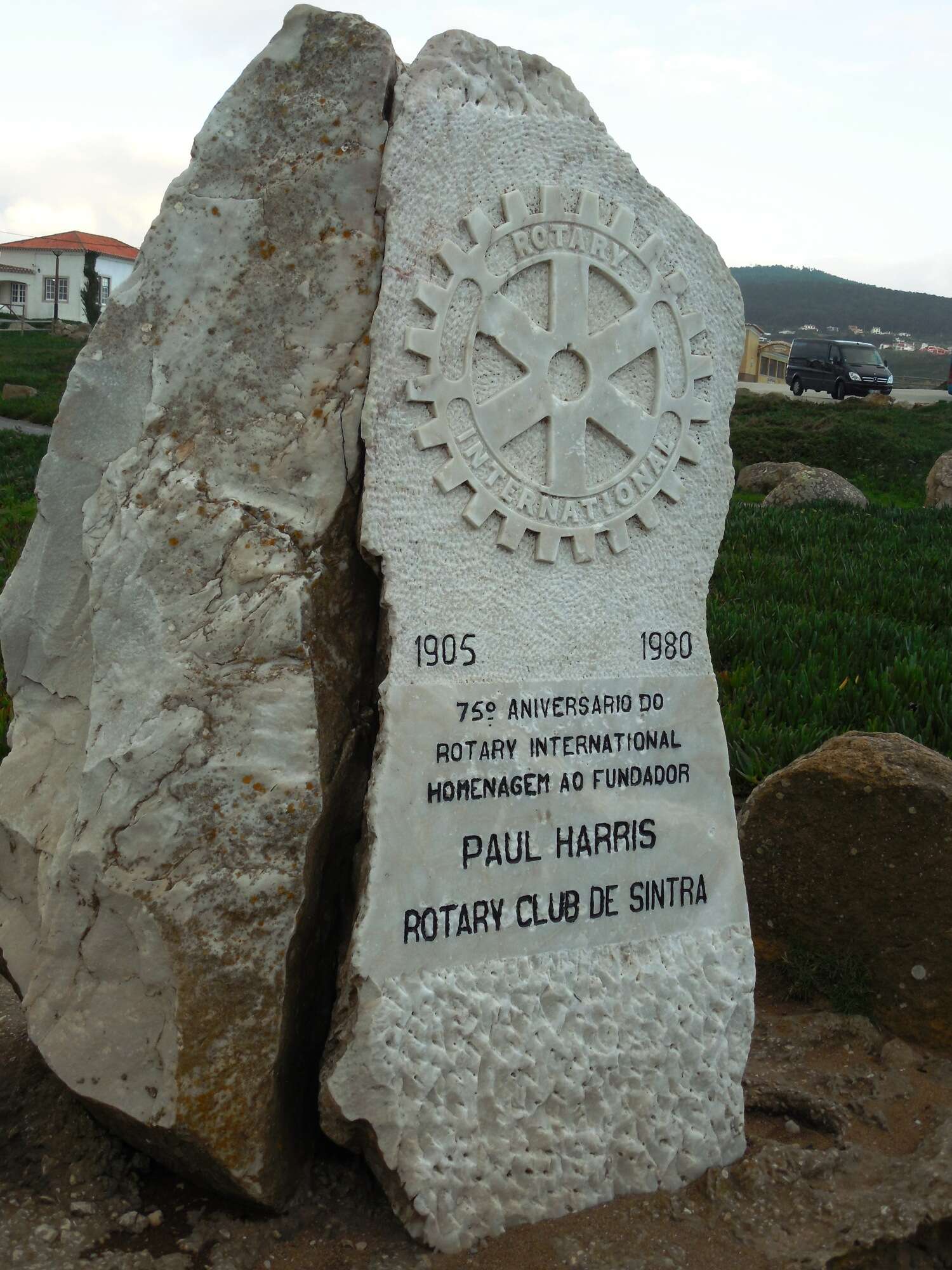 It was established by representatives of the local Rotary Club in honor of the 75th anniversary of the organization. A plaque dedicated to the accession of Cabo da Roca to the list of monuments under the symbolic title "The Blooming World of Sri Chinmoy". This list includes more than a thousand famous places on Earth. 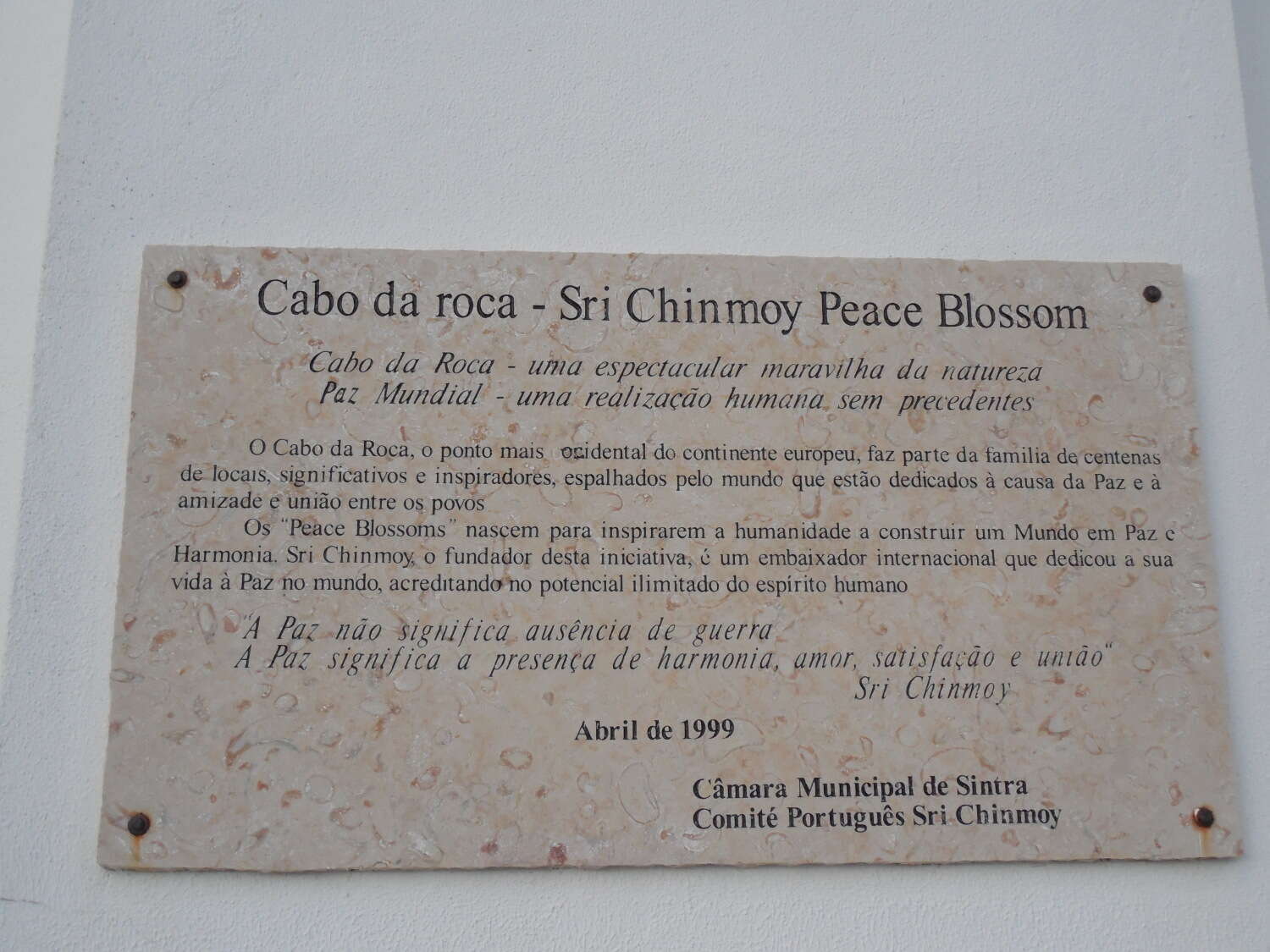 There is a post office on the cape - you can send yourself or your beloved ones greetings in an envelope.  And after returning from a trip, you will get a letter from the edge of the Earth!

There is a tourist office. Those interested can buy a personalized handwritten certificate for 11 euros or Braille for 4.50 with a stamp confirming that you visited the edge of the Earth: “I certify that ... was (a) at Cape Roca in Sintra, in Portugal, in the most western point of the European continent, at the very end of the world, "where the Earth ends and the ocean begins", where the Spirit of Faith, Love and thirst for adventure prompted the Portuguese caravels to go on a journey in search of a new world.

There is a cafe, toilet and free parking. 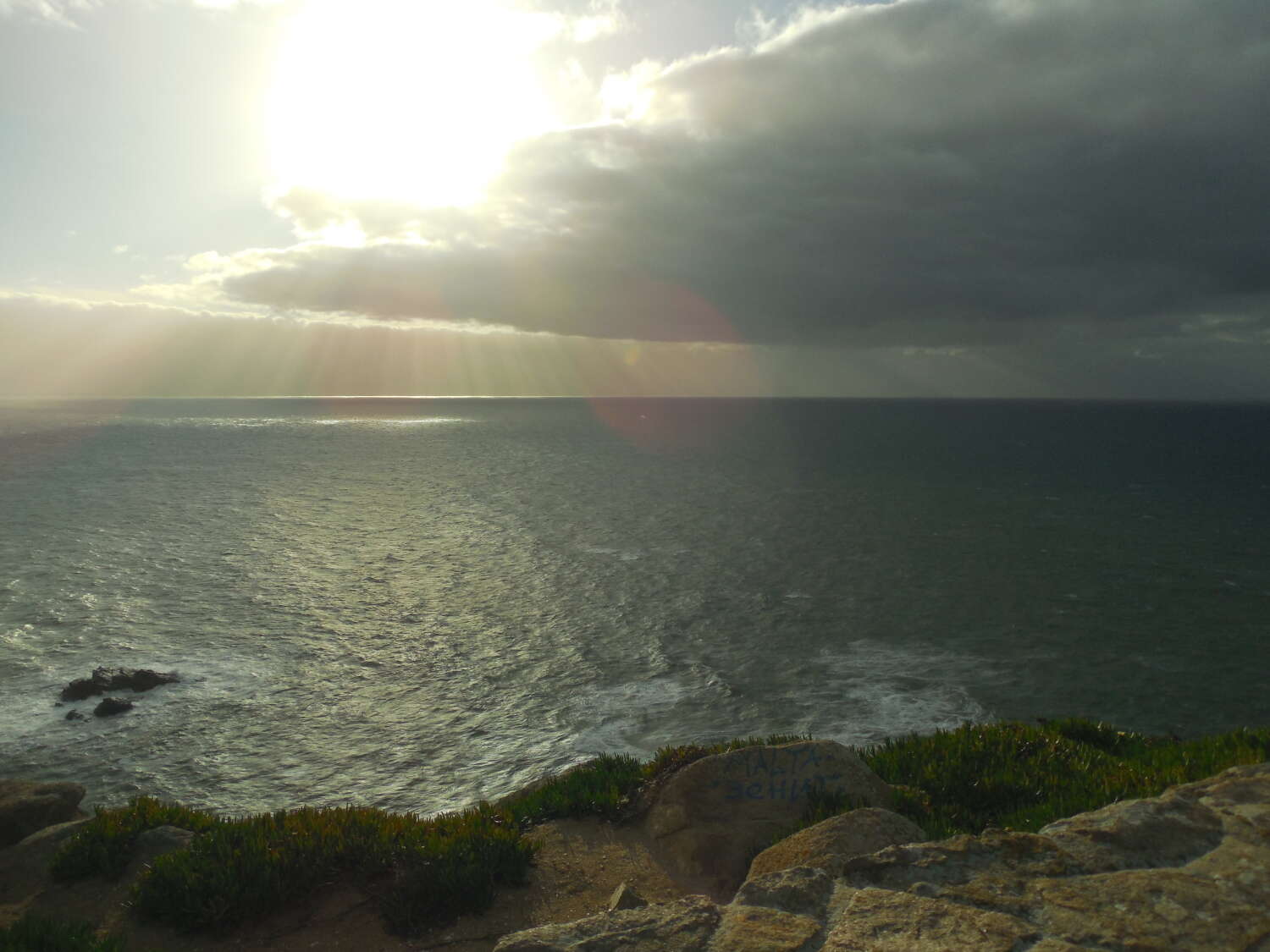 When to go and how long to walk around the cape, you can decide for yourself. If you do it early in the morning and later in the evening, there will be fewer people. At sunset, photos are spectacular: the sun sets into the ocean, the rays make their way through the clouds, the sea changes shades. 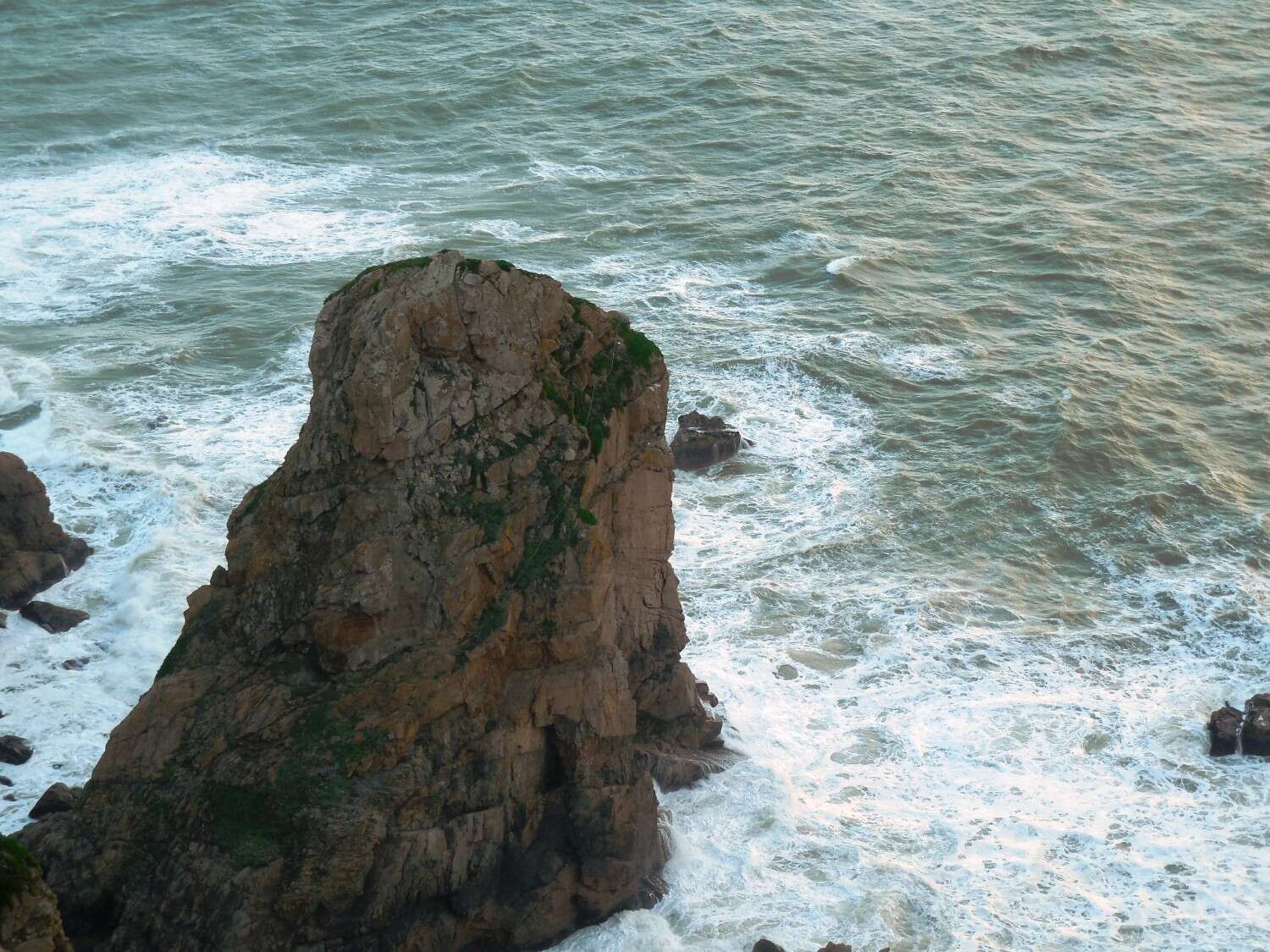 You can do everything for half an hour - realize that you have been at the most extreme point of the continent, acquire a certificate confirming this, take a photo for memory, and go back. And you can slowly watch how the clouds creep, the wind increases, the waves rise. Find a stone away from people and, looking at the endless ocean, dive back into the old ages, when this place was really considered to be the edge of the Earth.

Notes on the stones

Get ready for a strong wind on the cape.

Don't climb over the fences on the edge of the cliff, as they were set for a reason. Because various cases happened...

Don't go down the stones to the ocean, if you are not confident in your strength and shoes.

Keep the kids with you.

Don't be late for the last bus: it leaves from the cape at about seven in the evening. If you are late, call a taxi.

How to get to the end of the world from Lisbon

You can combine a visit to the Cape with the city of Sintra or with the resort of Cascais.

Of course, you can visit Sintra, Cascais and Kaba da Roca in one day. But is it worth galloping around Europe? Decide for yourself and count your strength.

So, this is the first option:

In Lisbon, you need to find the Rossio station or Orient station, whichever is closer to you. Electric trains to Sintra depart approximately every half hour from five in the morning until midnight. A one-way ticket costs € 2.25 (1.15 - for children). The schedule is here. Travel time is 40 minutes. 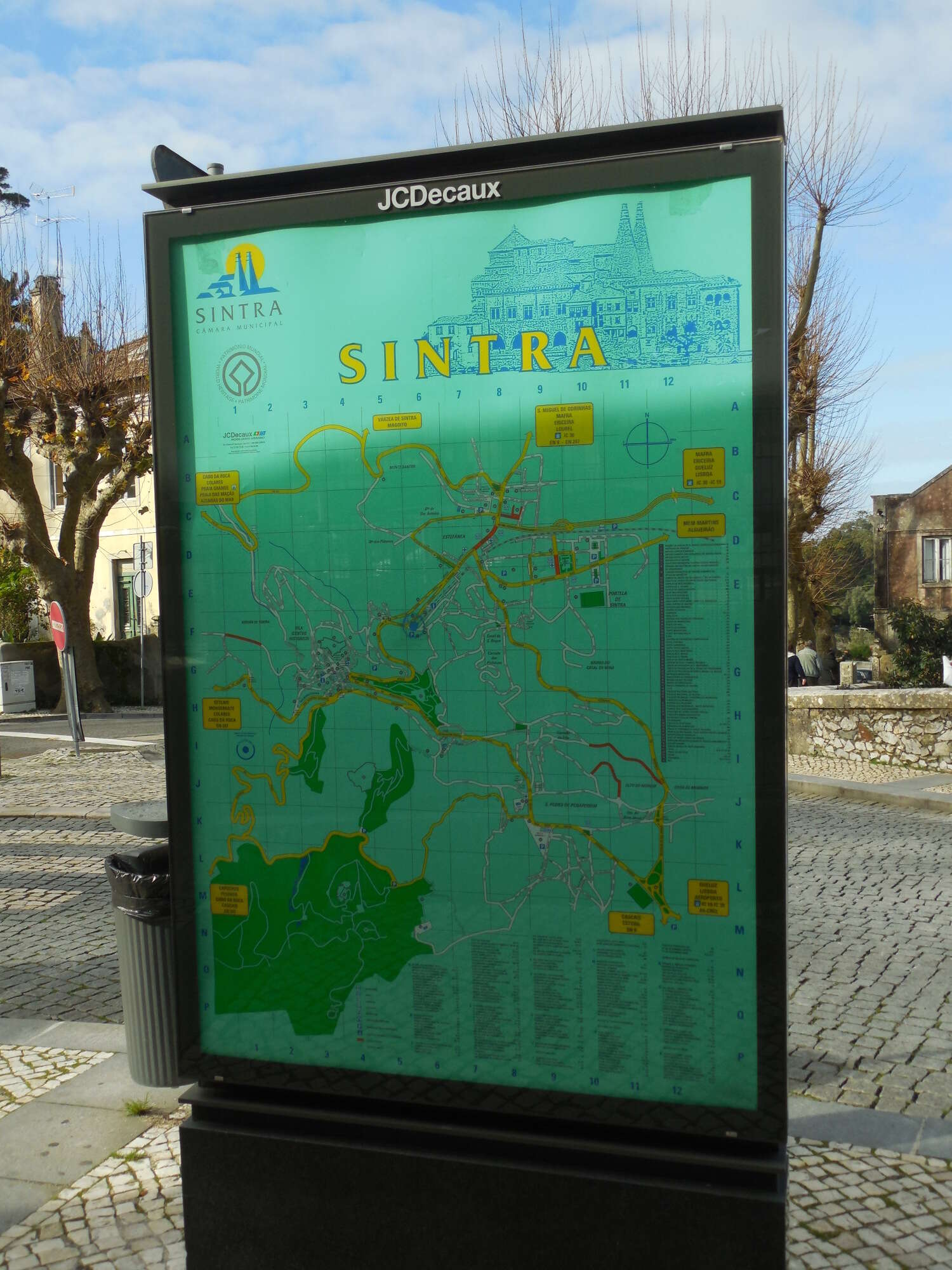 Sintra is a city located among the hills, 23 km from the capital of Portugal. It may seem that castles and palaces are hiding here behind almost every century-old pine. And the city hall building is nothing like a palace. 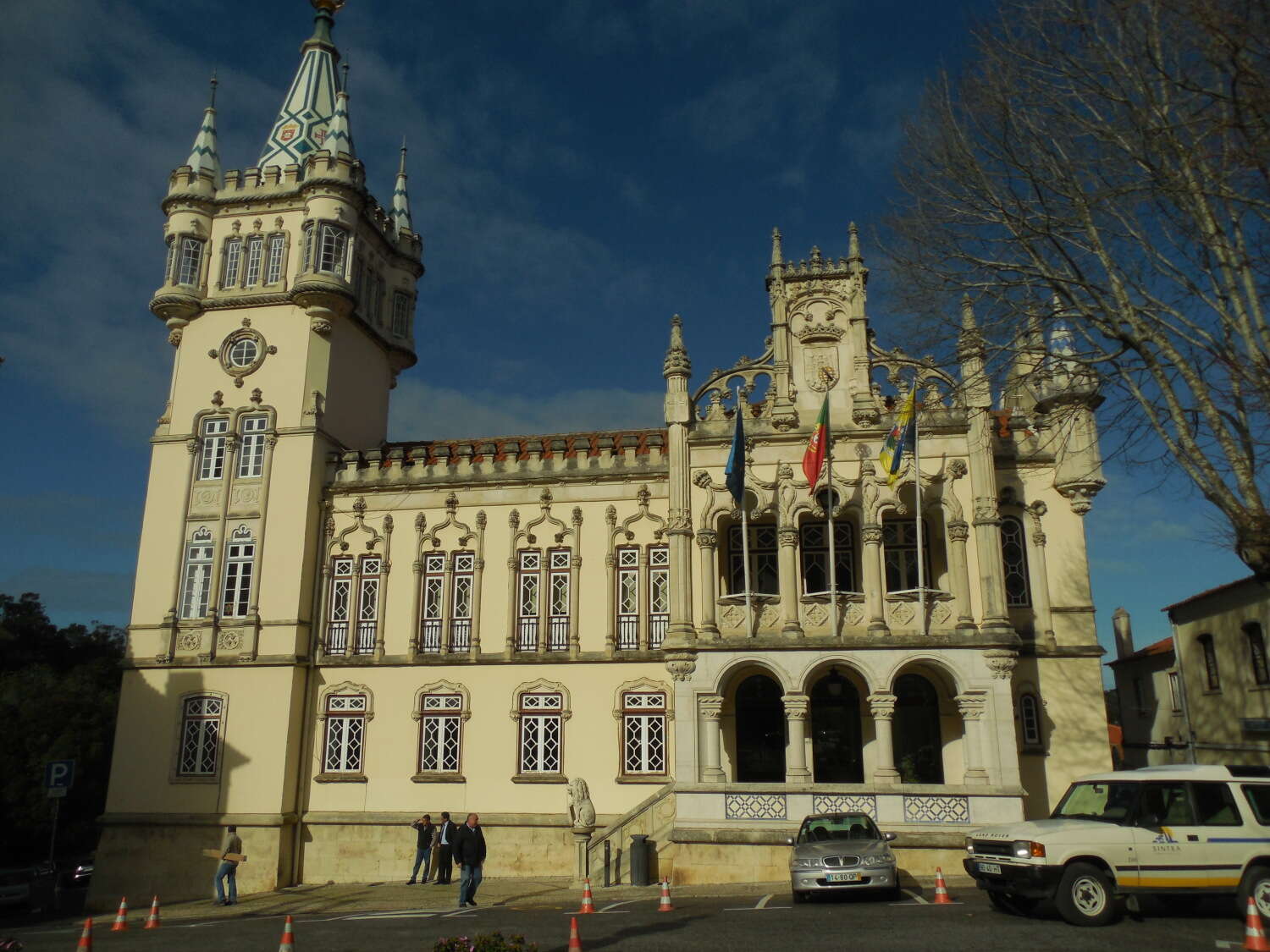 From the end of the train line to the historic center of the city, it is about 15-20 minutes walk. The National Palace of Sintra is located there. It can be recognized by two white cone-shaped tubes. When you get inside, you will see that the chimneys come out of huge kitchens. The Portuguese monarchs loved living in this palace. Built in the Middle Ages, it has survived to this day almost unchanged. 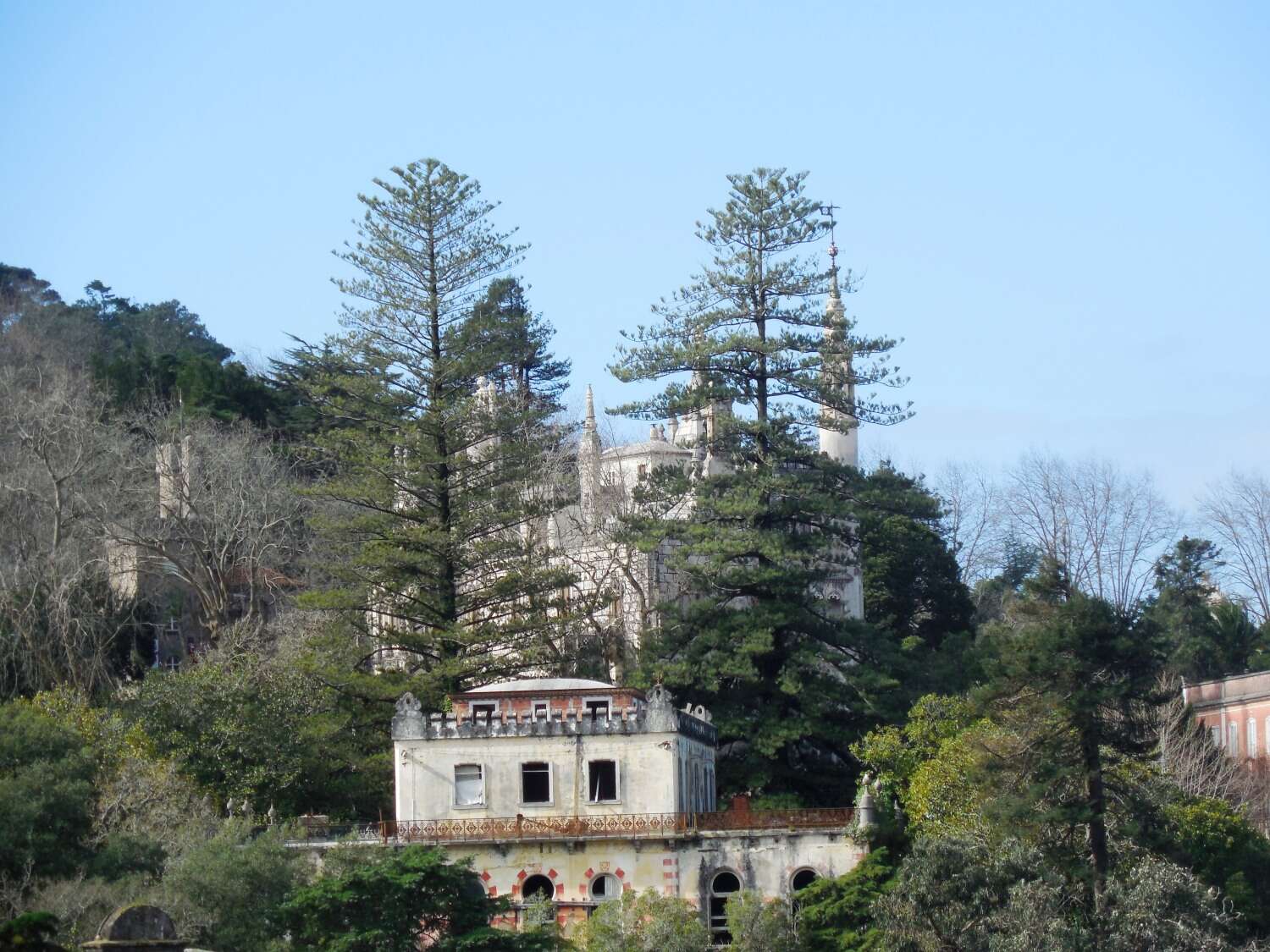 Palácio Nacional da Pena. It is impressive at first sight. On a high hill, there is a castle with bright walls: pink and ochre. And around it, there are terraces and parks, resembling a fairy-tale forest. You need to go up the hill to reach the castle. But you can get there on the bus number 434 as well. 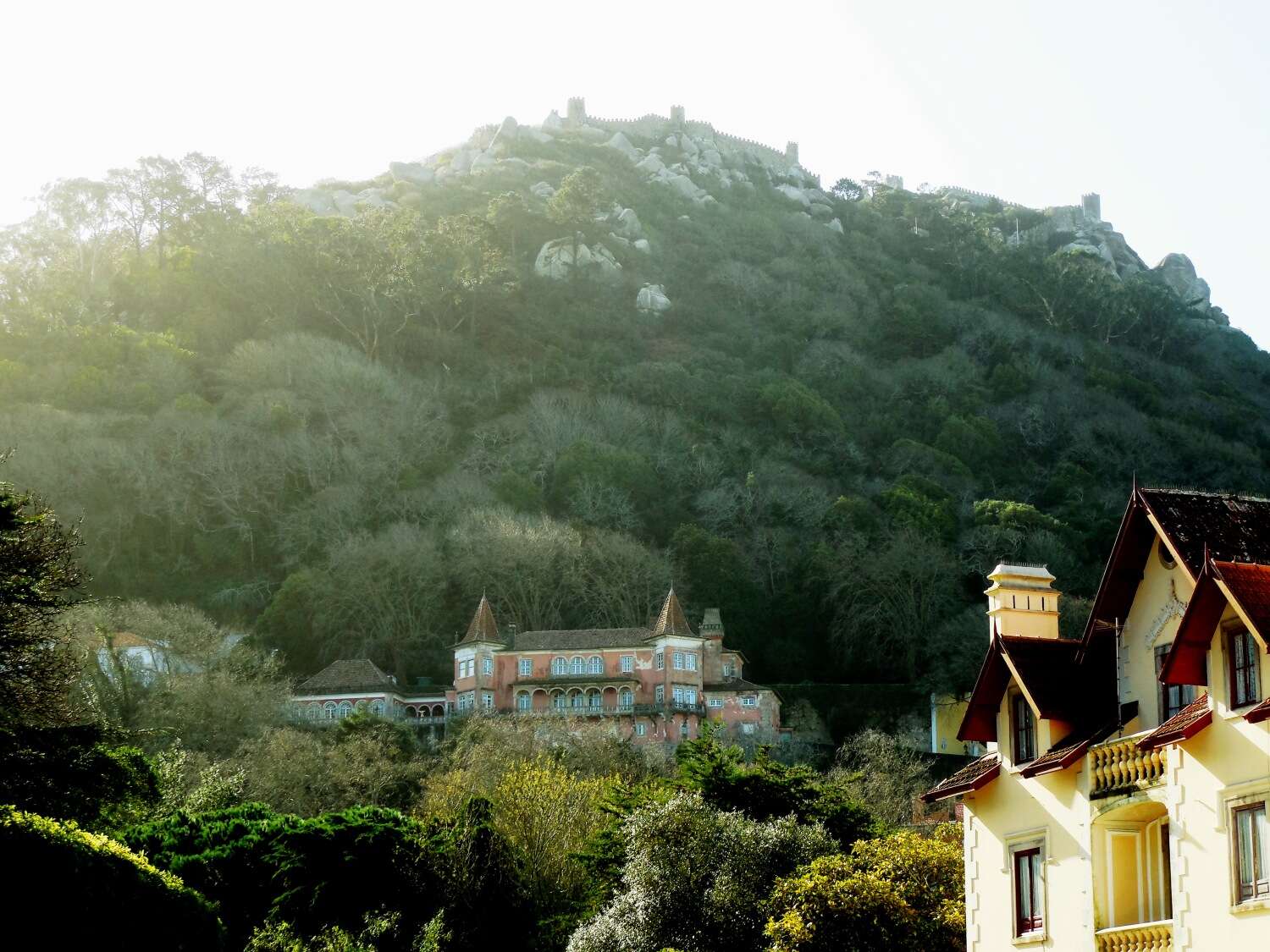 400 meters from the Pena Palace, there is the Castle of the Moors. Built in the X century, surrounded by impregnable walls, it is like a guard among the rocks. 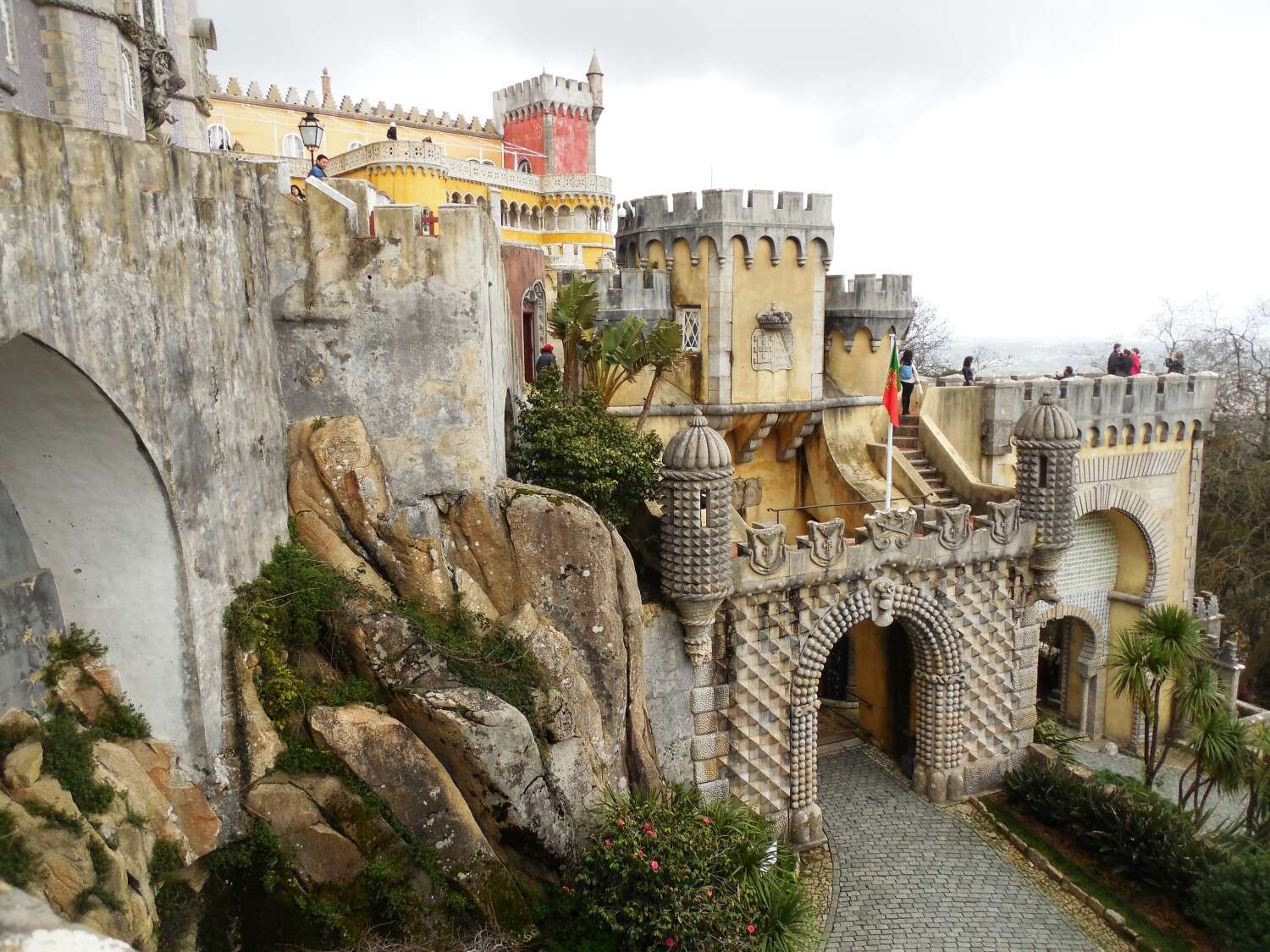 But these are not all the palaces of Sintra! Palace of Montserrat, the Palace of Quinta da Regaleira, Villa Sassetti - one day is not enough to see them all.

In order to see more, it is better to leave early. Palaces open at 9.30. 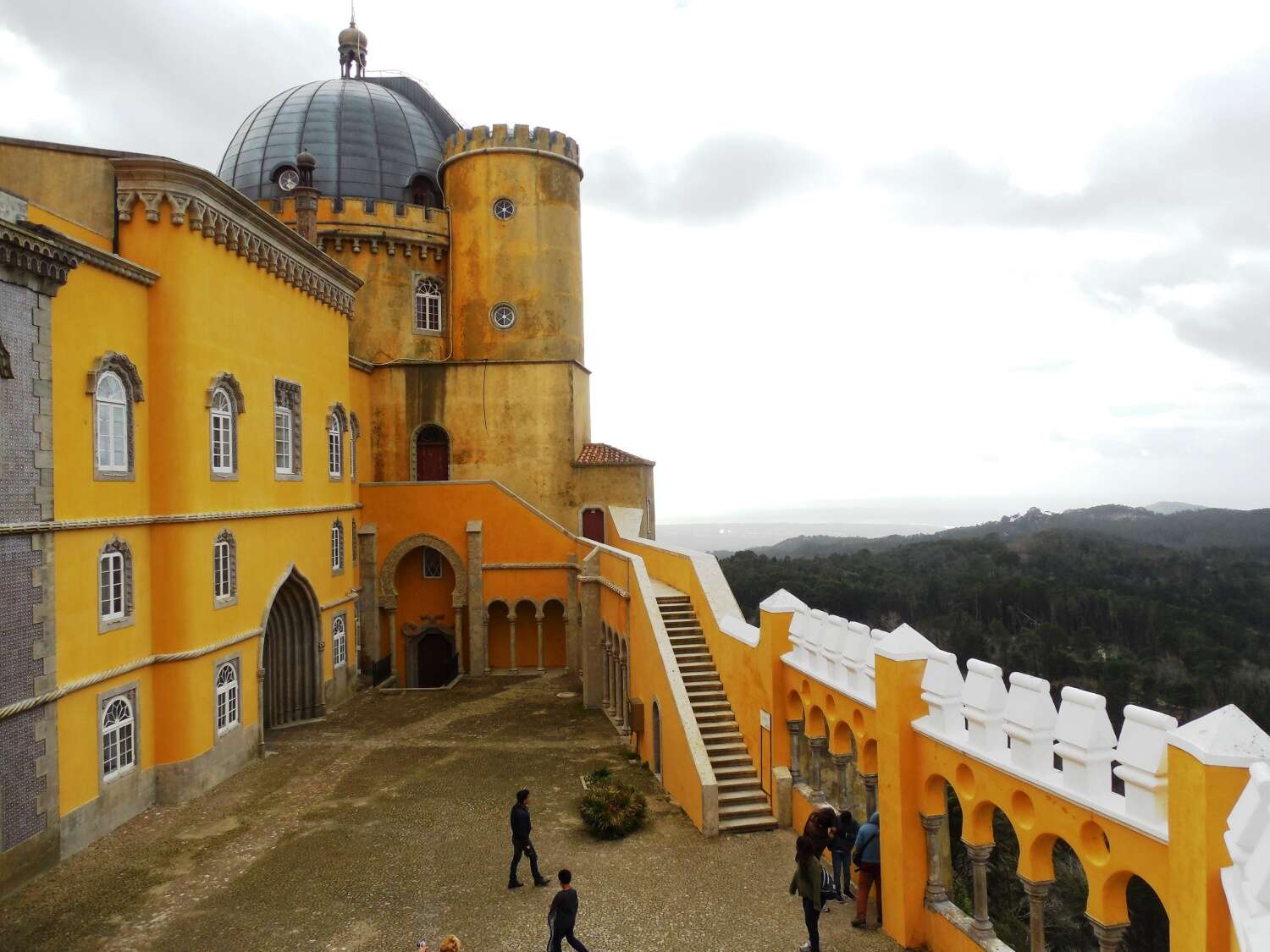 When you are full of royal life, it's time to go to the end of the Earth! Every half hour from 9 am to 7 pm, bus number 403 leaves from the stop next to the railway station. Check the schedule here. The distance from Sintra to Cabo da Roca is 18 km. You need to go about half an hour. The ticket must be composted on the bus. The letter "a" in the schedule means that the bus doesn't go over the Cape.

The second option - via Cascais:

The direct train to Cascais runs from the Cais do Sodré station in Lisbon. Trains depart every 12-40 minutes around the clock. Travel time is 40 minutes. You can buy a ticket both in a regular ticket office and in an automatic one. The schedule is here. From the same station, you can go to the beaches, which are located a few kilometers from Lisbon. 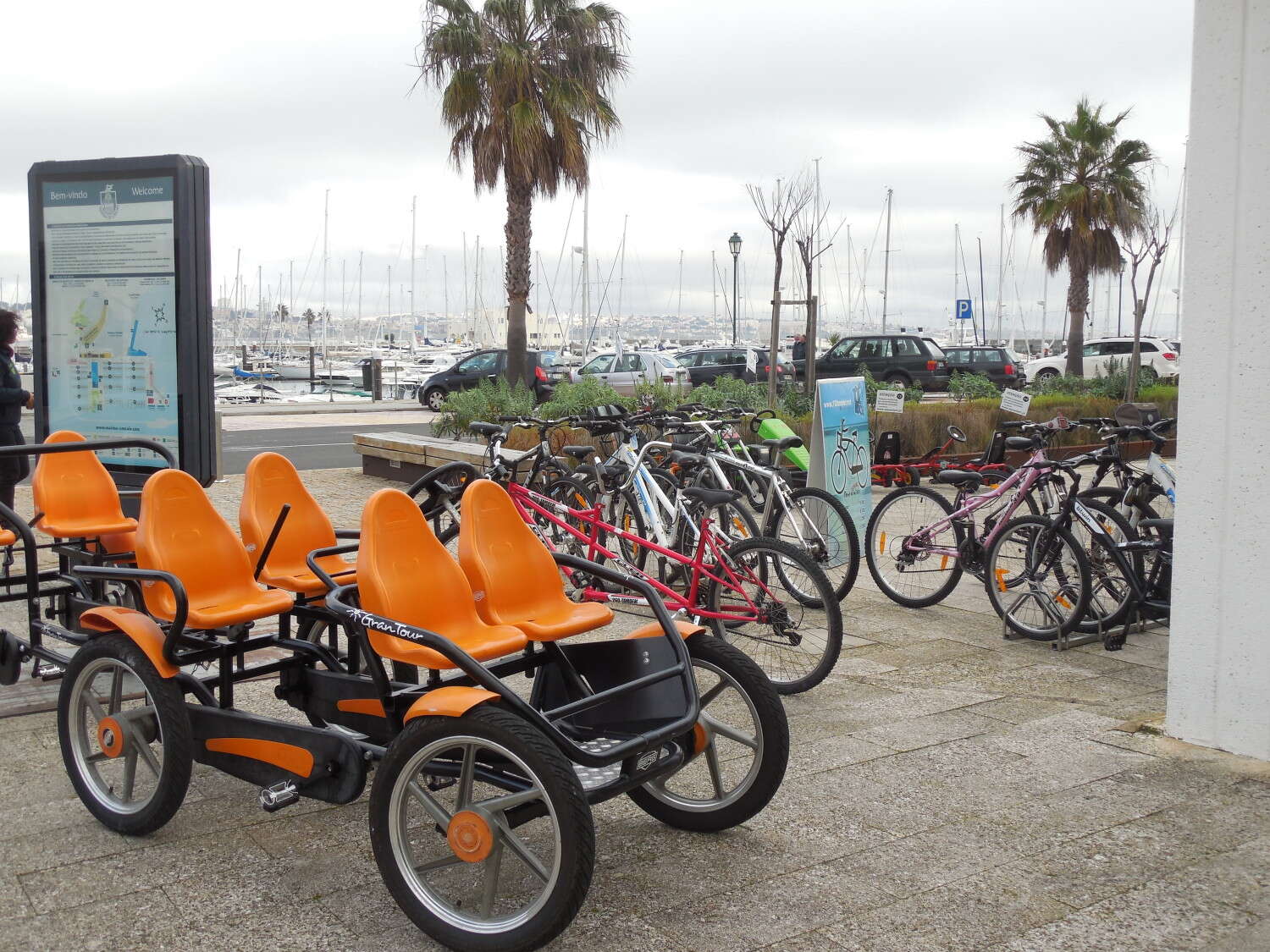 Cascais was once a fishing village. Then it was chosen by the local rich and courtiers. Nowadays, it is a small resort town with a beach, bay, marina, museums, monuments, a fort, a park, a lighthouse, a promenade and a cycle path along the ocean, hotels, cafes, restaurants. 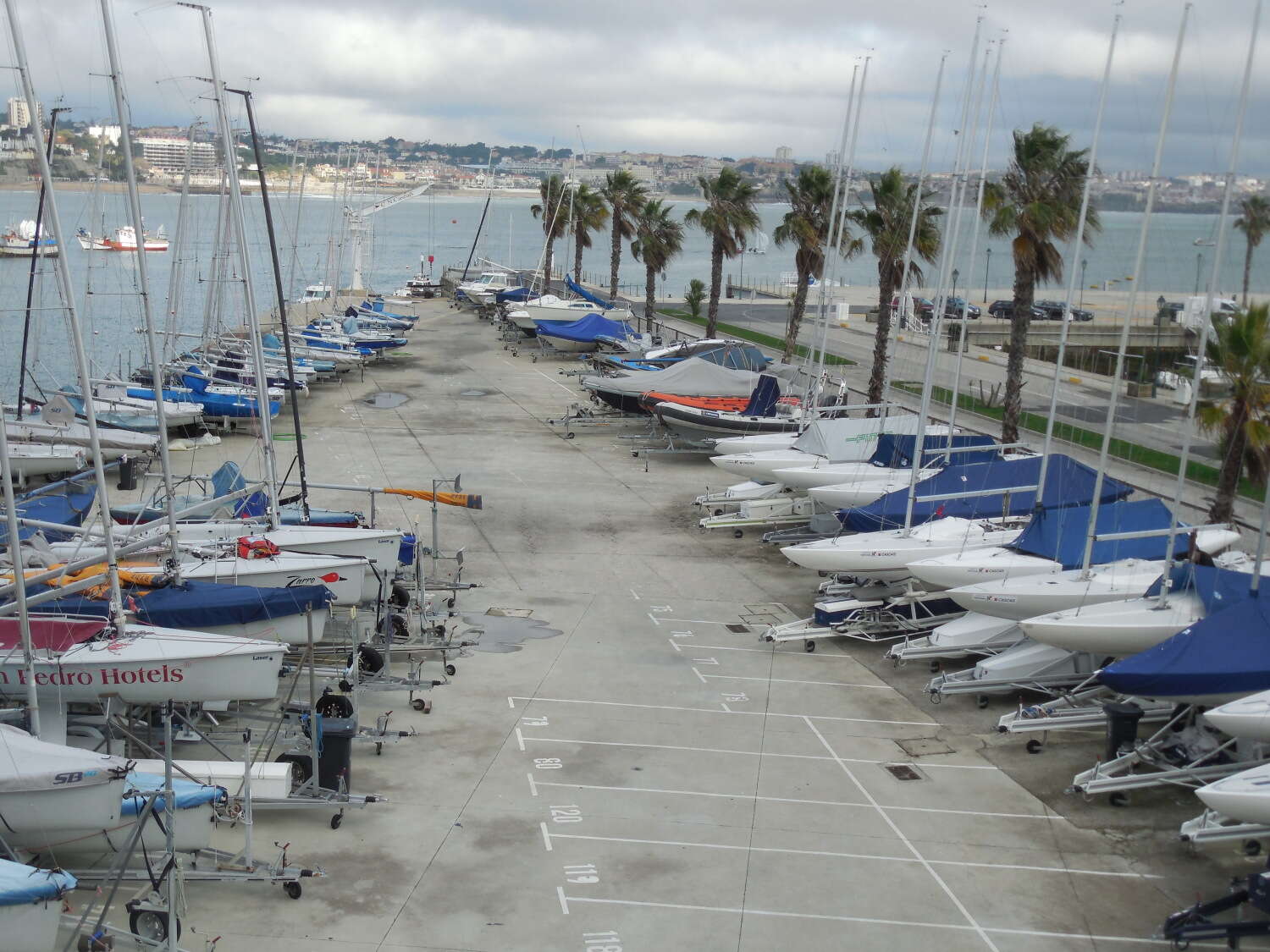 House of Saint Mary (Casa de Santa Maria). It was built in the last century. In the once private residence, which was visited by royal persons, there is an interesting museum now. It contains a large collection of azulezhu (ceramic tile) and painting. 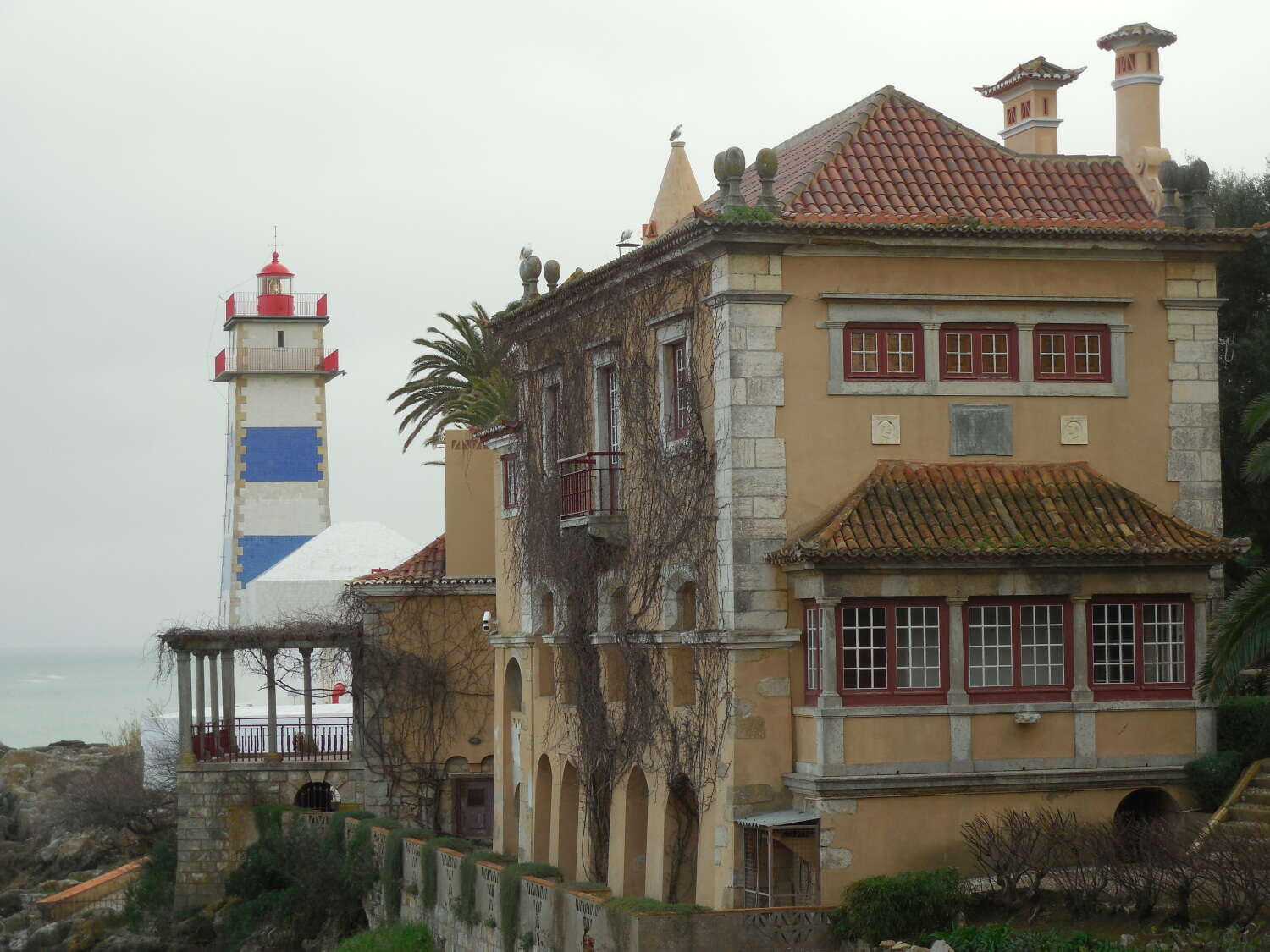 From the windows of the house of St. Mary, the lighthouse of the same name is to be seen. Except December-January, you can go inside, as there is also a museum associated with the history of lighthouses.

Nearby, there are quiet gardens with a duck pond, walking peacocks and a mansion, where a museum of antique furniture and works of art has been created. 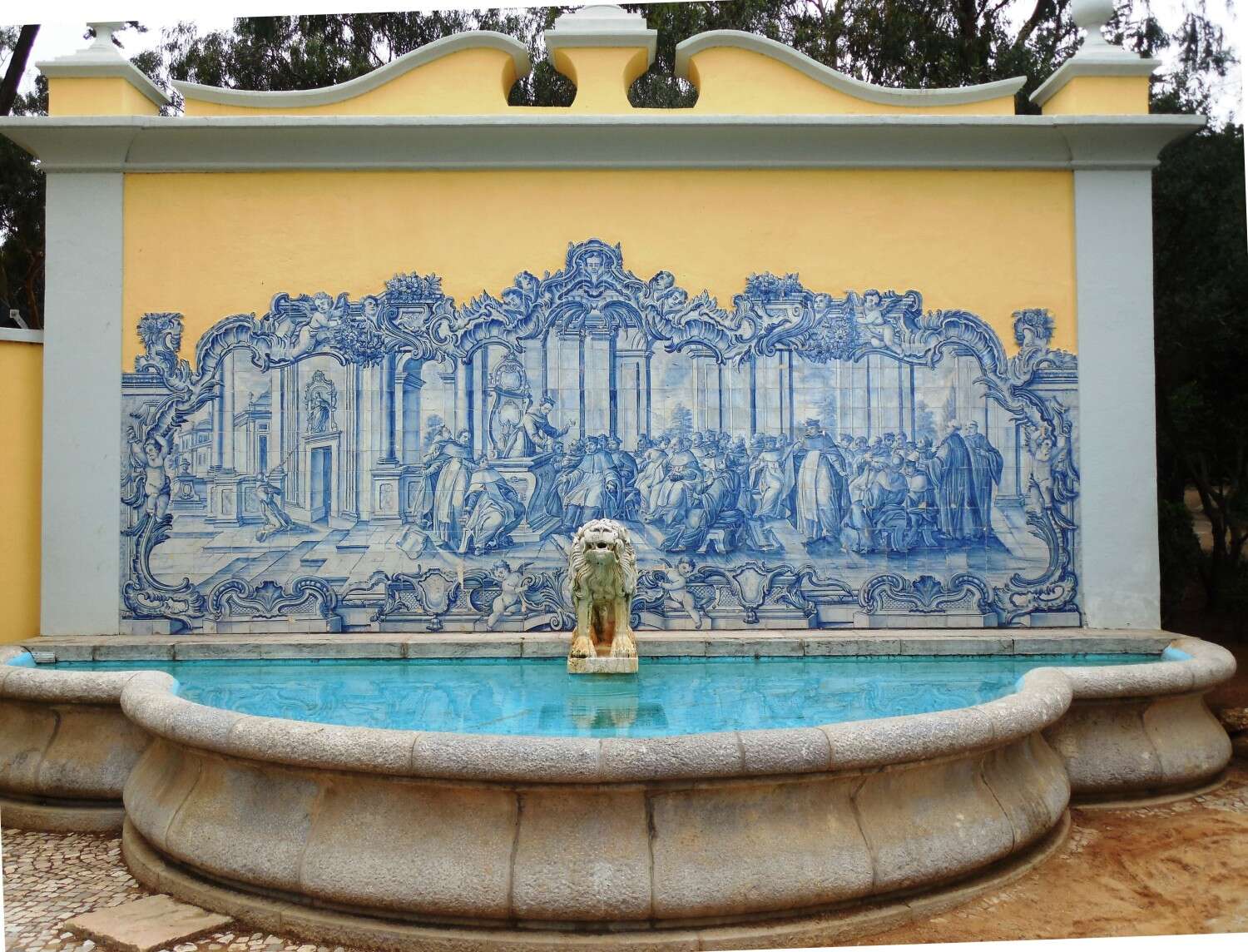 About two kilometers from Cascais, there is the Boca do Inferno, a cave ruined by Atlantic waves among weathered rocks. 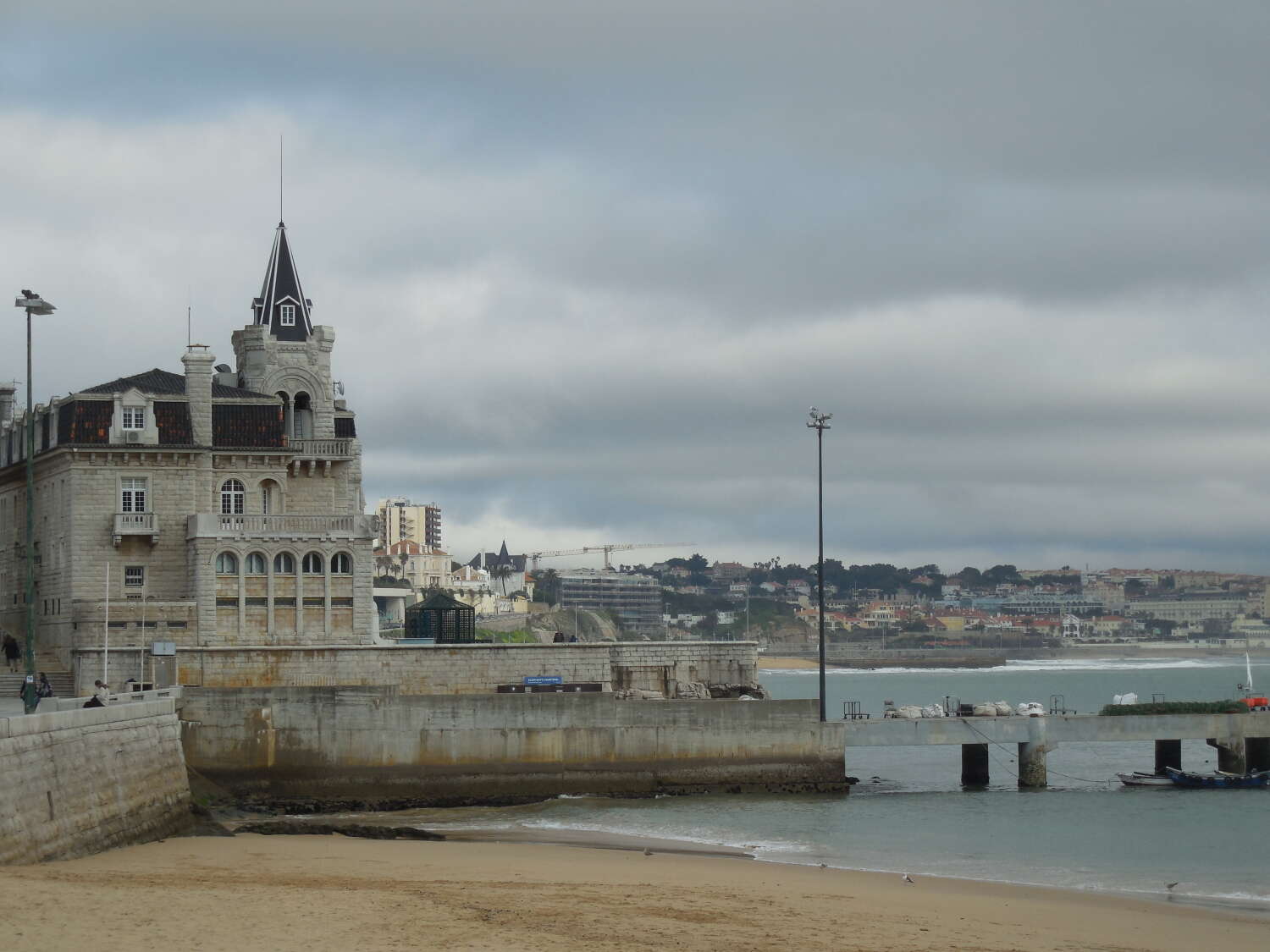 You can get to Cabo da Roca from Cascais by the same bus number 403. The Cascais Terminal bus station is located near the railway station, on the ground floor of the Cascais Villa shopping center. The schedule is here. In summer, buses run from 8.40 to 20.40. The way to the Cape takes 20 minutes.

Regarding the fare from point A to point B, it all depends on your route from Lisbon to Cabo da Roca. There are one-time tickets as well as combined or one-day tourist tickets. Examine all the rates here.

This is the scheme of the bus number 403, which travels to the end of the world.

P.S. Return from the westernmost point of Eurasia can be noted with a glass of port to the sounds of fado.