An Autumn Vacation: Ideas For An Exotic Trip

When we think about the future, we try to catch on to the brightest plans. How about making an exotic autumn mark on your calendar? And thus paint your autumn with most unexpected colors!

If you are in, Travellizy has prepared for you a bright palette of directions. 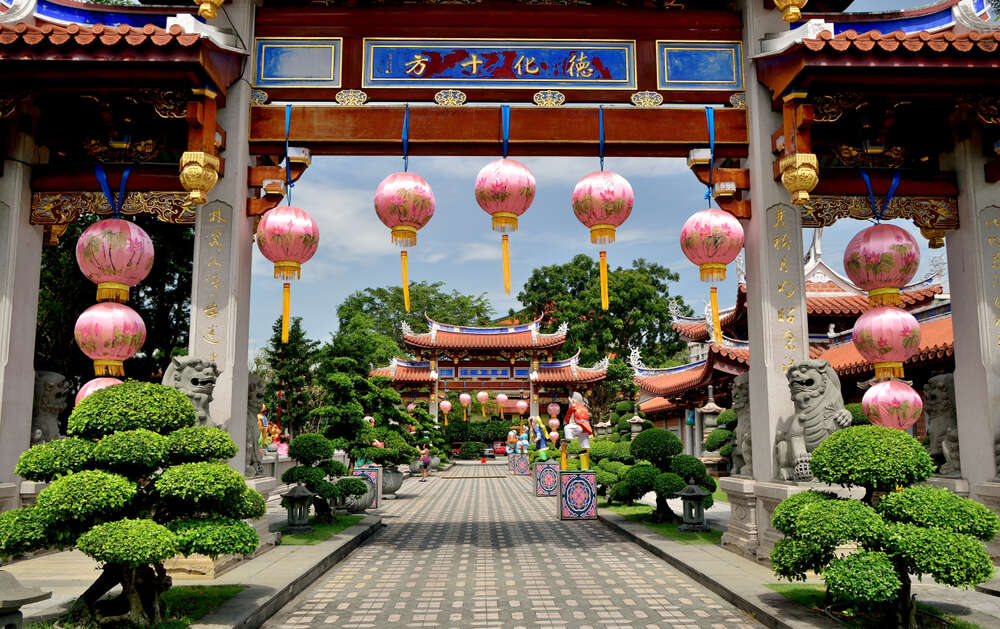 Singapore is one of the smallest countries in the world. Its area is 721.5 km². This is a place of amazing culture, oriental color, tropics, skyscrapers, entertainment complexes, and of course, picturesque beaches.

● Arriving in Singapore, you are immediately greeted by one of the attractions - the world-famous Changi Airport.

● Hotel Marina Bay Sands, with its luxury rooftop pool and a unique panorama of the city.

● Tropical island of Sentosa with a huge number of water parks, attractions and entertainment.

● Clar Cay Quay, which is the most popular place to walk, as well as the center of nightlife.

● Bukit Timah is a nature reserve located at the highest point of Singapore, on a 163 meter high hill. There is also the Botanical Garden and a park with lakes here.

● Gardens by the Bay is one of the main attractions of Singapore. Futuristic Gardens at the Bay occupy 101 hectares of land. They have three large gardens - South, East and Central. Walking through the grove among the giant fantastic trees, you can have dinner in an unusual restaurant. It is located on top of one of these trees. 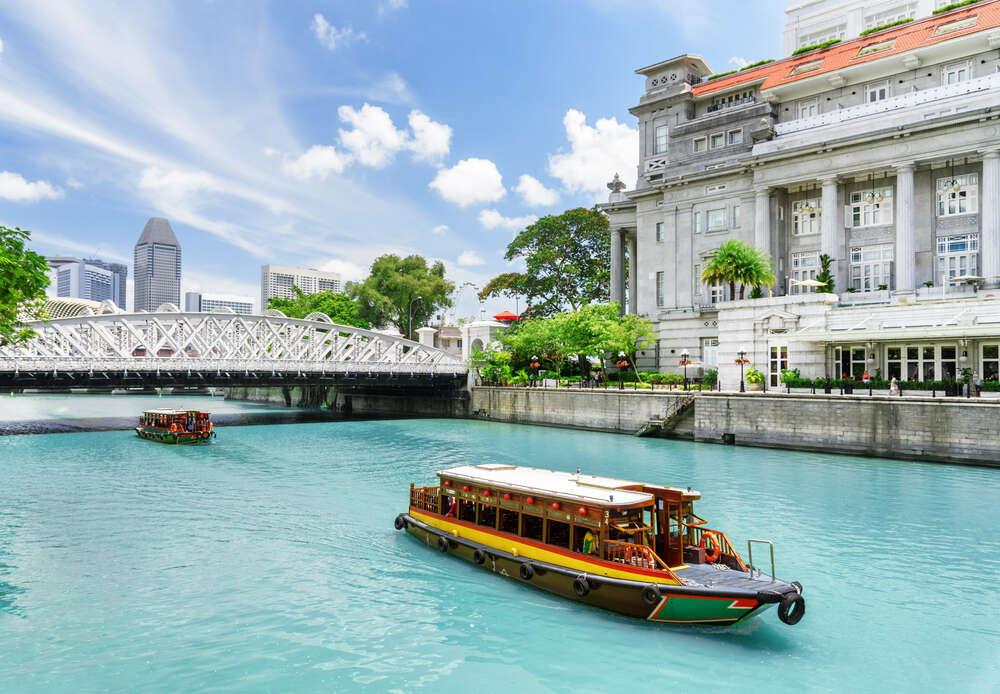 Prices: In Singapore, a budget vacation is quite possible. Price for a cappuccino is € 2.5. The average lunch for one is € 6. Dinner for two with wine is € 35. Ticket price in public transport - € 1,2. A room per day in a 3 star hotel will cost you approximately € 80.

Weather:  In September, the rainy season is almost over in the north of the country, but it is in full swing in the south or in the center. The temperature is quite high and reaches +30 degrees. September is not the best month for a holiday in Vietnam. But in October, the heat already subsides, and the weather becomes very comfortable. You can safely plan a trip to the northern part, where the flow of rains just falls. The air temperature is +27°С during the day. The southern part is fully prepared to receive guests. The air temperature is +28°C during the day. And the temperature of sea water warms up to +29°С. 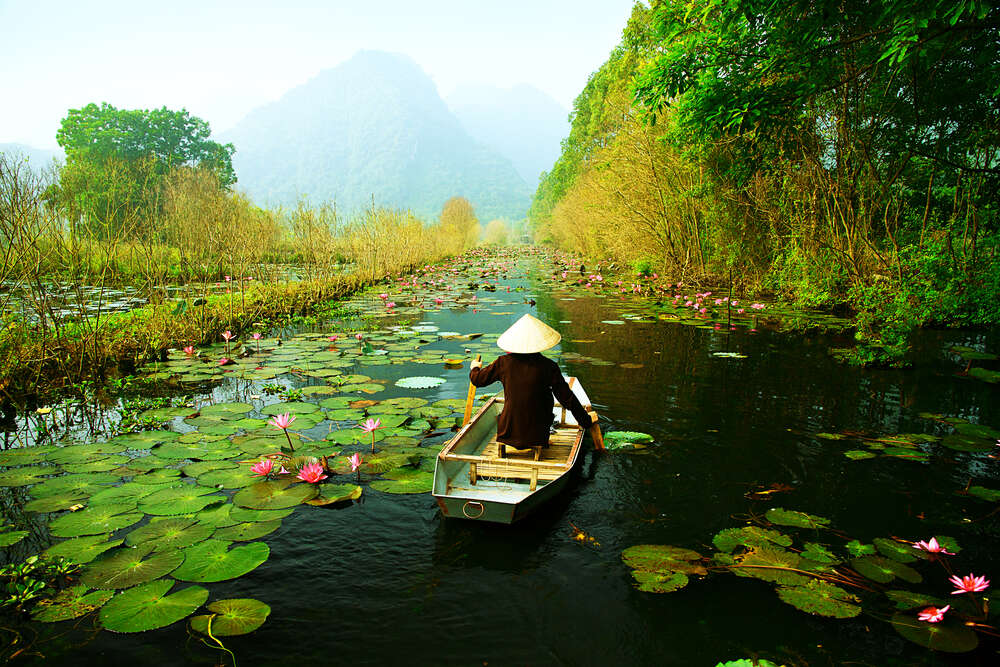 Vietnam is a country with centuries-old traditions and culture, with ancient Buddhist temples lost in the jungle, magnificent nature. You will find here exotic holidays at budget prices.

Hanoi is the capital of the country. Don't deny yourself the pleasure of a cycle rickshaw ride through the streets with old French houses. And go to the water puppet show one evening. The ticket price is € 4.5, and you will get unforgettable impressions. In the city of Hanoi, we recommend you to visit:

● Halong Bay, one of the most beautiful places in Vietnam. You might have already seen this bay on the postcards of this exotic country. The bay covers about 1,500 km².

● The Hanoi Citadel, the largest landmark in the country. Entrance to the fortress will cost you € 0.9.

● Ho Chi Minh Mausoleum. Ho Chi Minh is the president, who declared the independence of the country in 1945. The building of the mausoleum has a height of almost 20 meters and consists of 3 tiers.

● One Pillar Pagoda, an unusual monument, where the whole structure rests on one single pillar with a diameter of just over a meter.

● Hanoi Cathedral of the late 19th century. The style is very reminiscent of French Notre Dame. 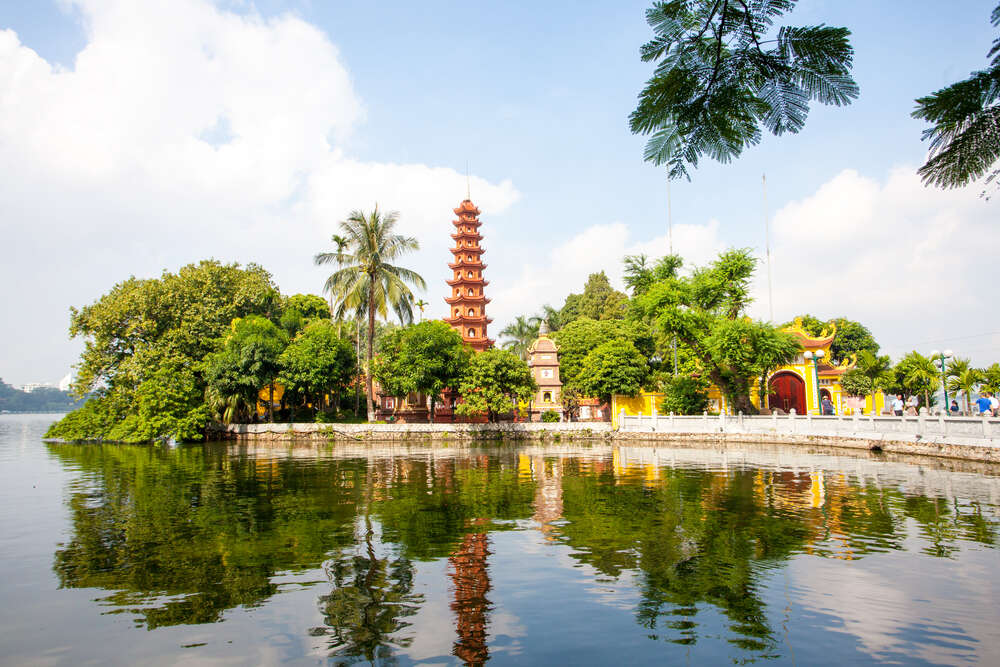 Weather: Autumn is a perfect time for staying in Tunisia. There are not so many tourists, the intense heat subsides. Prices become more enjoyable. In mid-autumn, the Mediterranean Sea doesn't have time to cool down and pleases tourists with comfortable +24°С. The average daytime air temperature is +27°С to +30°С. The nights get cooler, and the thermometer can drop to +17°С. 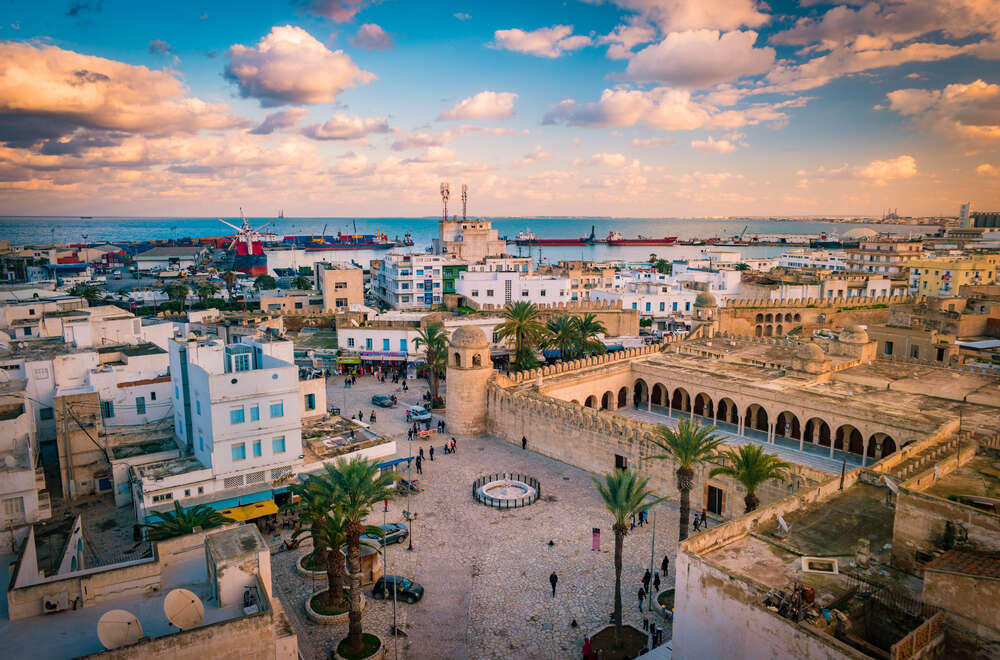 Tunisia is a country in North Africa, whose natural borders are the Mediterranean Sea and the Sahara Desert. It’s a country with an oriental color and a European approach to tourism service.

● Carthage is an open-air museum. Here are the ruins of the ancient city. A visit to Carthage can be combined with a trip to the incredibly beautiful blue and white city of Sidi Bou Said.

● Sid Bou Seid is located near Carthage, in the northern part of Tunisia. A small white and blue town will not leave any traveler indifferent.

● Sahara Desert is one of the main and obligatory places to visit. It is better to go here for a two-day excursion. On such a trip, you will visit El Jem, the Colosseum, the town of troglodytes, the lake of death, the mosque and the filming locations of Star Wars. Across the Sahara, locals bring camel tourists. The cost of such an excursion is € 135 (2 days).

● Atlas Mountains. They divide the coastline of the Sahara. It's a very picturesque place. Here you can see the real oasis in the desert.

● Matmata Cave City. The local people are Berbers, who build their houses in the form of a half-dugout. This city was also the film set for the famous Star Wars. 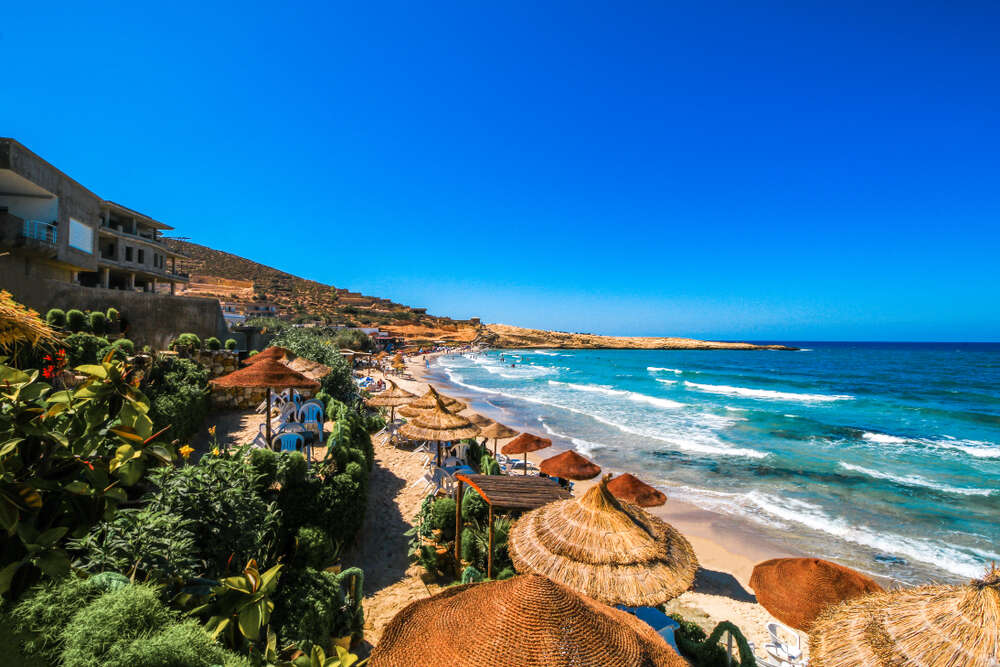 Weather: It is better to plan autumn holidays in Cambodia in October. September can disappoint you with rains. But the second month of autumn pleases with an increasing number of sunny days. In the city of Phnom Penh, the capital of Cambodia, the air temperature during the day is +30C and +26°C at night. The temperature of sea water is +27°C. 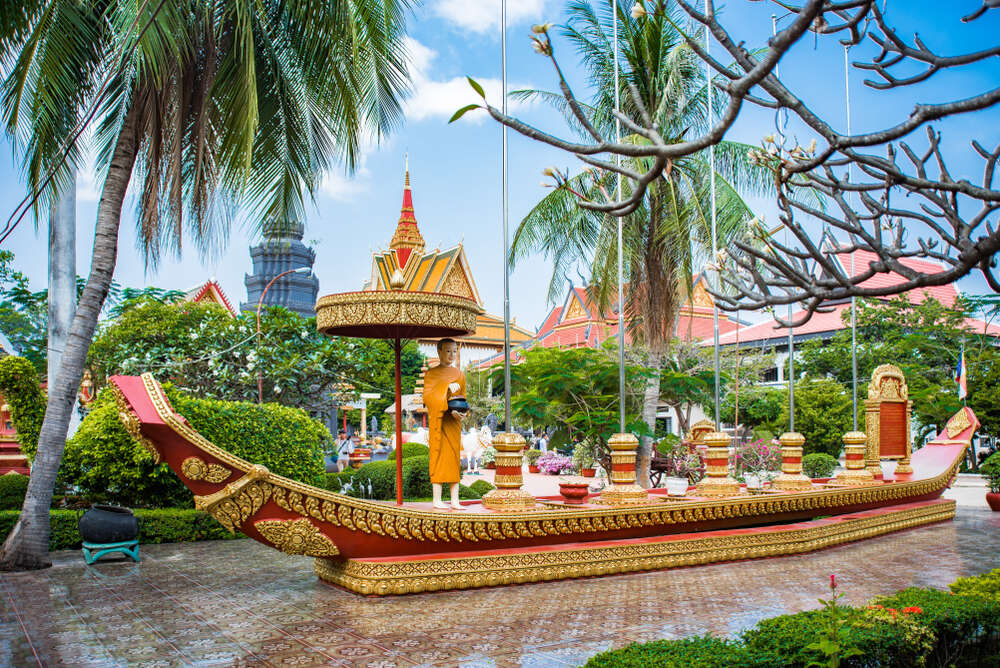 Cambodia is a country of gorgeous beaches and wildlife, hundreds of palaces and temples of ancient Angkor, parks and lakes. And this is a country where you can have a good meal, literally having a dollar in your pocket. Here, for 1 American dollar, you can get an amazing 20-minute fish pedicure or an appetizing fried ginger frog. You have to admit, it sounds like an intriguing vacation plan.

● Angkor Wat Temple (5 km from Siem Reap) is the main attraction of Cambodia. This is a temple complex built in the XII century. It is protected by UNESCO. The temple area is 2.5 km². It is the largest temple in the world and is considered to be one of the most beautiful places on the planet.

● Royal Palace (Phnom Penh). The palace complex is located on the bank of the Tonle Sap River and covers an area of 402 by 435 meters.

● Silver Pagoda (Phnom Penh). If your path lies through the capital, you should definitely visit the Silver Pagoda (also known as the Emerald Buddha Pagoda). It consists of gold, more than 2 thousand diamonds, several thousand silver plates ... and these are not all materials, from which this temple is built.

● Wat Banan Temple (20 km from Battambang) is the so-called reduced copy of the Agkor Wat Temple. The temple is located in a very picturesque place. It is on top of a hill with a beautiful view of the Sangkar River and surroundings. In order to climb to the temple, you will have to overcome a staircase of 358 steps.

● Tonle Sap Lake (10 km from Siem Reap) is floating villages on the water. About 200 thousand people live in such villages. Local people live in floating houses throughout their lives. There are schools, shops, cafes and even police stations.

● Ream National Park (18 km from Sihanoukville) with an area of more than 200 square kilometers. Jungle, mangrove forests, several islands, the sea coast and the river delta are located on its territory. 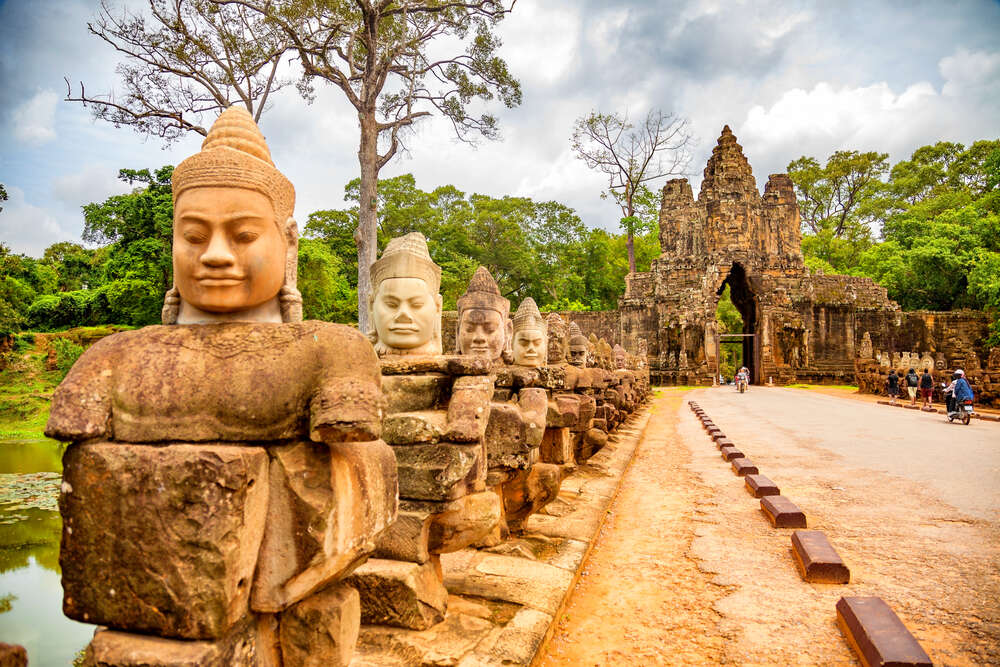 Prices: An inexpensive lunch for one here costs € 2. Dinner for two with alcohol is € 18. You can stay in a 3 star hotel room on average from € 30. But despite the lack of good infrastructure and bad roads, the fare in public transport is € 1.8.

The Dominican Republic is a state in the Caribbean, located on the island of Haiti. People come here for the magnificent beaches that Columbus himself admired centuries ago. Undoubtedly, the main attractions of the Dominican Republic are beach resorts and bounty-style beaches.

● Los Tres Ojos Natural Park, or Three Eyes (Santo Domingo). In the park you will see caves with stalactites and stalagmites, an aquarium, a zoo, grottoes, where there are three lakes with dark blue water at a depth of 15 meters.

● The Columbus Lighthouse (Santo Domingo, Parque Mirador Del Este) is one of the attractions not only of the city, but of the entire Dominican Republic.

● The Columbus Palace (Santo Domingo) is located above the Osama River on the Plaza of Spain in the historic center of the city.

● Las Damas Street (Santo Domingo) is the oldest in America. It's the first paved street, where the first two-storey mansion on the territory of South and North America was built.

● Del Este National Park (La Romana Province). The national park consists of the mainland and the small island of Saona, which is also called Bounty Island.

● Samana is a peninsula and a bay with wild beaches and incredibly clean white sand.

● Pico Duarte is the highest mountain of the island. Its height is 3098 m. The path to its ascent begins from the town of Constanza. This is the perfect place for mountaineering fans. 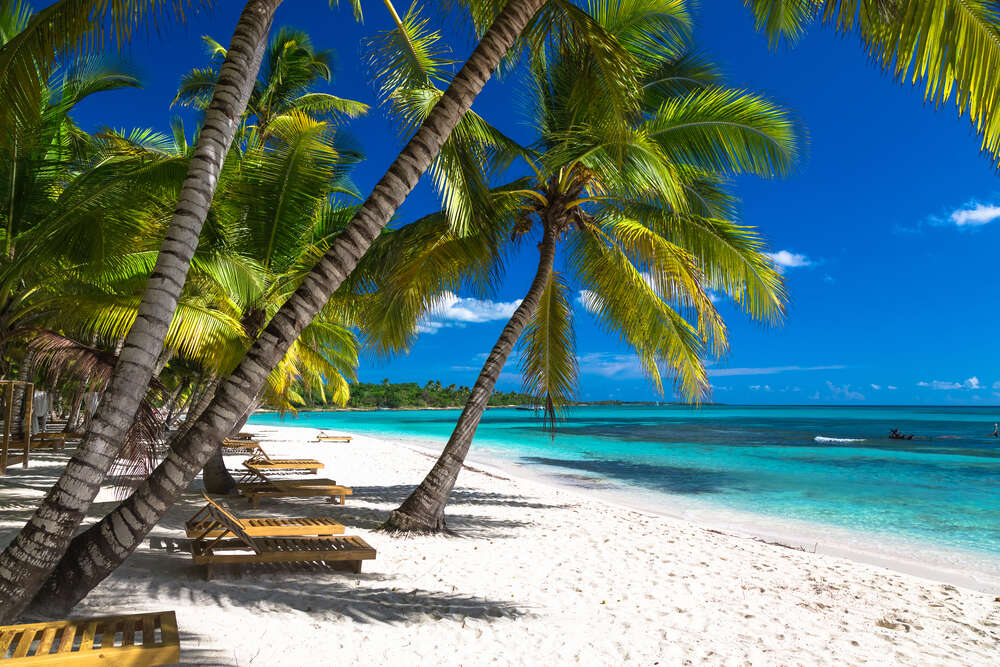 Prices: A cup of cappuccino in the resort of Punta Cana will cost € 1.5. An inexpensive lunch for one is € 10, and a dinner for two with alcohol is € 35. Ticket in public transport is € 0.8. Prices for accommodation in a 3 star hotel start from € 65 per night. 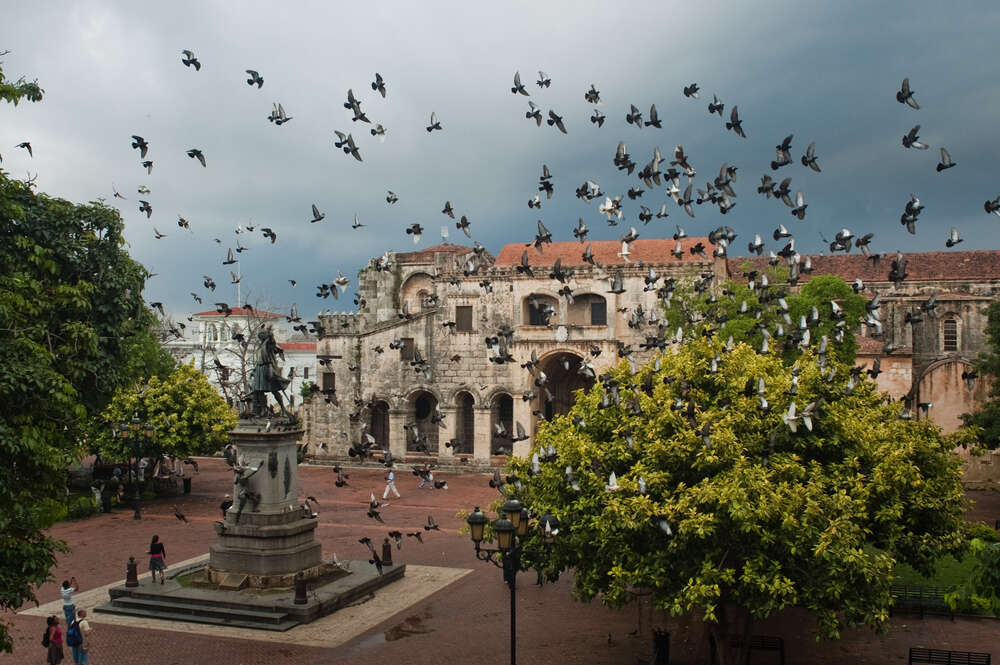 Each of these countries is unique, but they all have one unifying feature - this is absolutely not a classic trend for tourists at the moment. Would you like to truly experience the exotic? Start from one of these areas!