24 hours in Bratislava: a route through the main attractions

Bratislava is one of the youngest capitals in the world, and many people associate it with the film Eurotour, where the main characters arrived in the city with almost no money, but everything was so cheap that they settled in a five-star hotel and had fun like millionaires.

Travellizy Team has checked, that there are average European prices here, but if this turned out to be true, Bratislava could become the most visited city. The capital of Slovakia is often a transit point on the way to more popular European cities, although it also deserves attention. In a new article, we will tell you what to see in Bratislava in 24 hours.

Start your walk through the historic center with the Old Town Hall, the main square and its main attraction. Arrange yourself a small quest and find the popular statue called Man at Work (Čumil) at the intersection of Panská, Laurinská and Rybárska brána, one of the busiest places in the Old Town. Also on Rybárska brána, there is an interesting life-size statue of a man, who greets passers-by with a hat in his hand. And it looks very realistic. 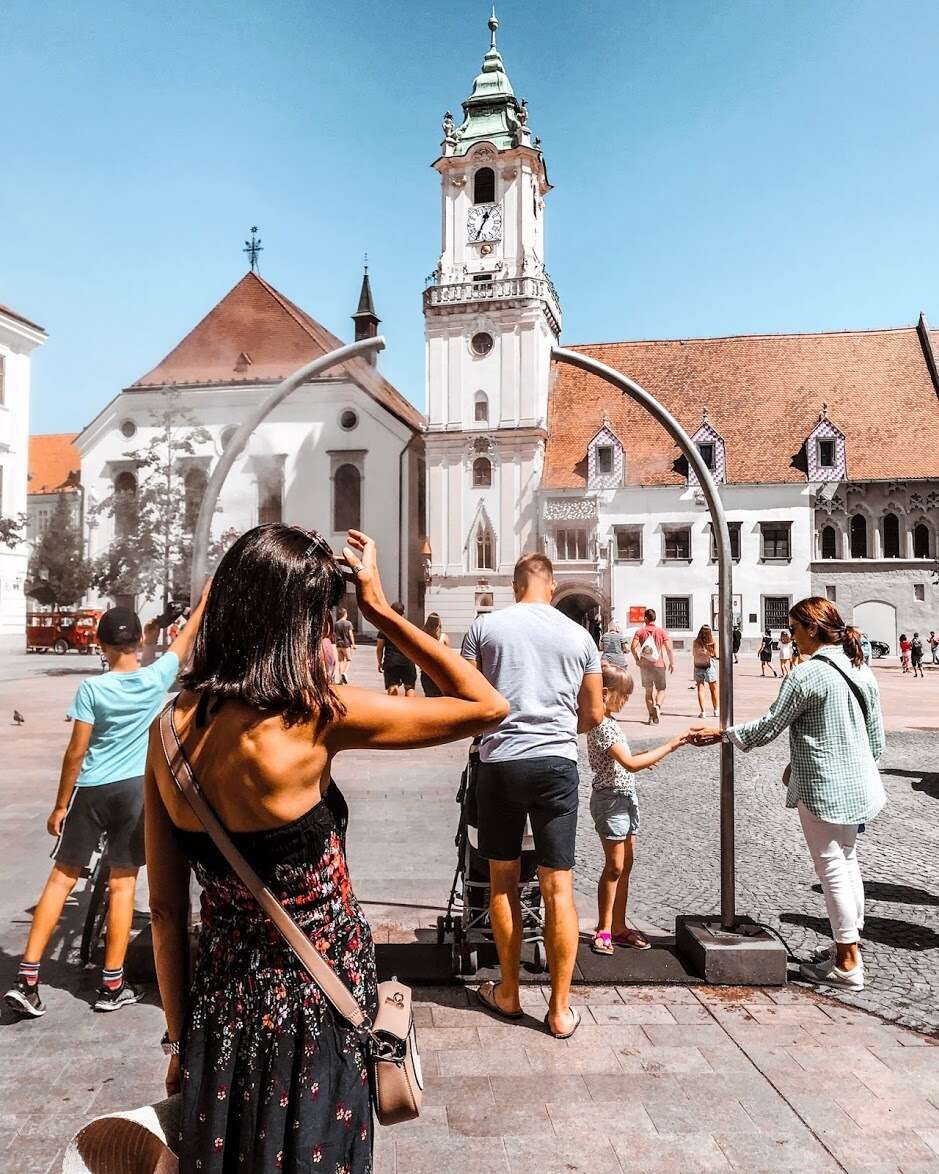 One of the most important symbols of Bratislava is the Michalska Tower and the only surviving Michalska Gate with fortifications of the 1300s. Nowadays, there is the Museum of Arms, and from the height, the tower overlooks one of the oldest streets, also called Michalska. The landmark under the tower is zero kilometer, which shows the distance from other cities to Bratislava. 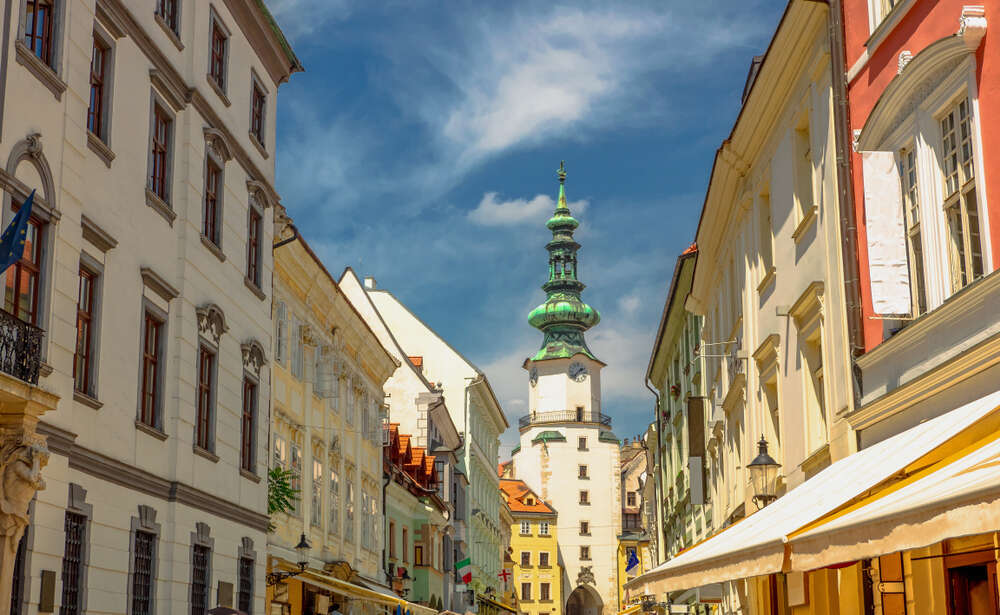 St. Martin's Cathedral: what to see in Bratislava

In any capital, there is a church or cathedral, which is considered to be a local attraction and appears in various what-to-see ratings. Bratislava is no exception, so we recommend you to look into the Gothic St. Martin's Cathedral, the largest and oldest church in the Slovak capital. 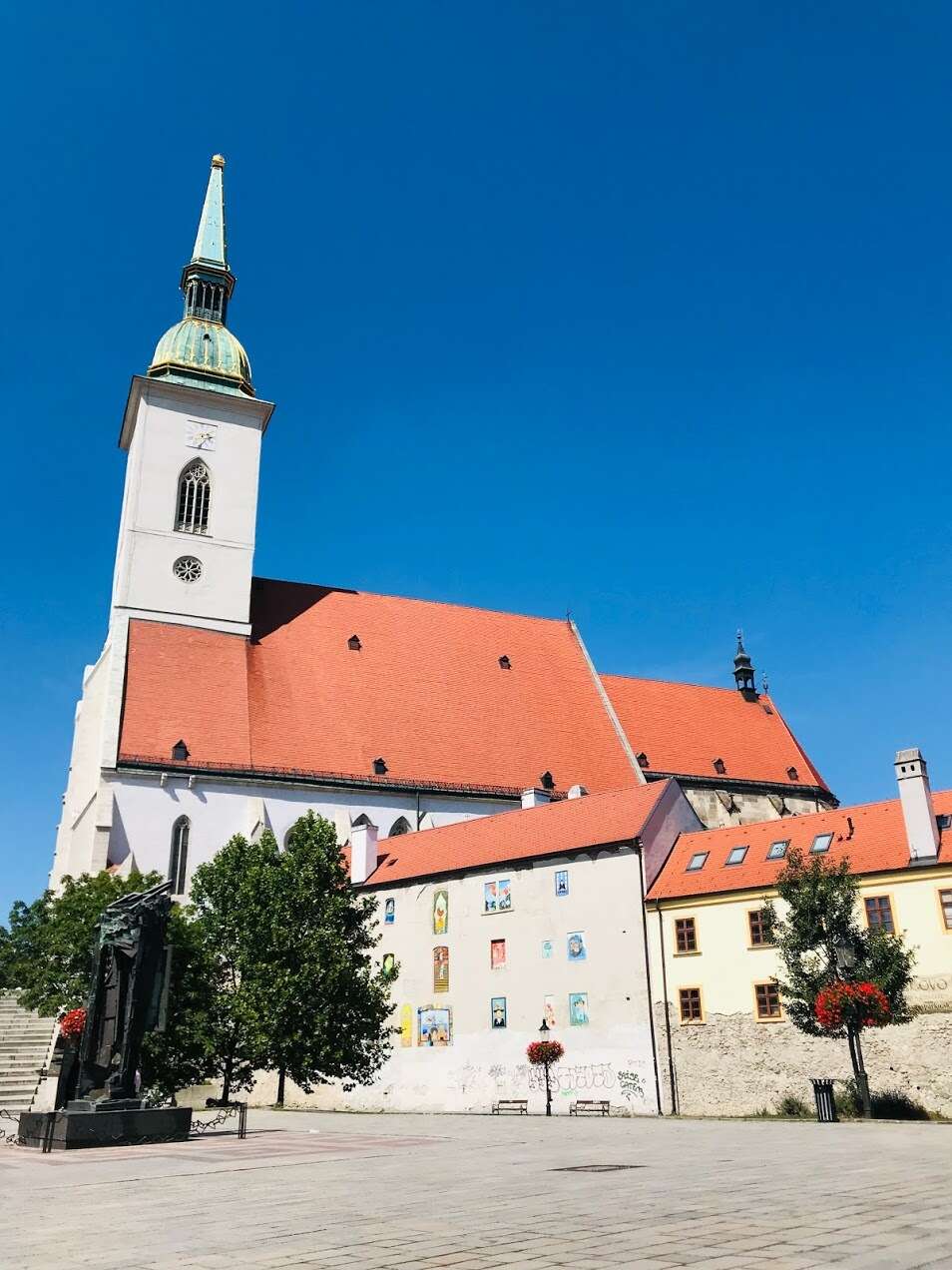 Bratislava Castle: how much is the entrance

It is hard to miss the main attraction of Bratislava, because it is a huge castle on top of a hill that rises above the Danube River. Bratislava Castle is also included in the list of national cultural monuments of Slovakia. It is this hill that offers stunning views of different parts of the city. 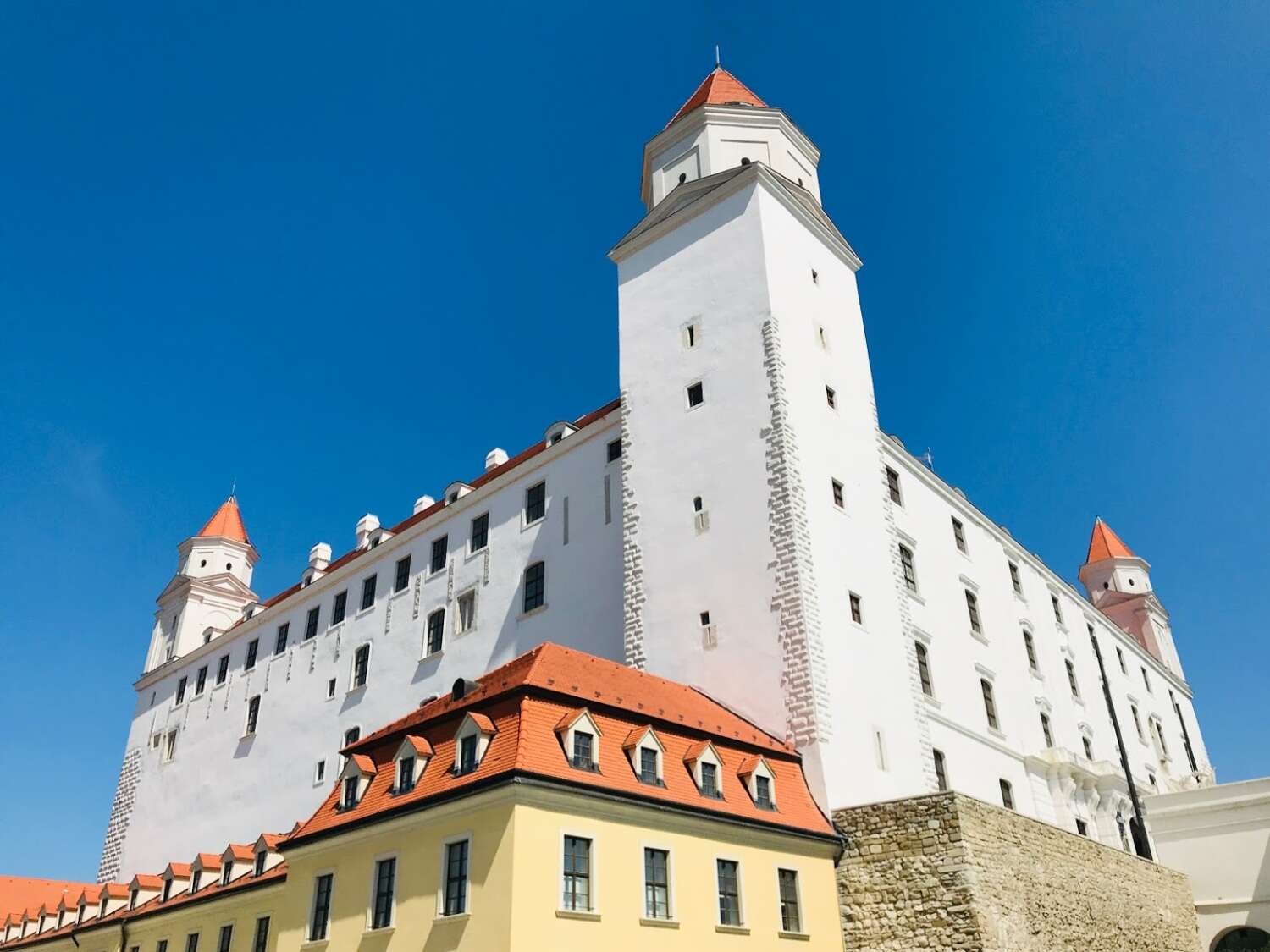 You can see from here another observation platform, but you need to pay for it. The UFO-shaped building is the highest point in Bratislava, at the top of which there is also a restaurant, where you can have a cup of coffee (€ 3.30- € 4.10) and enjoy the beautiful panorama. 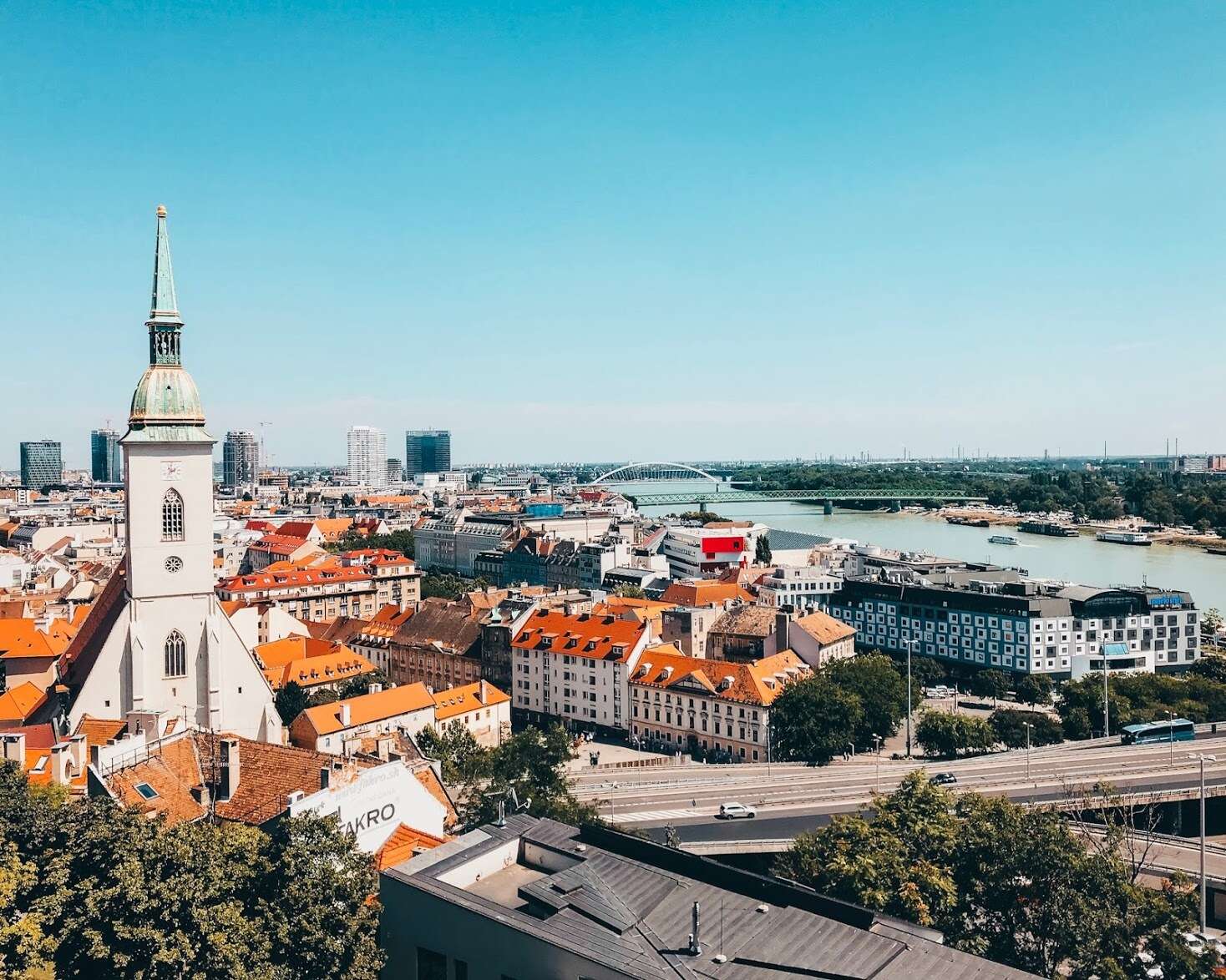 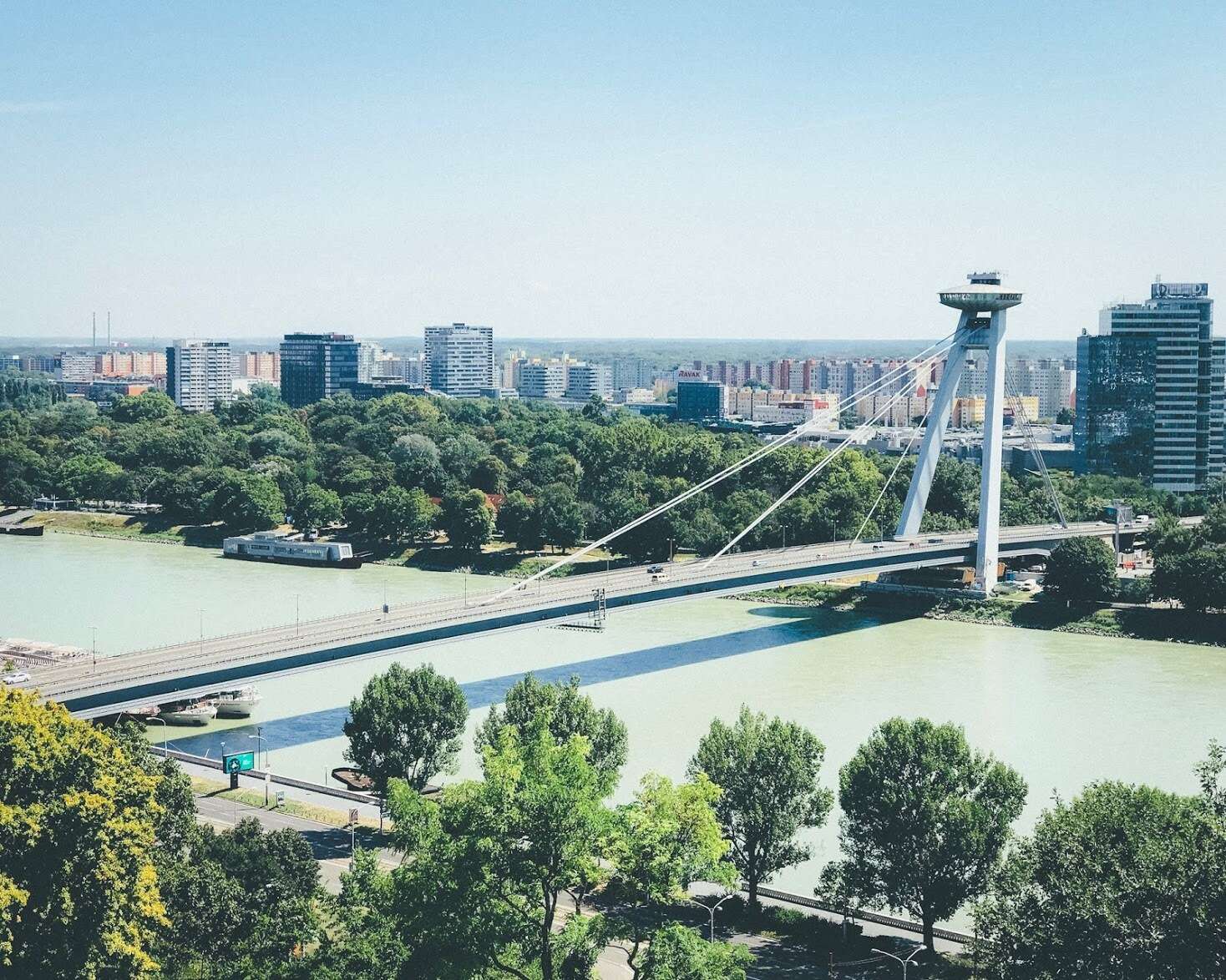 The most beautiful castle in Bratislava: how to get to Devin Castle

Two other sights of Bratislava are located far from the city center, so if you have only 24 hours, you need to choose where to go. Fans of nature walks are advised to visit Devin Castle, and those who prefer art should go to the Danubiana Meulensteen Art Museum. 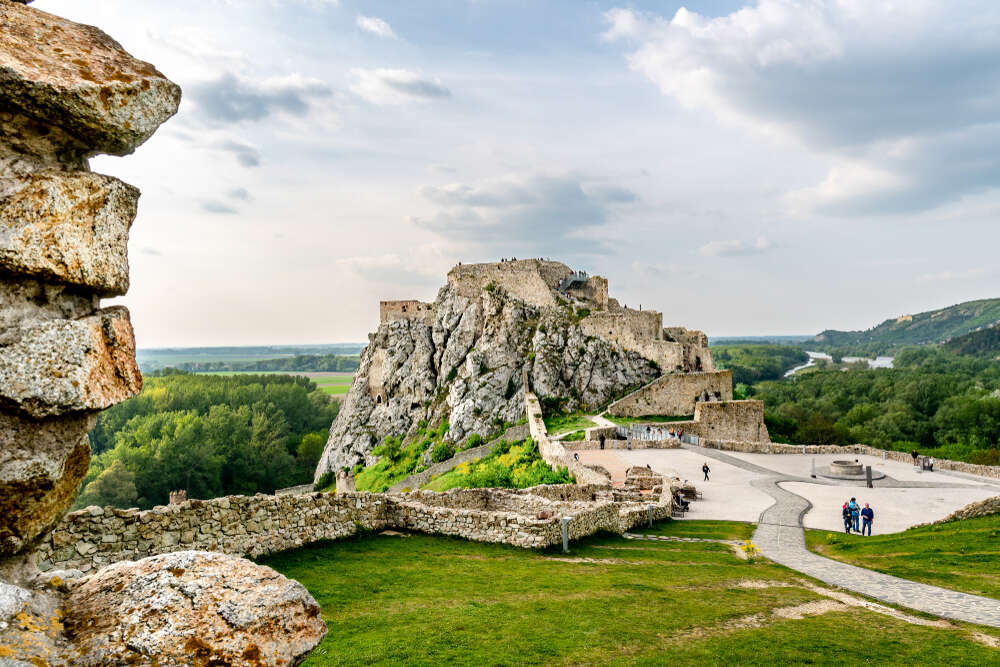 Devin Castle is located 10 km from the city center on a cliff among picturesque landscapes, and it rises above the confluence of the Danube and Morava rivers. The entrance ticket costs € 5 for adults, € 2.50 for children, students and pensioners, there is also a family ticket for € 10.

Danubiana Meulensteen Art Museum is 20 km from the center and is one of the youngest museums of modern art in Europe. In addition to fashionable works, a nice bonus is the unique view of Bratislava, the Little Carpathians and the Danube River from the roof of the museum. The entrance ticket costs € 10 for an adult, € 5 - for students and senior citizens, € 20 - a family ticket (2 adults + 2 children), children under 6 years of age and pensioners after 75 years of age can enter free of charge.

Bratislava is perfect for a weekend trip, cozy and atmospheric, it makes you want to slow down and walk leisurely along the streets of the Old Town.