Among the places visited by tourists in any country, cemeteries occupy a special place. In San Francisco, a city known for noisy parties, crowded streets, and constant traffic jams, there are almost no cemeteries: there is one left for army veterans and the second, very small, at the Mission Dolores (we wrote about it in another article).

Today, Travellizy Team will share with you travel notes about the town of Colma, built specifically to preserve the eternal peace of the deceased residents of Bay Area.

The dead move, the living people pay for the move

At the beginning of the twentieth century, the municipality of San Francisco faced the problem of centralized urban construction: the city grew like weeds. Tens of thousands of people from all over the world settled here, started their families, grew old, and died The city was built without regard to such growth, and new houses were erected next to fresh graves. Doctors sounded the alarm and, thanks to the efforts of educated people, together with the owners of expensive real estate, in 1912, it was decided to ban burial within the city limits. The existing graves should have been moved to another place, created specifically to care for the hundreds of thousands of deceased residents of San Francisco and the surrounding area. And so the idea arose, thanks to which, 12 years later, the town of Colma (San Mateo County) appeared on the map. All of its infrastructure works exclusively for the maintenance of cemeteries. 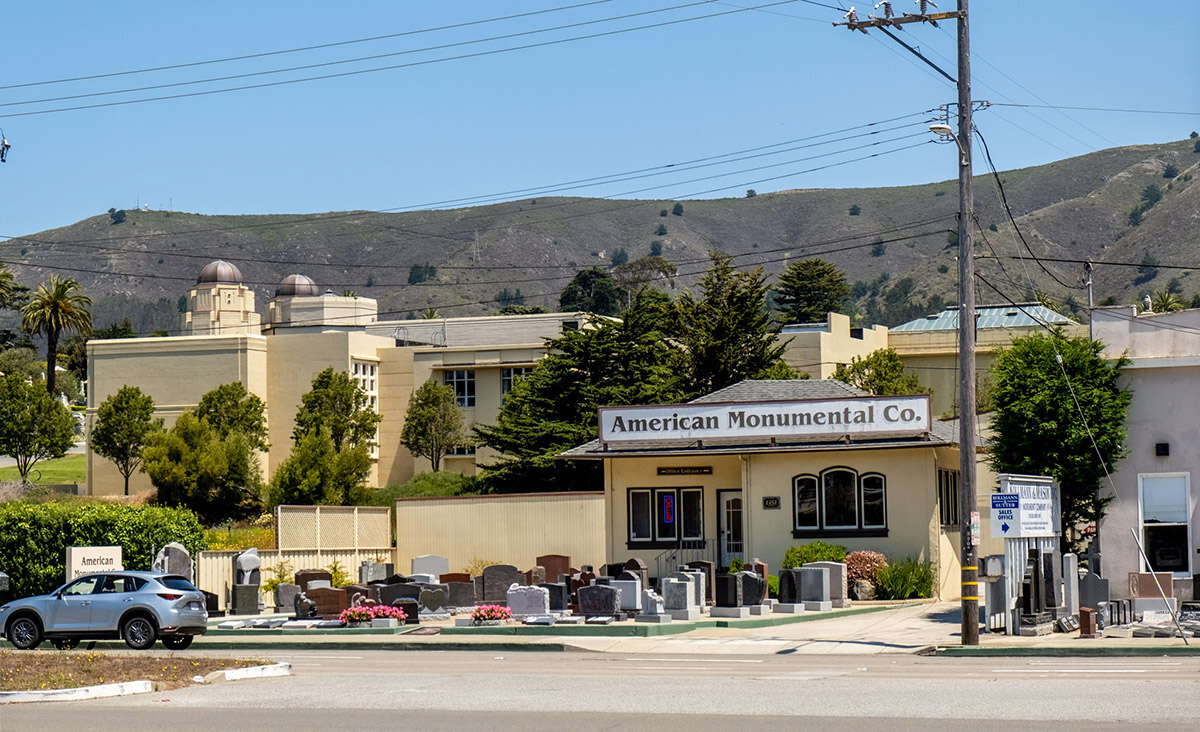 The transfer of the graves from San Francisco took about twenty years. During this time, more than 150 thousand remains were transported to Colma. The reburial cost was $ 10 (roughly $ 250 in today's prices). Those remains, for which no one paid, were placed in mass graves, and gravestones were used for city needs.

Colma is located in the south of San Francisco, and the IT capital Palo Alto is half an hour's drive away. The heart of the famous Silicon Valley and the world-famous liberal city pump fresh blood into these lands. And when the lives of their inhabitants end, they find their last refuge in the hills of Colma. 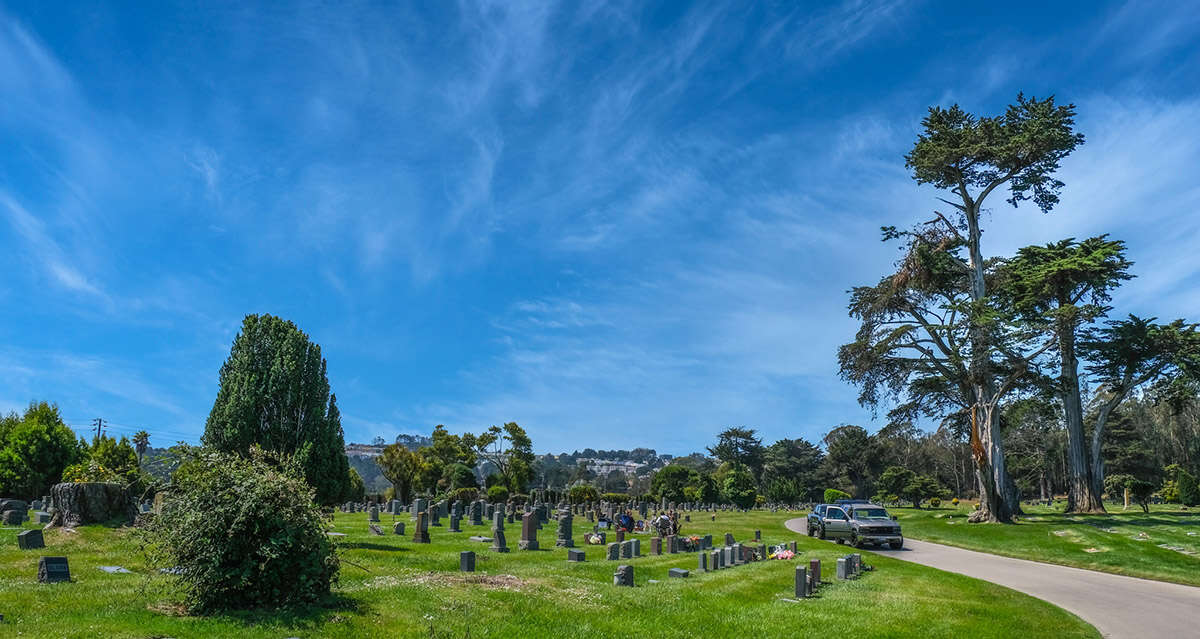 The population of Colma is about 1800 people, most of them work in 17 cemeteries that are under the administration of the town. The total area of ​​Colma is 4.9 km², of which 70% are cemeteries.

There are already 1.5 million graves in this quiet necropolis. If you do basic math, there are about one thousand dead people for one living inhabitant of Colma. The townspeople have long got used to this situation and sell T-shirts to tourists with the text “It's great to be alive in Colma!” No wonder black humor is popular in such a place!

The cost of burial in Colma depends on the expectations of the customer and his financial success during his lifetime. A modest urn with cremated remains will cost $ 4,500, a grave - about $ 10,000. 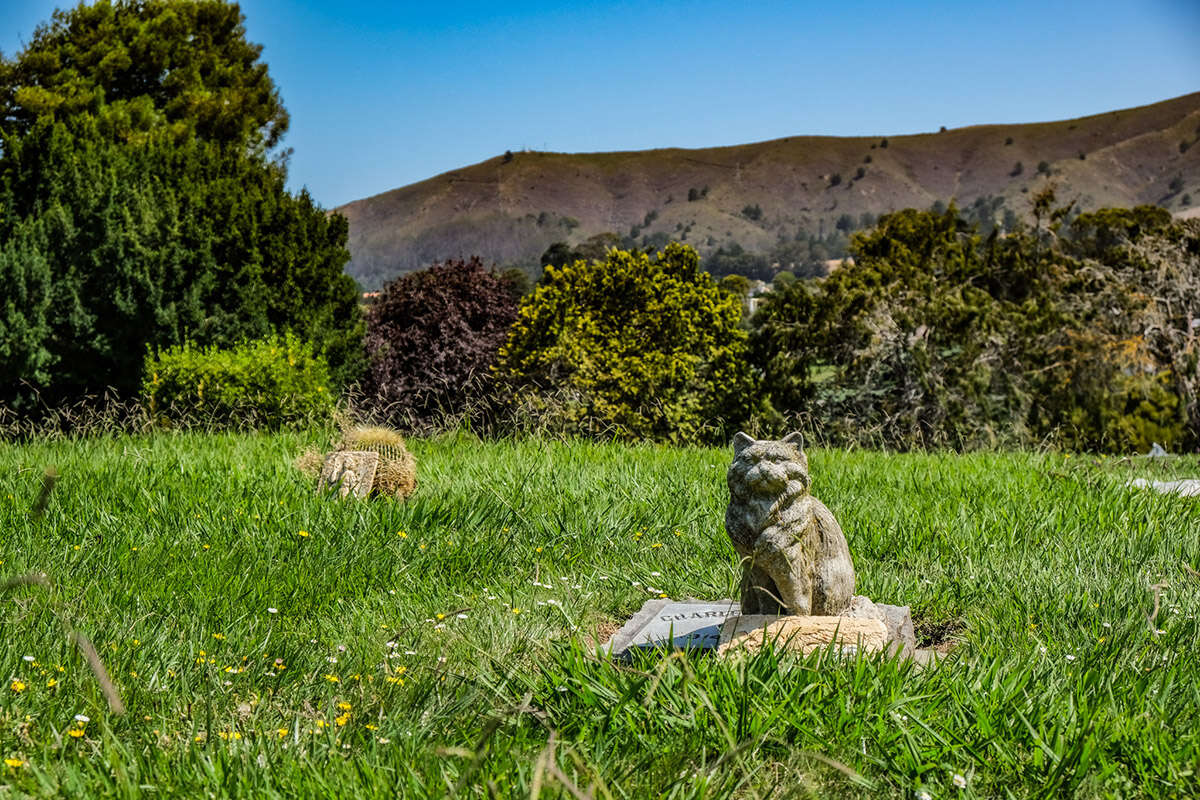 If a family is ready to pay for an individual mausoleum, it will cost from $ 14,000. 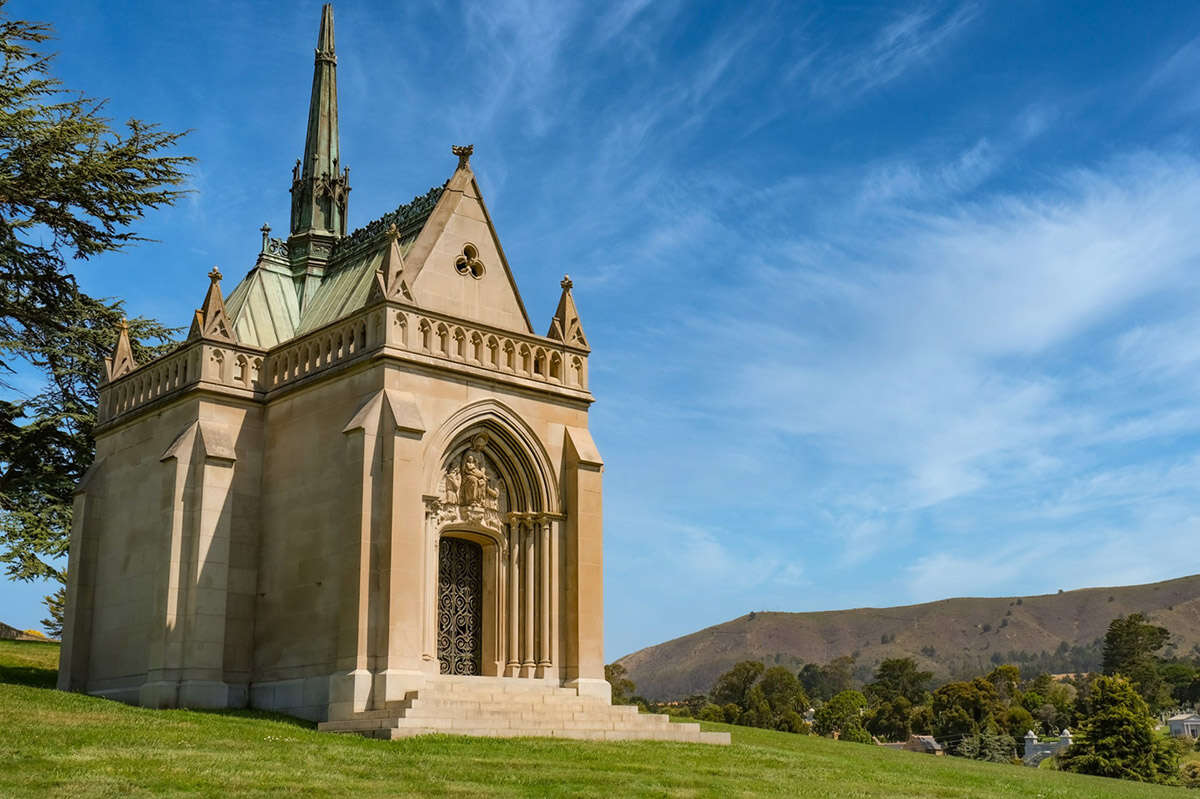 Apparently, prices for the resting place of the ashes are rising in the same way as real estate prices in the region. According to the managers' calculations, the capacity of Colma allows making plans for the sale of land plots for 15-20 years in advance. Before the advent of Silicon Valley, when the land was inhabited by farmers, Colma used to sell plots of land to car dealerships. Now, of course, no one would dream of making such a bad deal. On one acre of land, it is possible to place about one and a half thousand burials, which means that local residents can be provided with jobs. 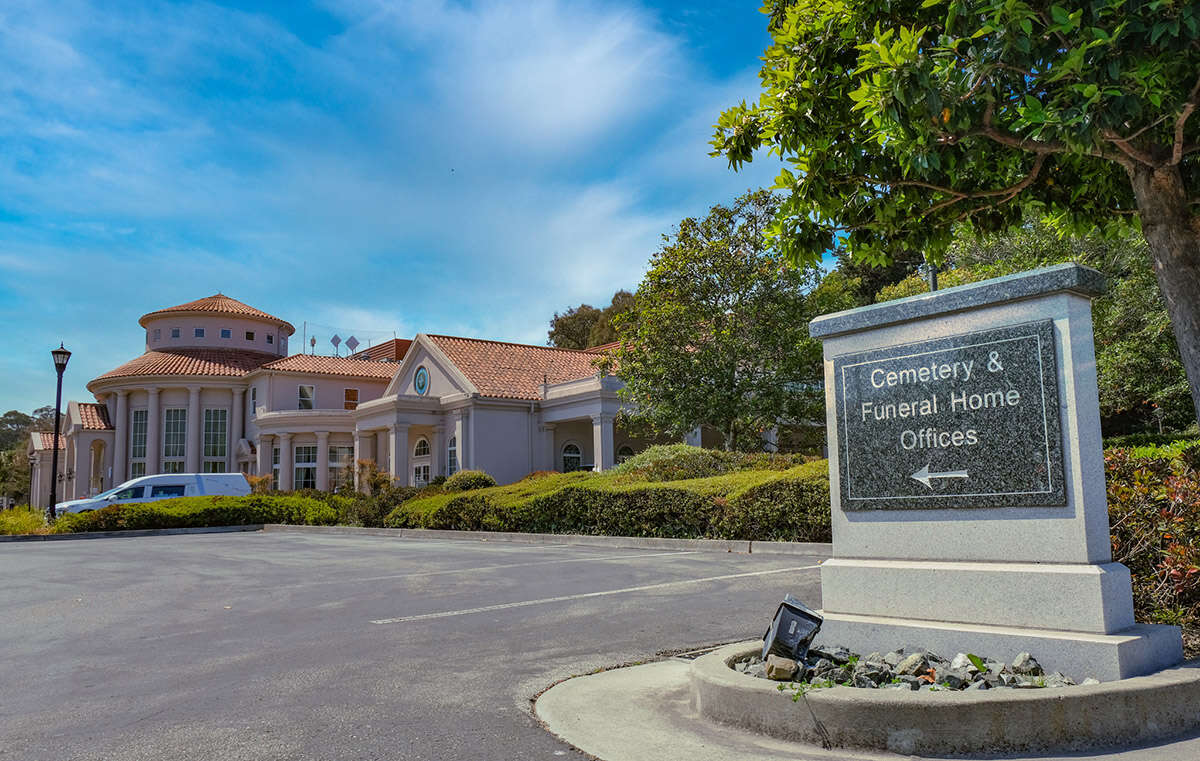 The high prices for a decent afterlife for the dead people scare off many of the living ones. Therefore, the main trend is cremation. It is more popular than ever: half of all the dead-end their earthly journey in an urn. Funeral workers predict this trend will only intensify over the next two decades.

The remains of many prominent residents of Northern California lie in these places. For example, the mausoleum of the jeans industry pioneer Levi Strauss is located in the House of Peace Cemetery, next to Hills of Eternity. Jenny Roosevelt Poole, Theodore Roosevelt's niece, is buried in another cemetery. Nearby is the grave of the infamous media tycoon William Hearst, we wrote about him in the article "Hearst Castle: Contradictions and Secrets of the Billionaire's Estate".

Colma keeps up with the times and constantly modernizes the service. One of the unusual services, but nevertheless extremely popular, is multi-story burials inside buildings with constantly operating air conditioning 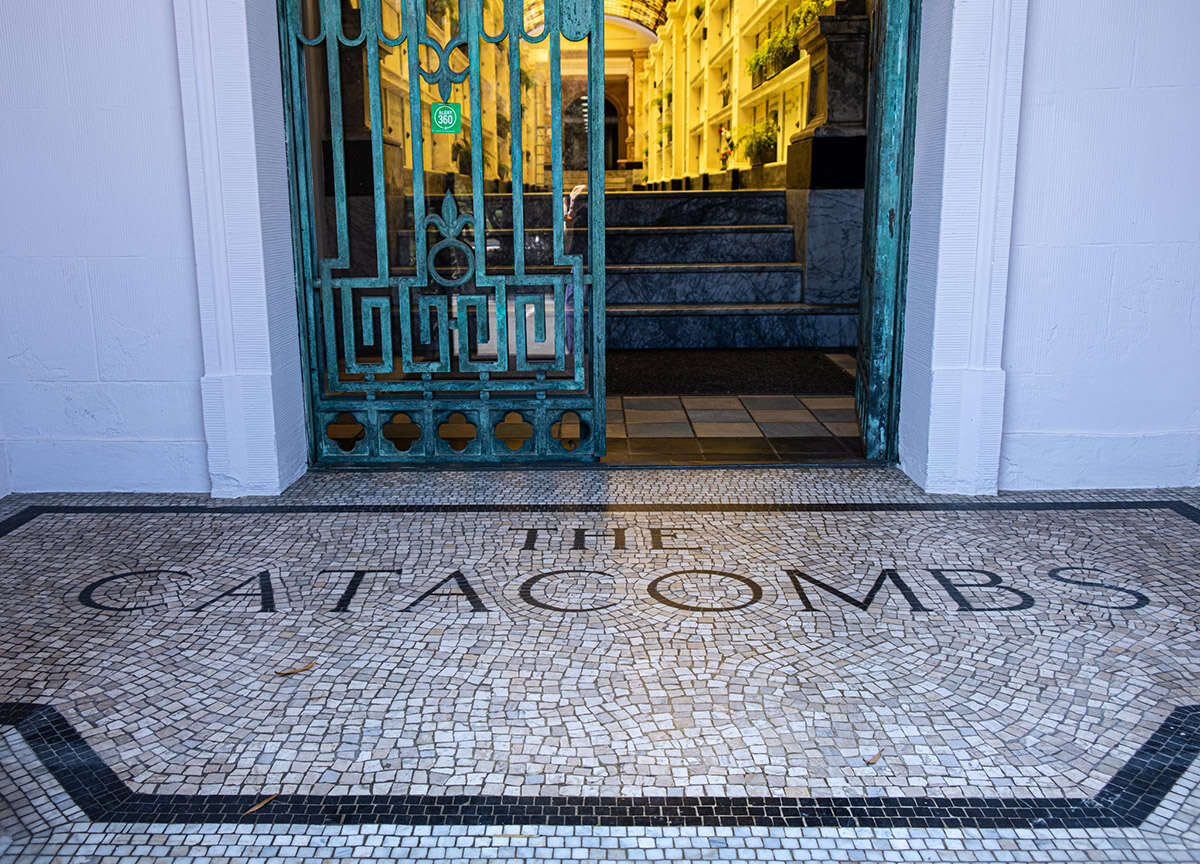 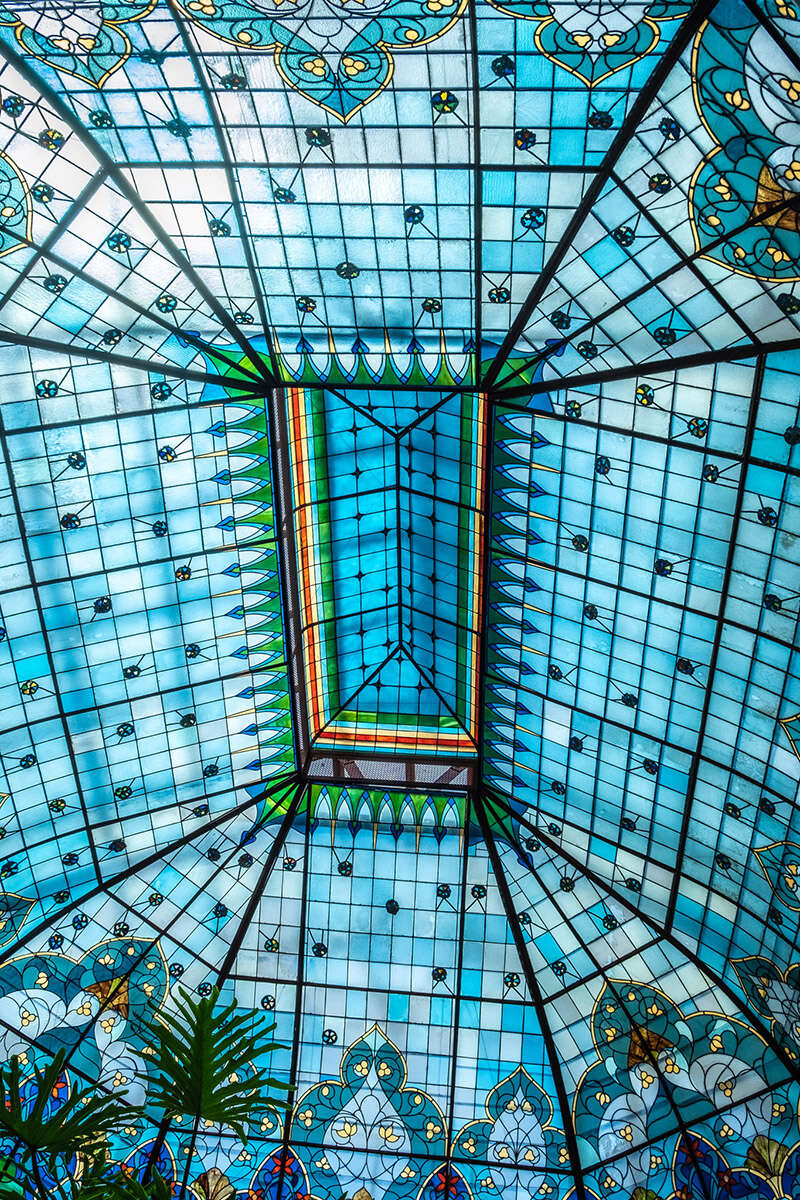 The entrance to this quarters is free: anyone can walk in a cool place, looking at the most diverse types of burials. Some of the walls and arches are decorated with mosaics or paintings worthy of a museum. 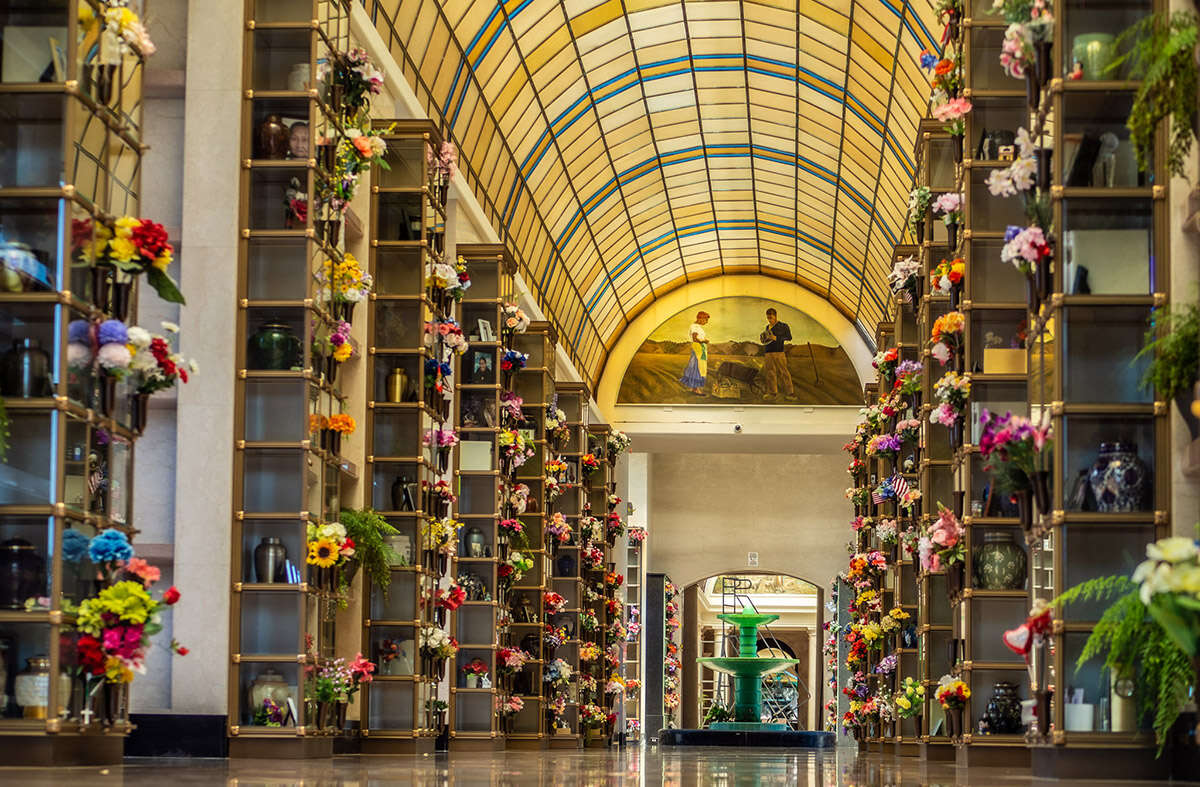 The multi-level shelves are divided into many cells of the same type with a plastic door. Each contains an urn the ashes of the deceased, often photographs and souvenirs. Urns in the form of a book are also used. 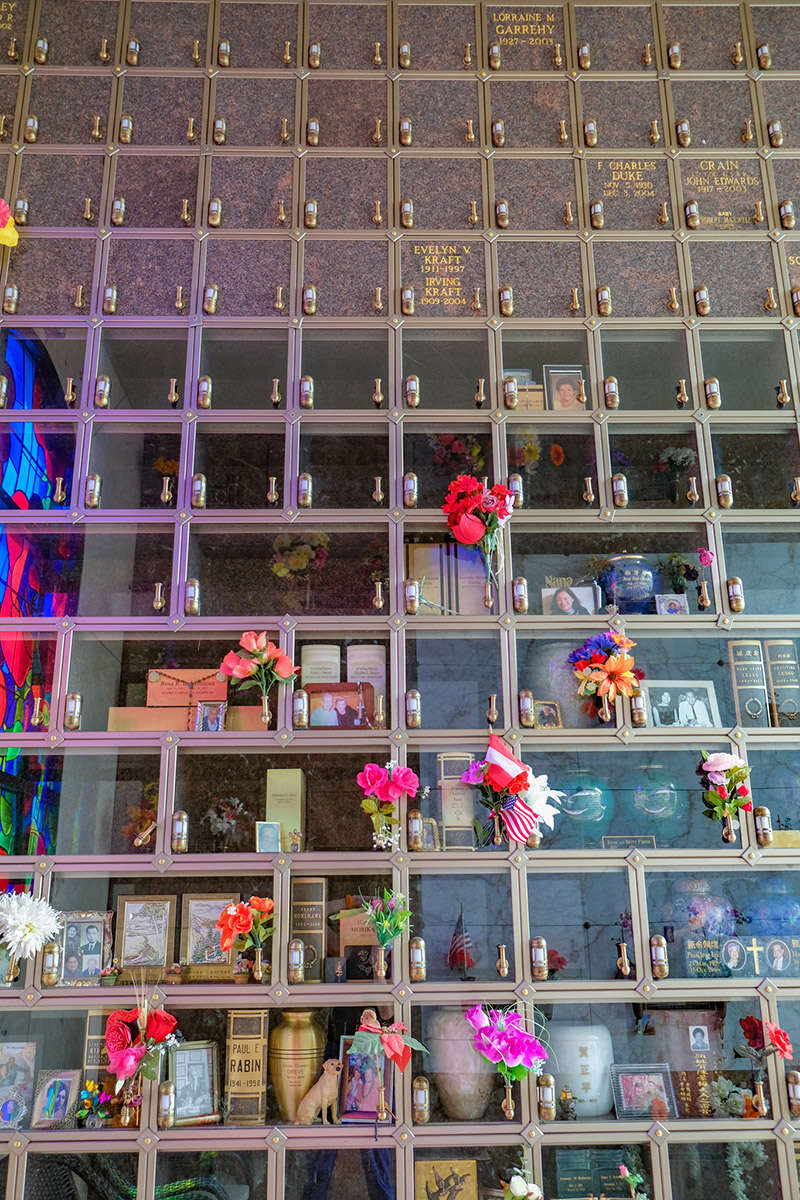 In the photo below, you can see the Apple IT corporation patch. Apparently, work took a very significant part of the deceased's life. 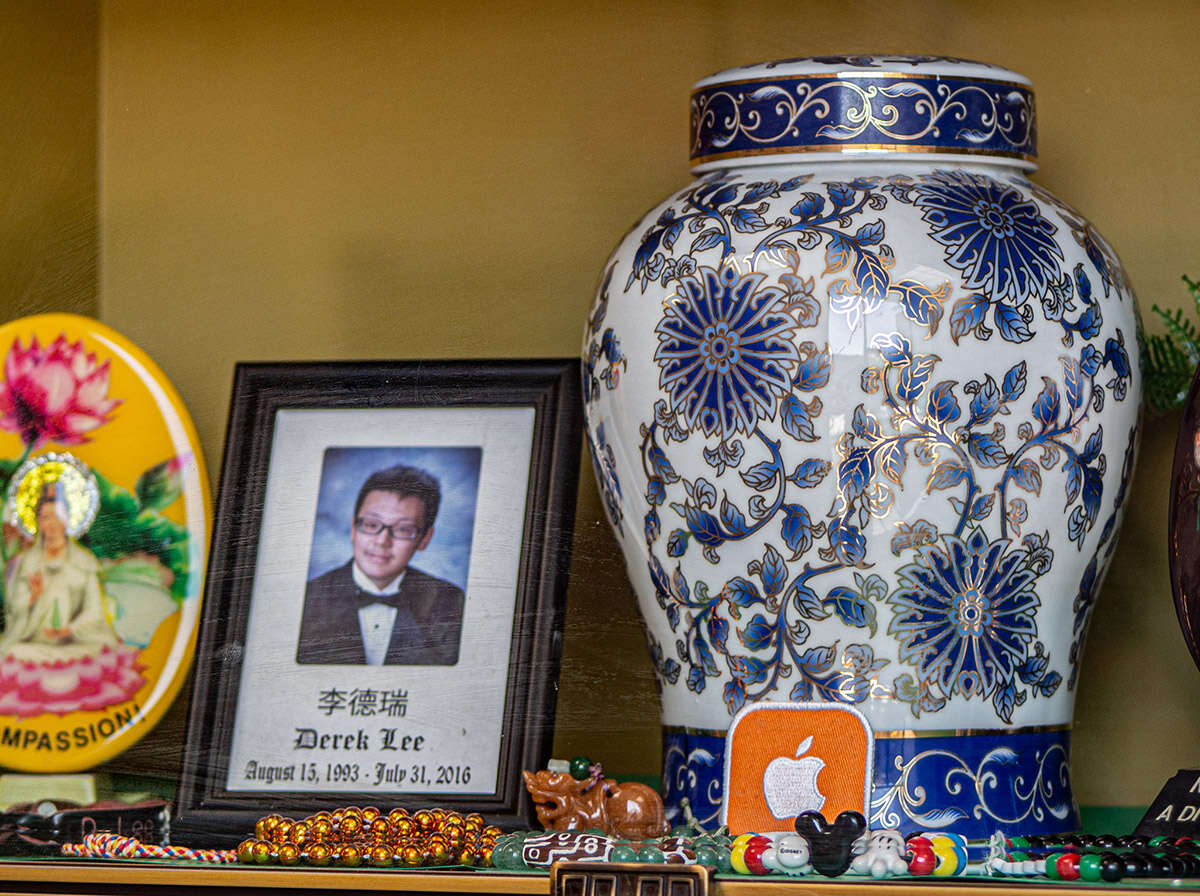 On memorable days and holidays, relatives and friends of the deceased visit burial places, decorating a small narrow shelf to their liking. 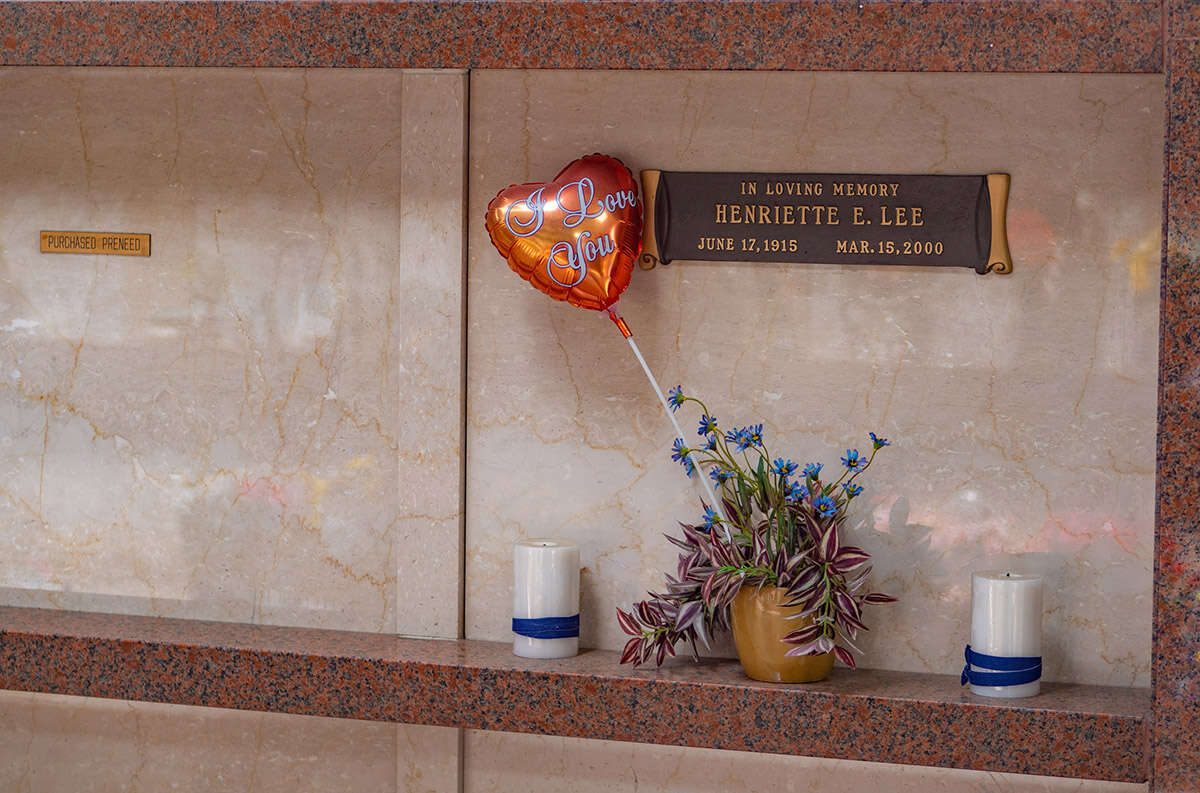 Some families buy out entire plots and arrange them according to their national religion and traditions. Expensive materials can be used for decoration. 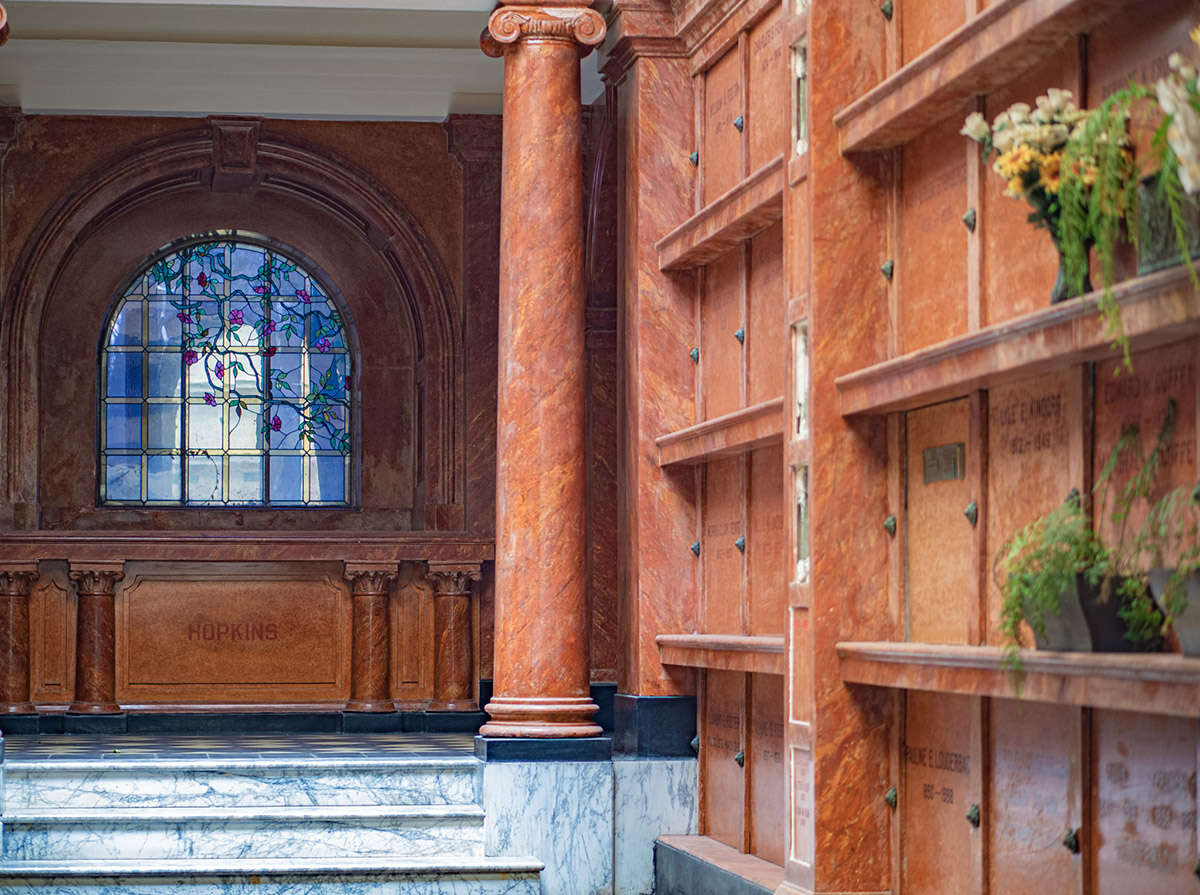 On this grave, the family placed many family photographs and also told about the successful business of the deceased. 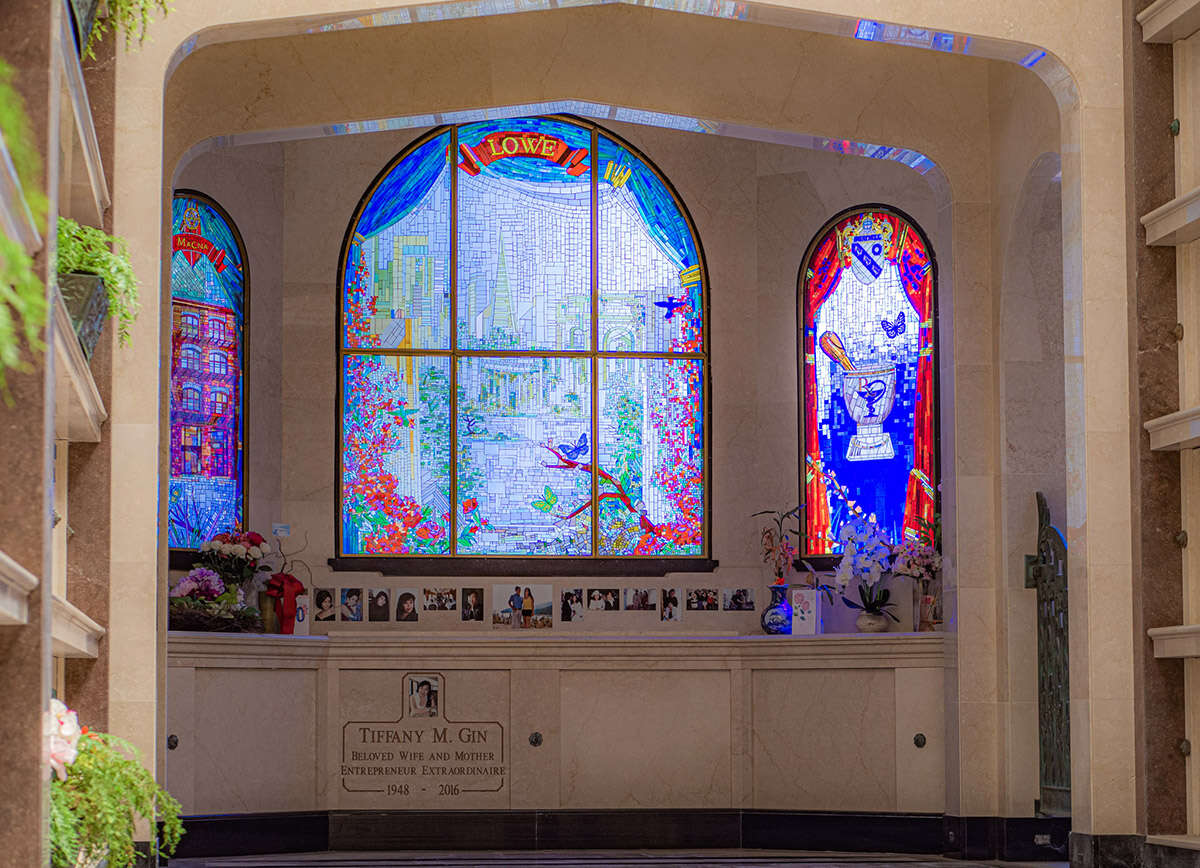 Stained glass windows are custom-made, one of them depicts an office building: the deceased made a fortune on real estate. Another splendid stained glass window depicts the family's coat of arms, a stupa, and a bowl with a snake - traditional symbols of medicine. 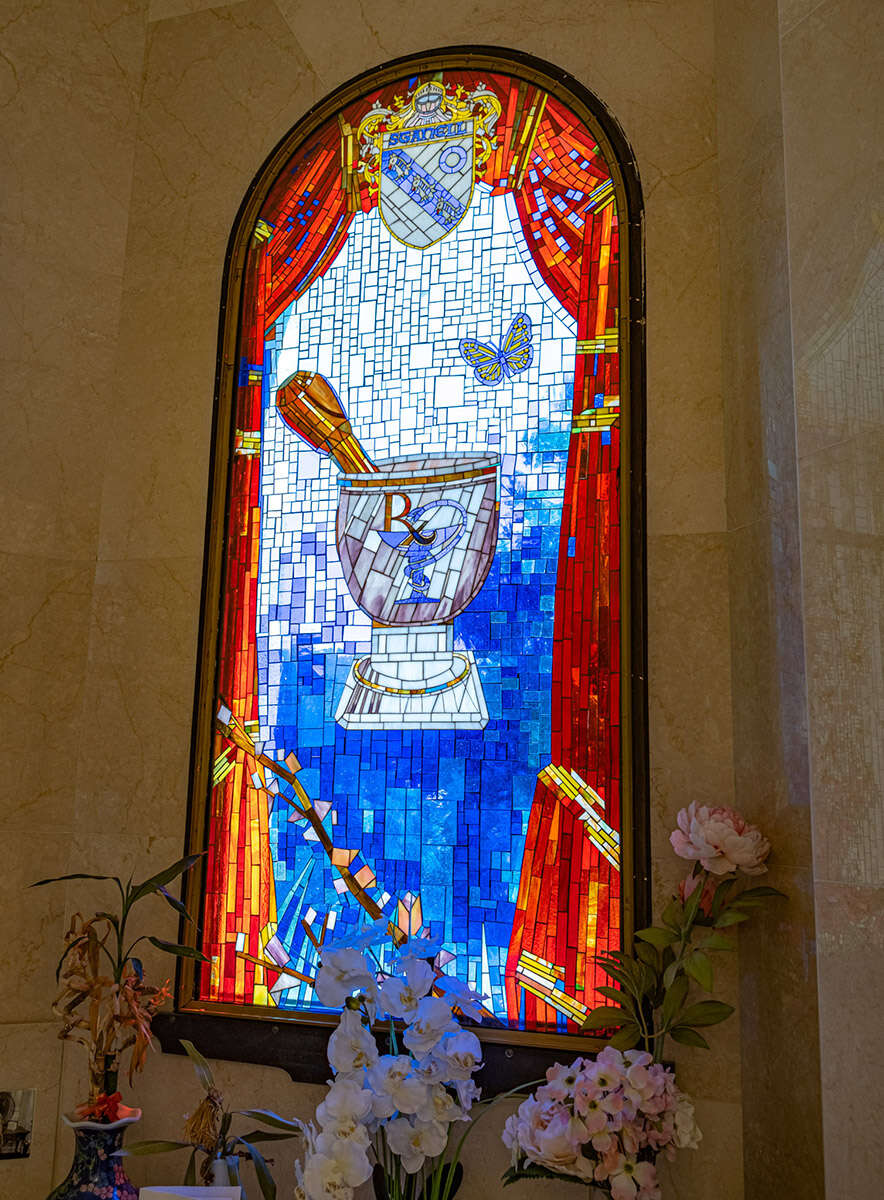 Colma Cremation and Funeral Services accept orders online to send bouquets, so anyone can send flowers on their own behalf or even plant a tree.

In each building, everything is arranged so that when visiting, relatives feel comfortable and can focus on their feelings and memories. 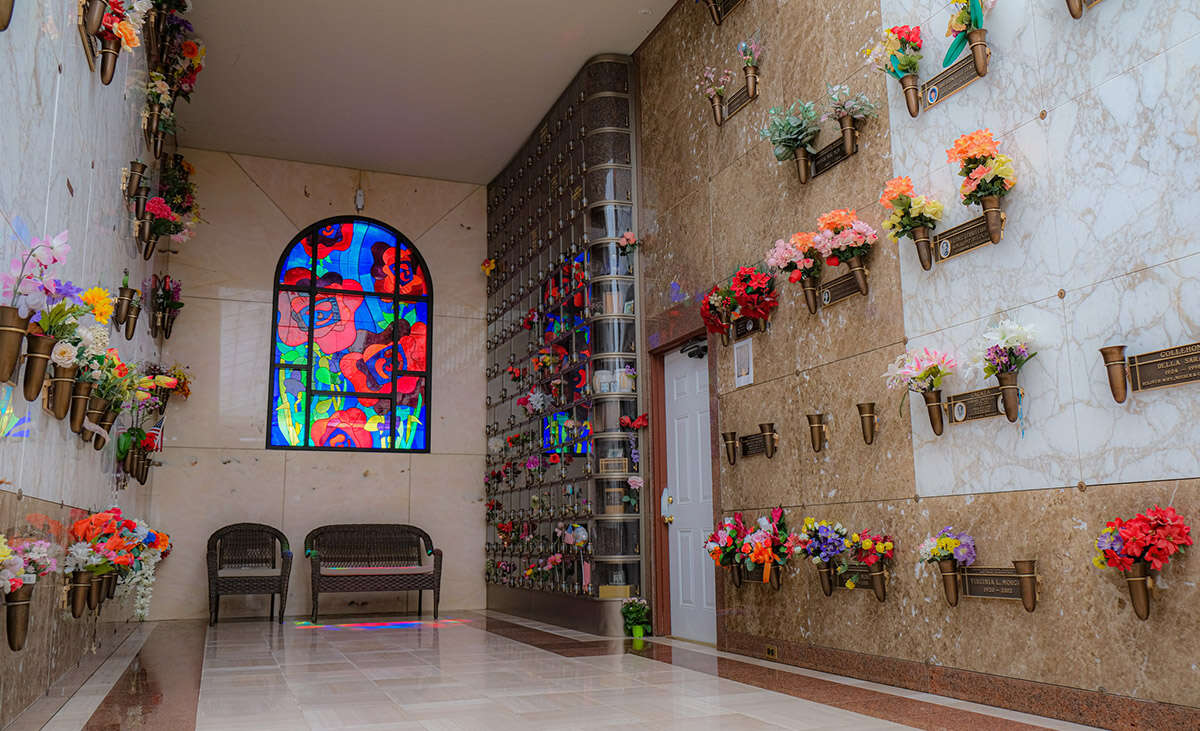 Some corridors have artificial waterfalls, greenhouses, and fountains. 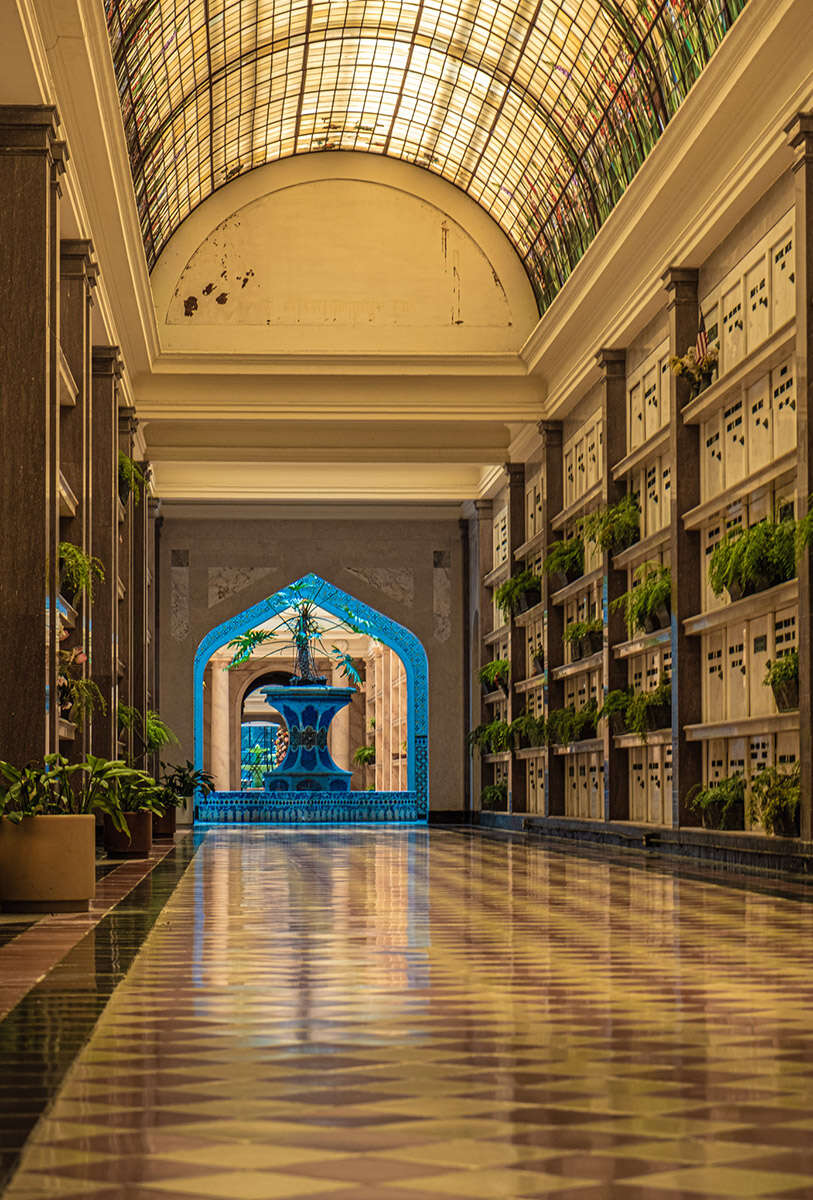 There are also outdoor multi-level burials. They are cheaper; it is believed to be less comfortable due to the weather and lighting. 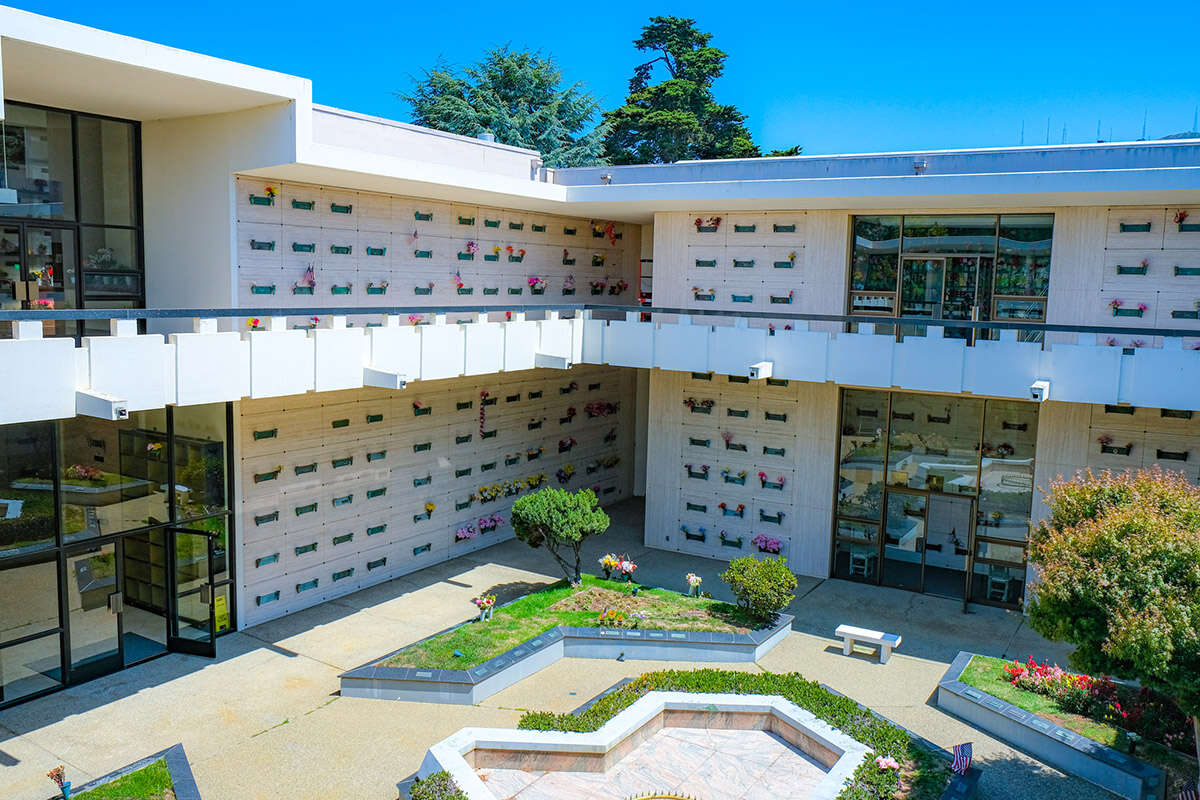 A visit to Colma can take 2-3 hours if you intend to hike in search of celebrity graves. It is a quiet and very peaceful place that educates guests about the culture and history of the Bay Area better than trendy restaurants and clubs.

If you are not yet ready to personally get acquainted with this extraordinary attraction, we suggest watching a three-minute video about Colma, a town with one and a half million inhabitants who have gone to a better place.

Whichever routes you choose while exploring our amazing planet, our Travellizy Team is always ready to help you plan your trip!