Go to the main page
Slovakia: how to get to Paradise for one and a half euros
Travellizy team
Places

Traveling through Slovakia, you can see amazing landscapes of forests, canyons, waterfalls and ice caves. And you can even go straight to Paradise. Slovak Paradise.

In this article, we are telling you about it, as well as about the curious cities of Poprad, Levoča, Roznava, Spisske Podhradie and Spisska Nova Ves. But, one thing at a time.

This is one of the nine national parks in the country. These are 200 square kilometers of paradise for lovers of nature, hiking and cycling. There are several entrances to Slovak Paradise, in the north and in the south of the park. Choose the one that is closer and easier to get to on the map. 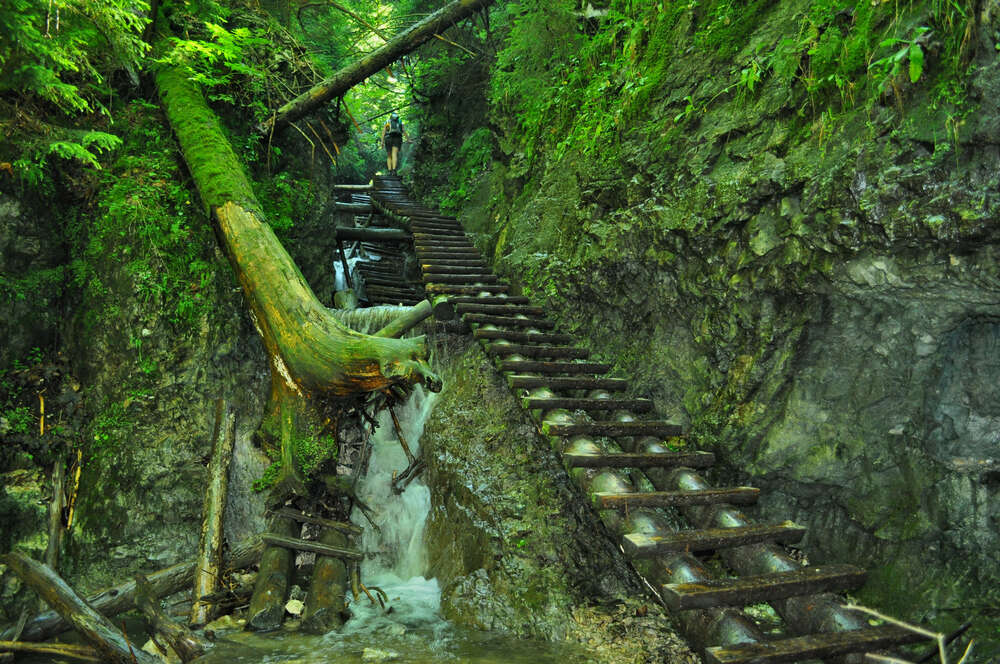 In the vicinity of the National Park, there are small towns and villages with hotels, guest houses and campsites. One of these towns is the cozy and beautiful Spišská Nová Ves. You should stay here for a couple of days to explore the near and far surroundings. 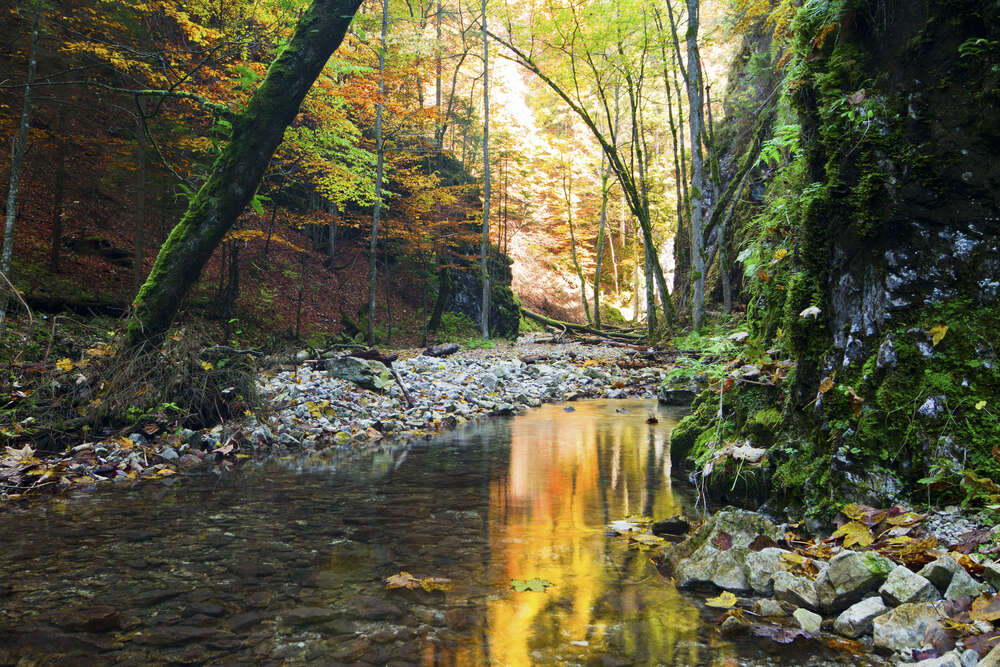 Slovak Paradise is open all year round. Admission is paid: € 1.5 (for children - € 0.5) - per day, € 3.50 - for three days and € 6 - for five days. Particularly difficult sections of the routes - near waterfalls, gorges, canyons - are equipped with railings, steps, stairs, bridges. 300 km of pedestrian and 110 km of bicycle tourist roads are numbered and marked in different colors, depending on the complexity of the route. Choose based on your physical abilities: from a half-hour crossing to a seven-hour crossing. The main thing is to put on comfortable shoes, take water (not in all sources of the park, it is suitable for drinking) and warm clothes, if you plan to go into the cave. 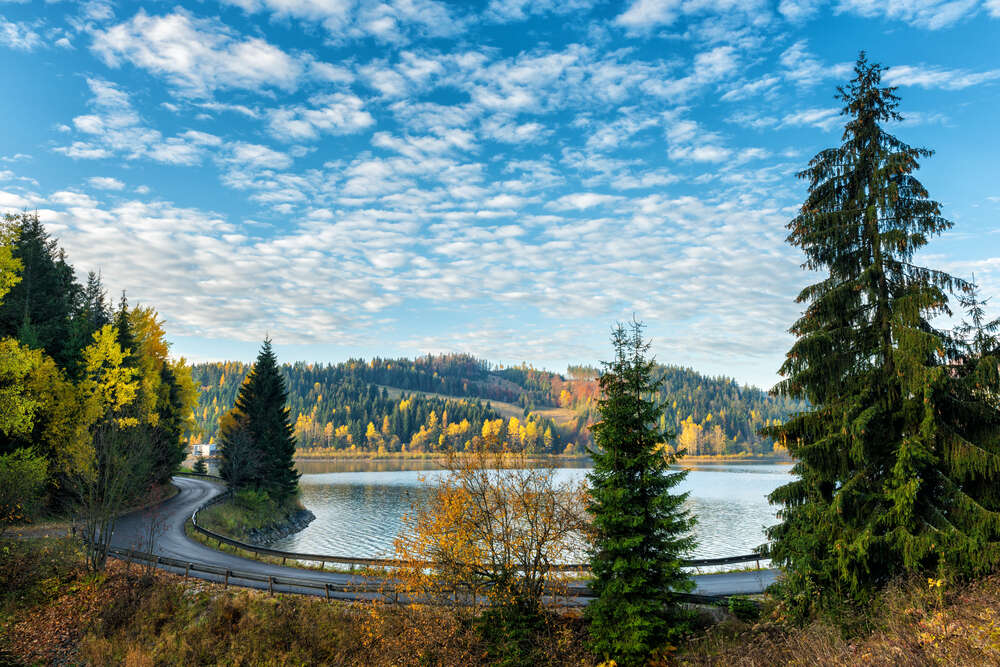 Dobšinska Ice Cave, the largest ice cave in Slovakia, is 110 thousand cubic meters of ice. It was discovered at the end of the 19th century. After 17 years, it was the first in the world to be electrified. And in 2000, it was inscribed on the UNESCO World Heritage List. You can get inside from May to October. 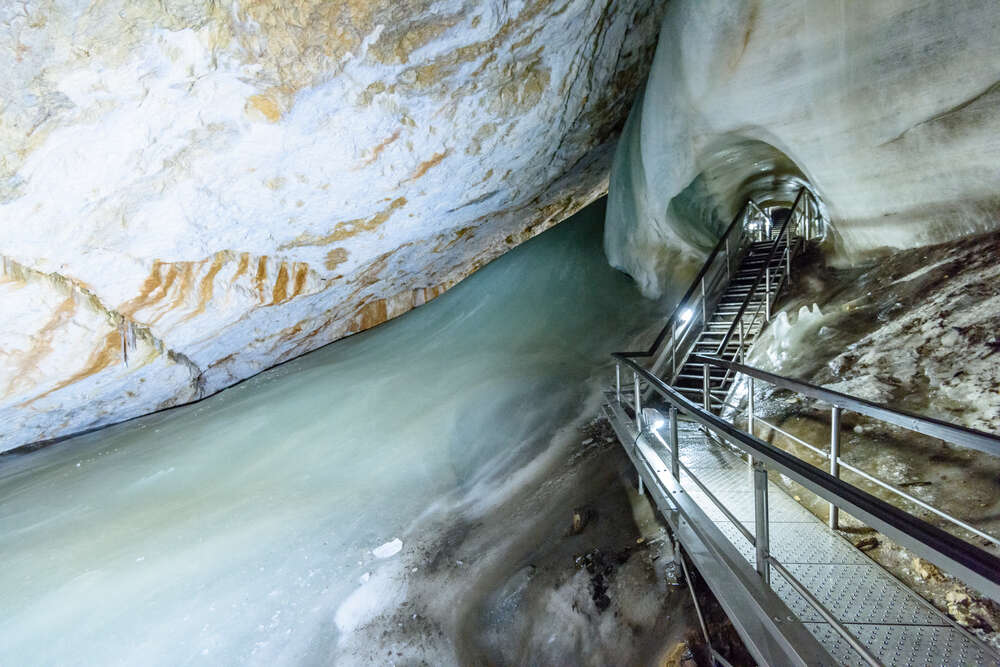 Names and descriptions of trails, mileage, and estimated travel times are indicated on special diagram, which is installed inside. Some routes are available only with guides. You can go hiking or horseback riding for many days. For travelers with dogs, there are warnings, where you can’t go. You can swim only in the reservoir of Palcmanska Masa, where the water is clean but cold. The infrastructure is also developed for winter outdoor activities in the park. 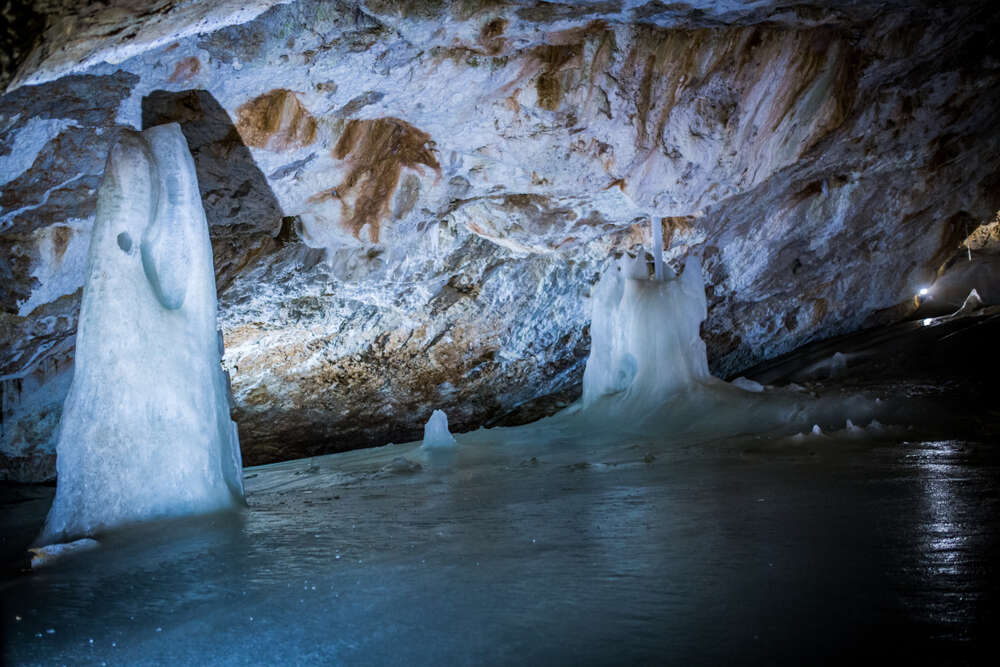 Many viewpoints located on the cliffs (routes laid there) offer very beautiful views of the Slovak Paradise, as well as High and Low Tatras.

But there are places in the national park that are inaccessible to tourists, the so-called silence zones, which are created to preserve endangered plant species. 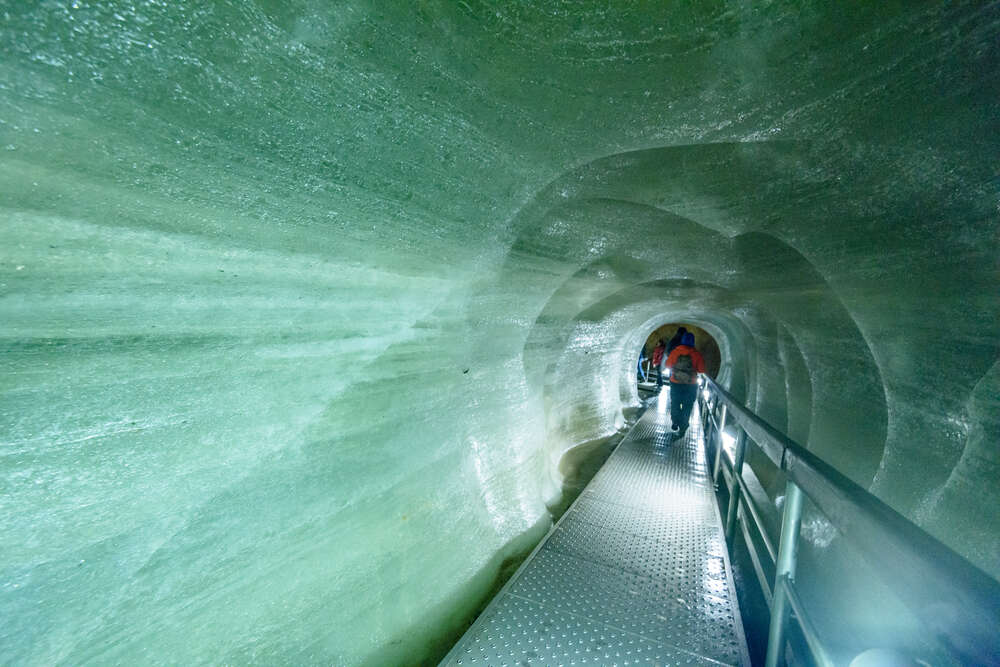 If you want to stay in Paradise longer, but still do not know which city you will go from or where you decide to spend the night – plan routes and overnight stays in advance.

IMPORTANT: When planning to walk through the gorges, remember that you can only move up and against the course of the rivers.

Spisske Podhradie in Slovakia and its castle 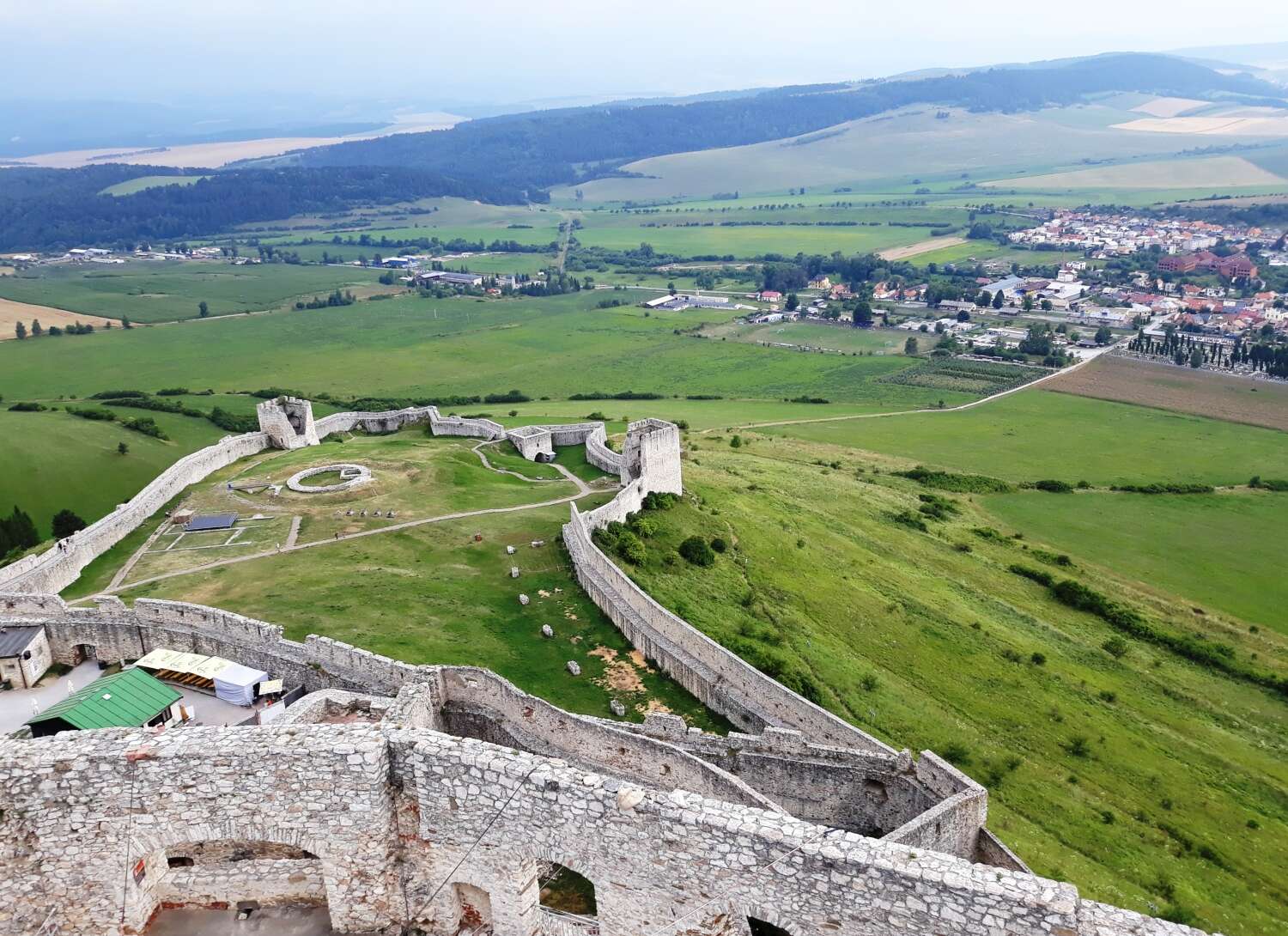 This small town can be reached from Spisska Nova Ves, Poprad, Levic. We are going to visit Spiš Castle, the largest castle complex in Central Europe, included in the UNESCO World Heritage List. The fortress stands on a mountain and is visible from everywhere, but, leaving Podhradie, you need to find the sign or ask the locals where to start the climb, otherwise you will have to go through the field. 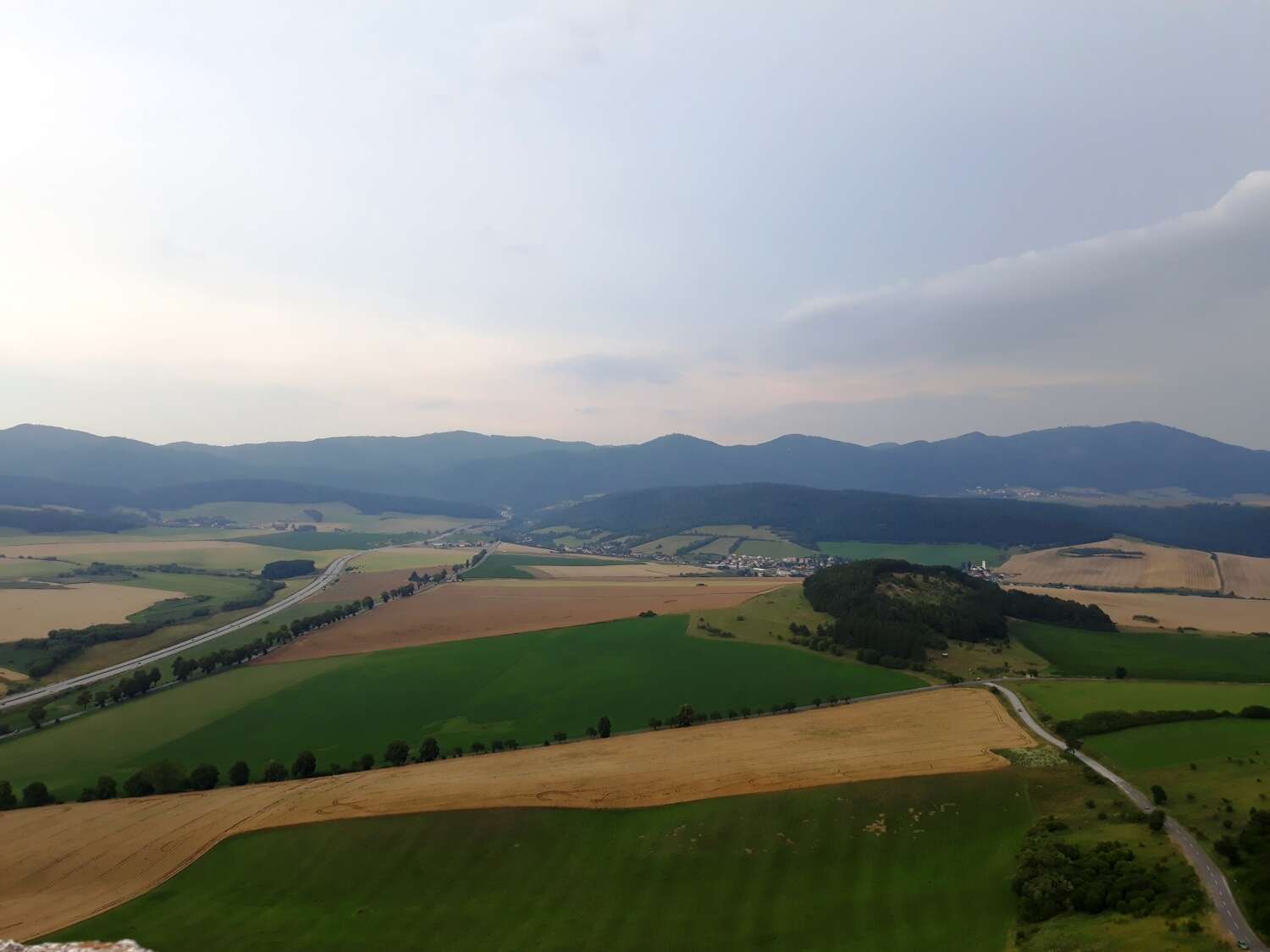 How fast you take the fortress is up to you. Someone will climb up in 15 minutes, someone will crawl in 40. If you are traveling in a rented car, there is a parking lot near the castle, which you can reach through the village of Hodkowice. From the parking lot to the fortress, it's 5 minutes walk.

Here is the opening hours of Spissky Grad and ticket prices. In winter, it is closed. 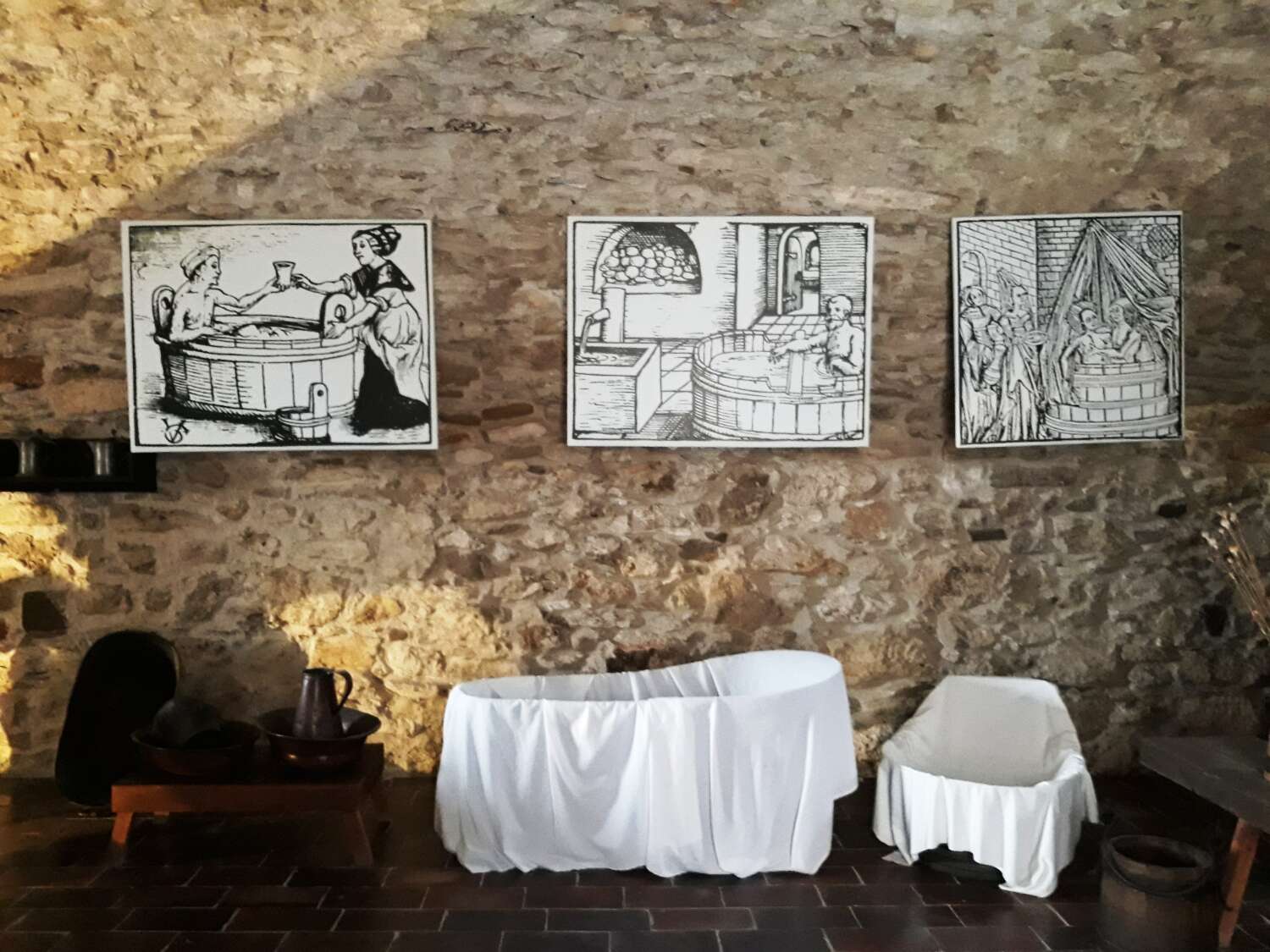 The history of the castle began at the turn of the XII century. For centuries, people fought for it, it was given as a gift, sacrificed, rebuilt, it was on fire, lay in ruins, was restored. Reconstruction is still underway here. The castle complex occupies 4 hectares, and there is something to see here. From recreated kitchen and bathroom interiors to a collection of weapons and a torture chamber. Some tourists try on the inquisition chair for some reason.

To see all the beauty of the surroundings, climb the fortress tower. Endless fields lined with roads, lonely villages with towering church spiers and an impending storm... 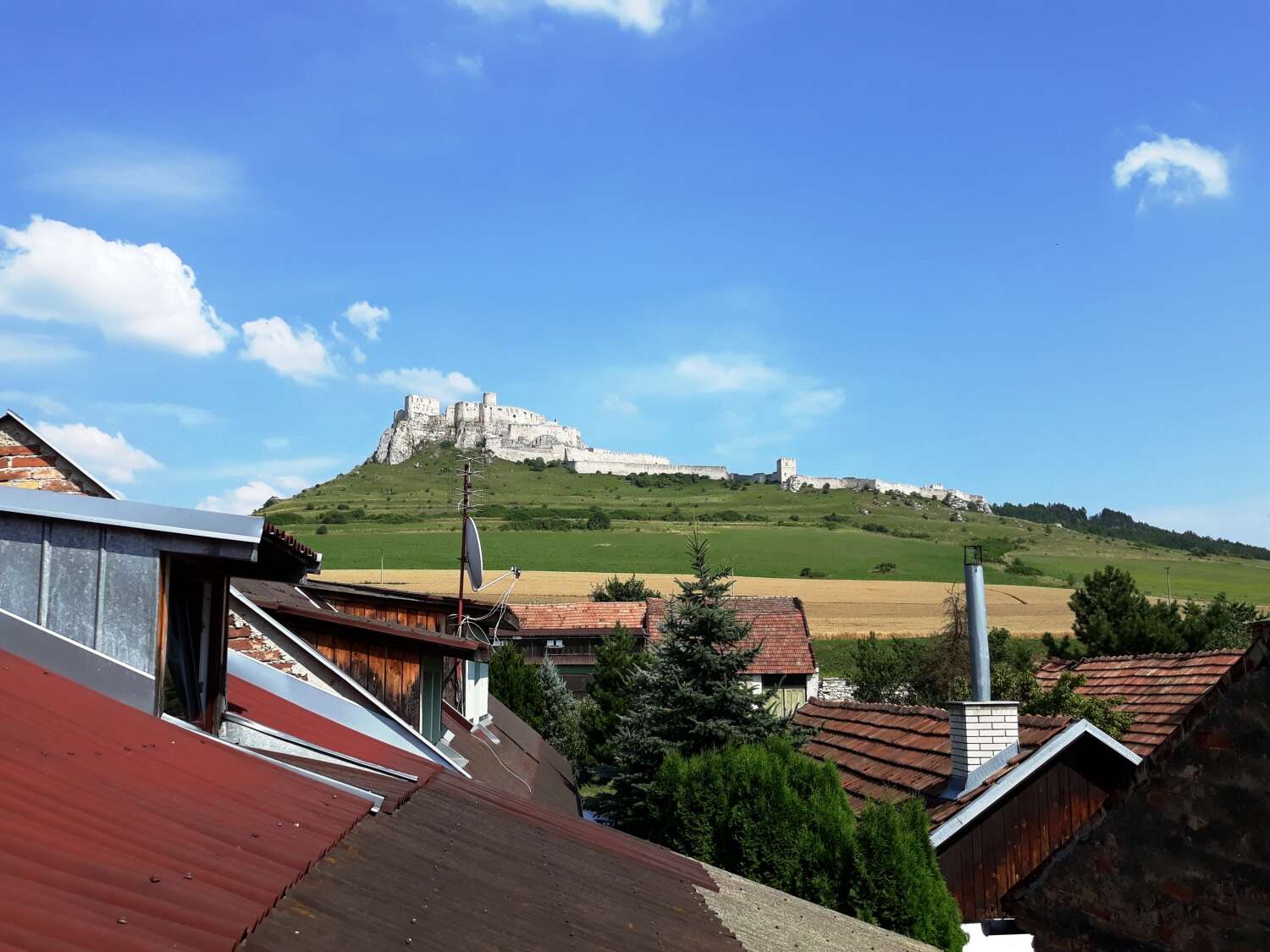 Staying for the night in Spišské Podhradie, choose a hotel with a view of the castle. In the evening, lighting turns on inside, and it is all in the lights until midnight. It's full immersion in romance and mystery.

The city of Levoča in Slovakia

This city, located at the foot of the mountains, has been known since the XXIII century, and all the most interesting is in its old part. Through the gate, we get behind the medieval city walls. Everything inside is a single cultural and historical complex, included in the UNESCO List of World Heritage Sites. 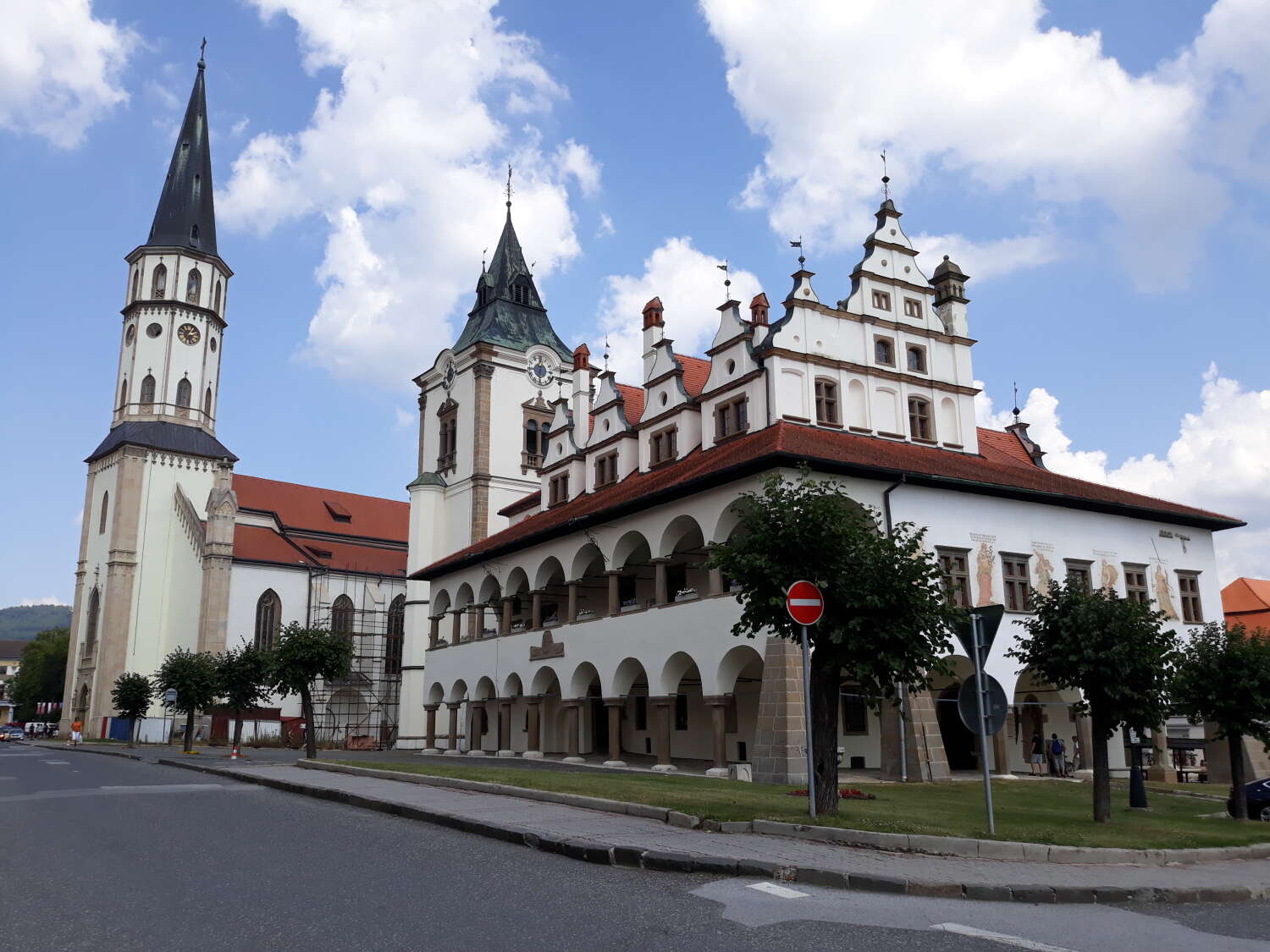 In the center of the old square, there is the Roman Catholic Church of St. Jacob, built in the 14th century. There are 14 Gothic and Renaissance altars in it, including the largest late Gothic wooden altar in the world, which is more than 18 meters high and more than 6 meters wide. 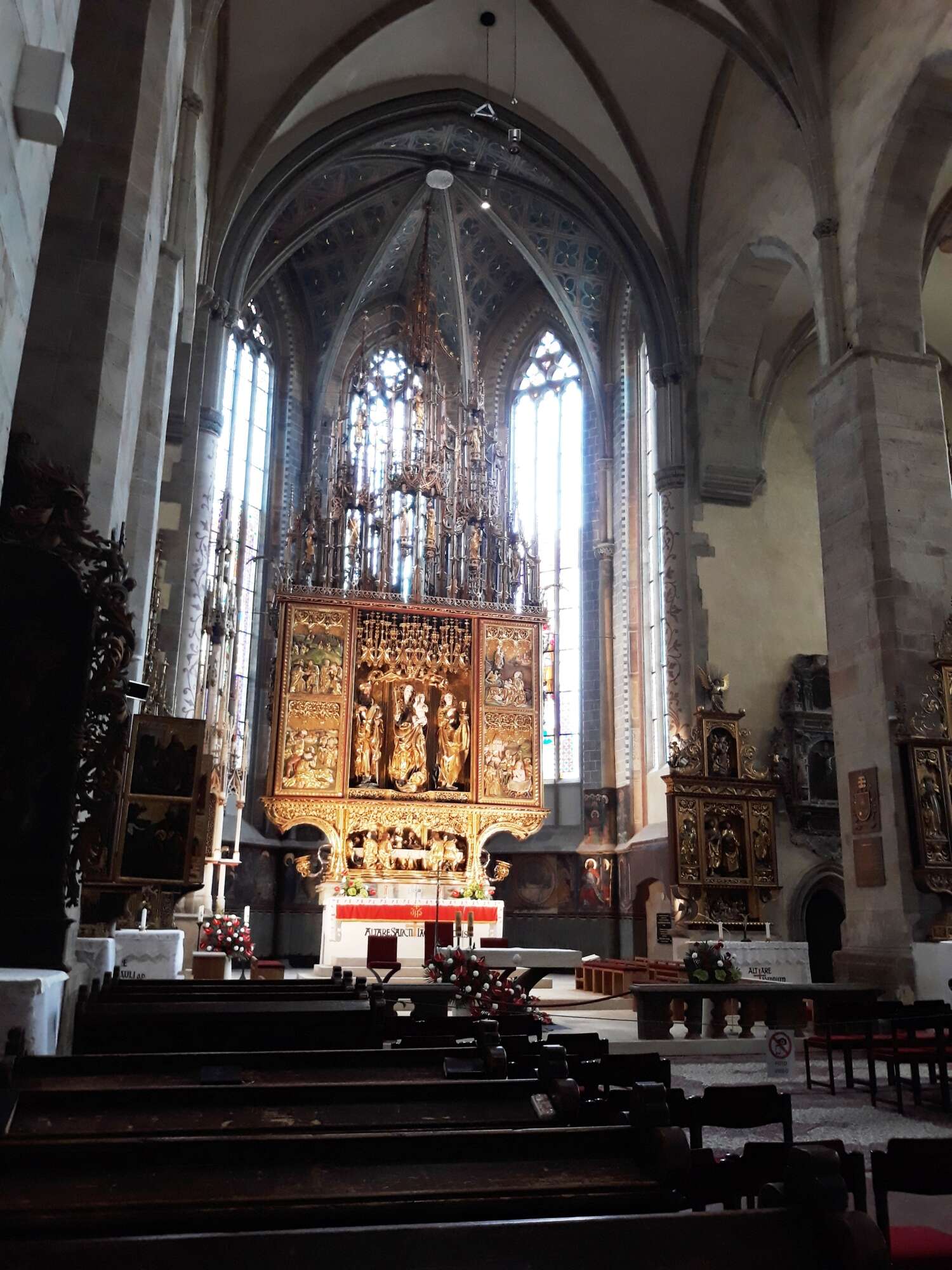 The architect who created this masterpiece from linden without a single metal nail was called Pavel from Levoča. Entrance to the church is paid, it is € 3 with a guided tour. At the end, you can climb to the bell tower for free, from which you can see the Marianska Hora and the Church of the Apparition of the Virgin Mary, a pilgrimage place in Slovakia. On the same square, there is a cell of shame, where people were put for public punishment. 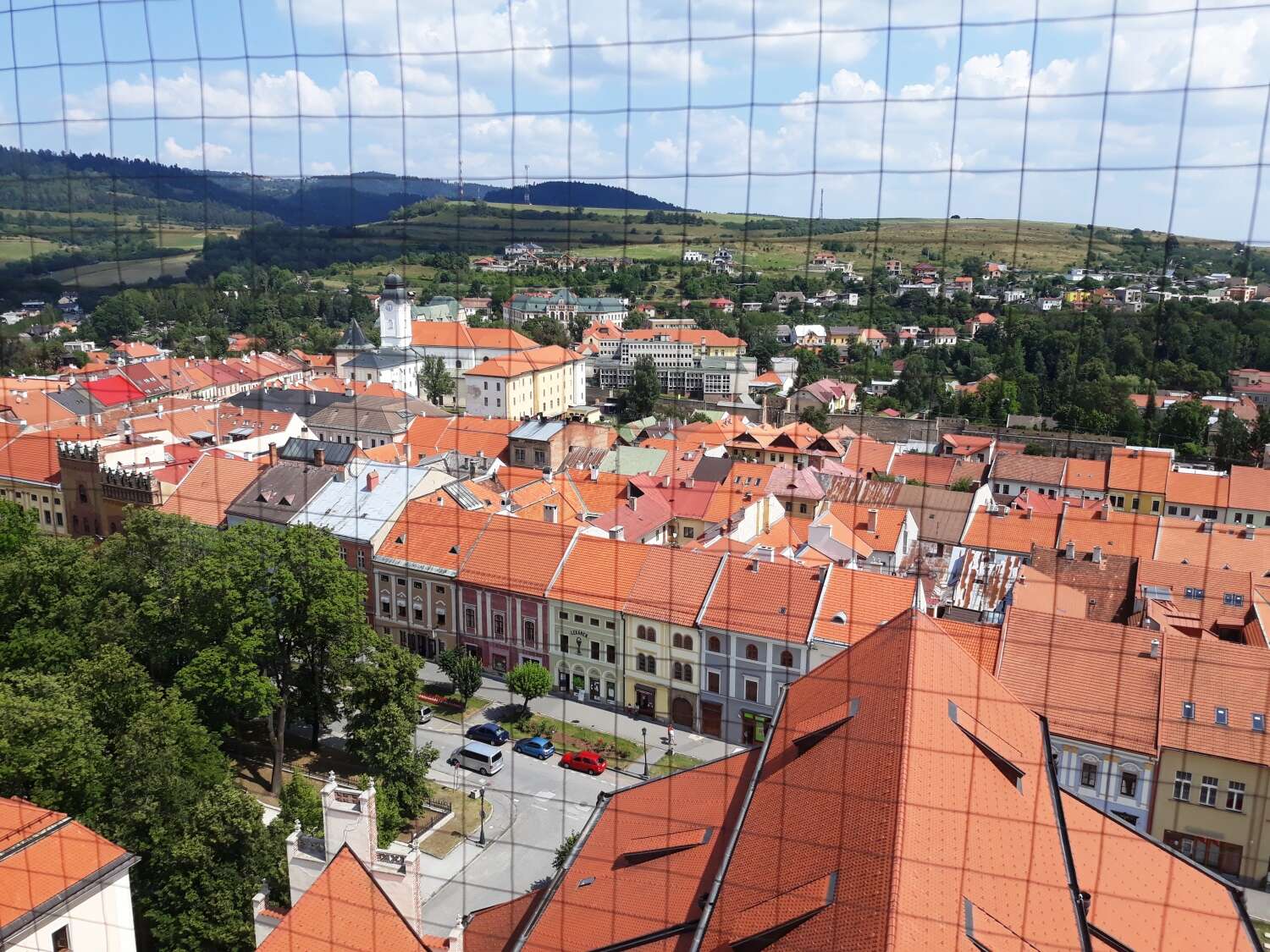 In Levoča, there are many beautiful houses. And their doors are one more historical than the other.

Another option after visiting Kosice and its environs is to go to Poprad. Distance between cities is 117 km. Travel time by train takes about an hour and a half. One way ticket costs € 5.30. You can take a bus. The railway and bus station in Poprad are nearby. It takes about 15 minutes to the old center on foot. The river of the same name flows through the city. And the town itself includes five nearby villages, which you can reach on foot and plunge into antiquity. 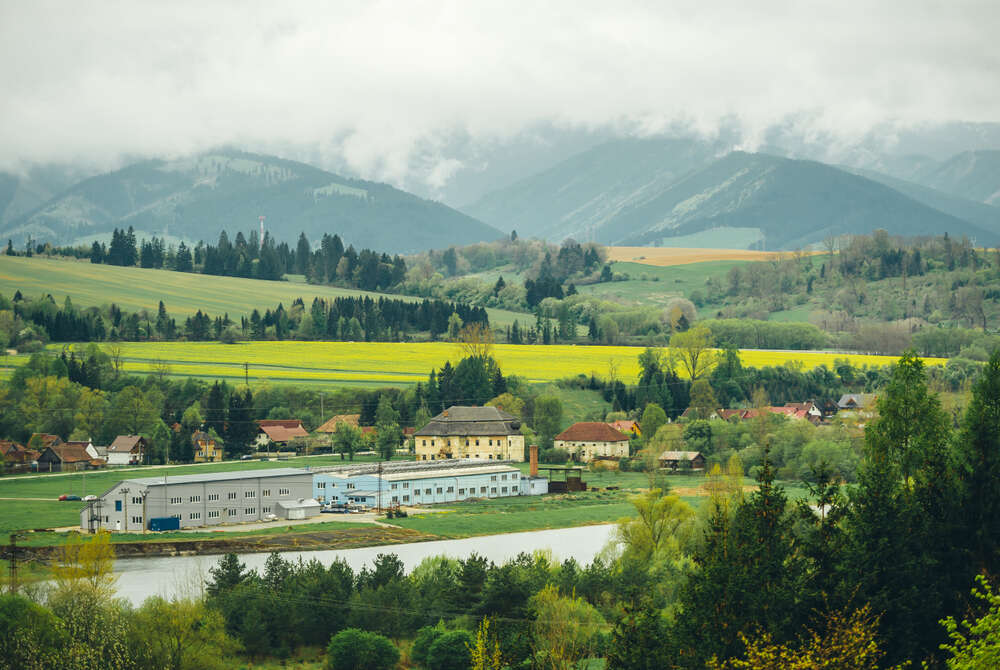 Sitting in cozy cafes, going to a local history museum, watching ancient frescoes in a church, visiting branded shops, attending an evening concert in the open air - all this can be done on St. Aegidius Street, the main street of old Poprad. As in Kosice, it looks like a spindle from above. In the widest part, in the square of St. Aegidius, the Cathedral of this Saint has been standing since the XIIIth century. There are the Renaissance bell tower and the Evangelical Church of the Holy Trinity next to it. The Tatra Gallery, which displays about two and a half thousand works of art, is housed in the restored building of a steam power station. 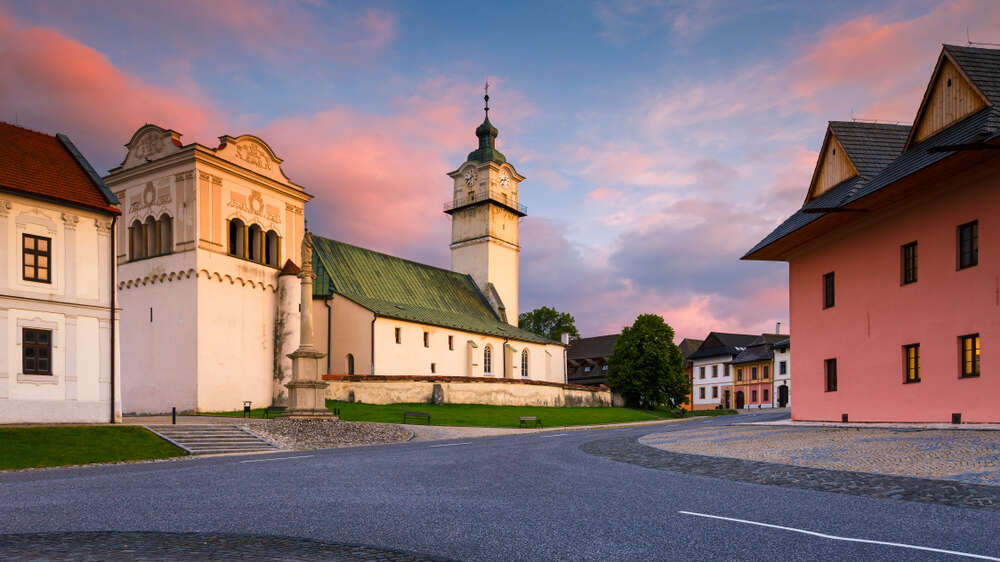 There is also a large water park in Poprad: 13 pools and 350 water attractions. Mineral-containing water comes from an underground source. One of the pleasures in winter is skiing on a frosty day, and then swimming in +30-degree mineral water! 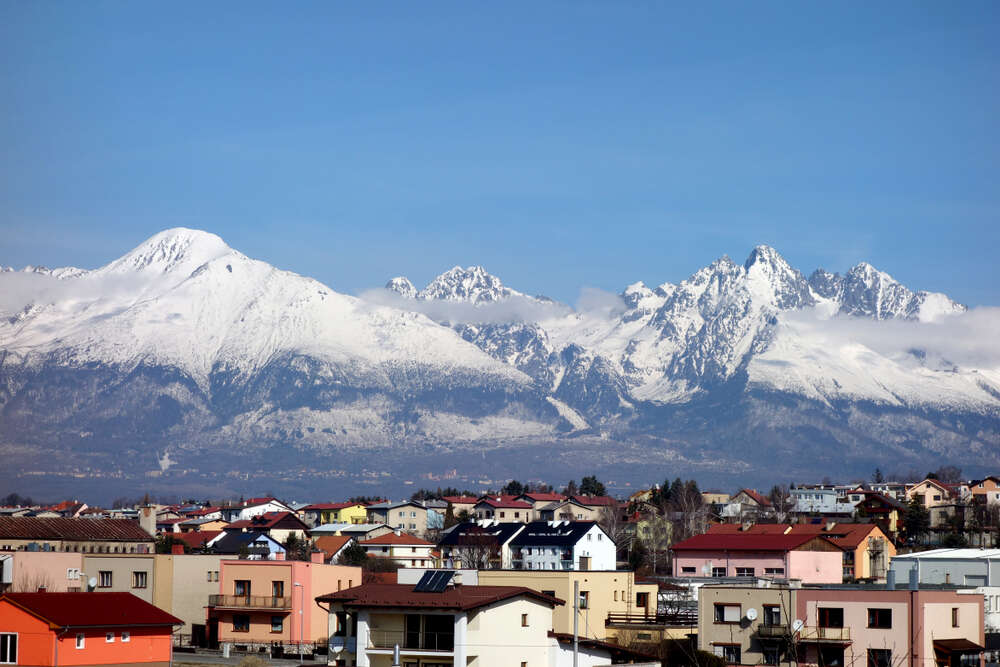 The city has a very good location, as High Tatras and several national parks are only a couple of tens of kilometers away. It is connected with other cities and countries by the railway, the international highway and the airport. Poprad is called the Gateway to the High Tatras. And you can get there by Tatra train. 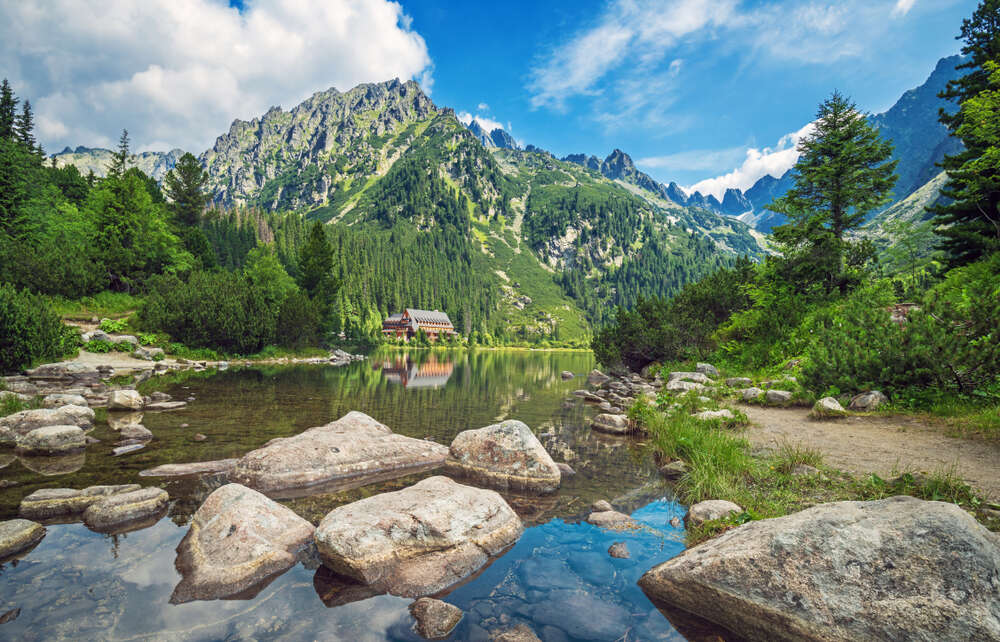 On average, distances between cities and villages are 1-2 kilometers. A one-way trip costs € 2. But if you decide to explore several places in the High Tatras, it is better to buy a ticket for a day or three. Tickets need to be composted in the carriage.

Comfortable sports shoes, windbreaker and water are a must-have. 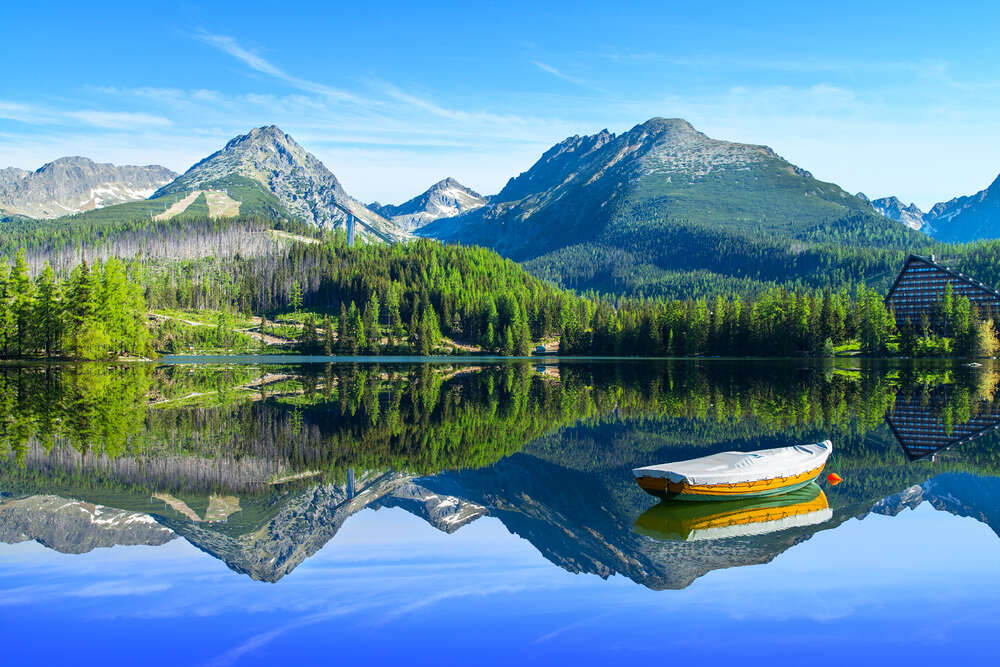 Slovakia is striking in its beauty. You need to go here in order to enjoy its nature and architecture during leisurely walks, admire the decoration of numerous churches, and, of course, gain new knowledge in museums that carefully preserve centuries-old history.

Lithuania: the best places for family holidays with children

24 hours in the Cinque Terre: what to see and how to get to the National Park of Italy