From Holland to France on the Coast Tram. Unusual trip around Flanders

Picturesque landscapes, wide sandy beaches and grassy dunes. Lively small towns and cozy little villages. Old-fashioned aristocratic villas and modern high-rise homes. And, of course, the endless sea. All this beauty can be seen and captured by tram along the Belgian coast of the North Sea from Holland to France.

Travellizy collected information on an unusual route for traveling around Flanders.

The Coast Tram / Kusttram is the longest tramway in the world. The first section between Ostend (Ostende) and Newport (Nieuwpoort) was commissioned in 1885. 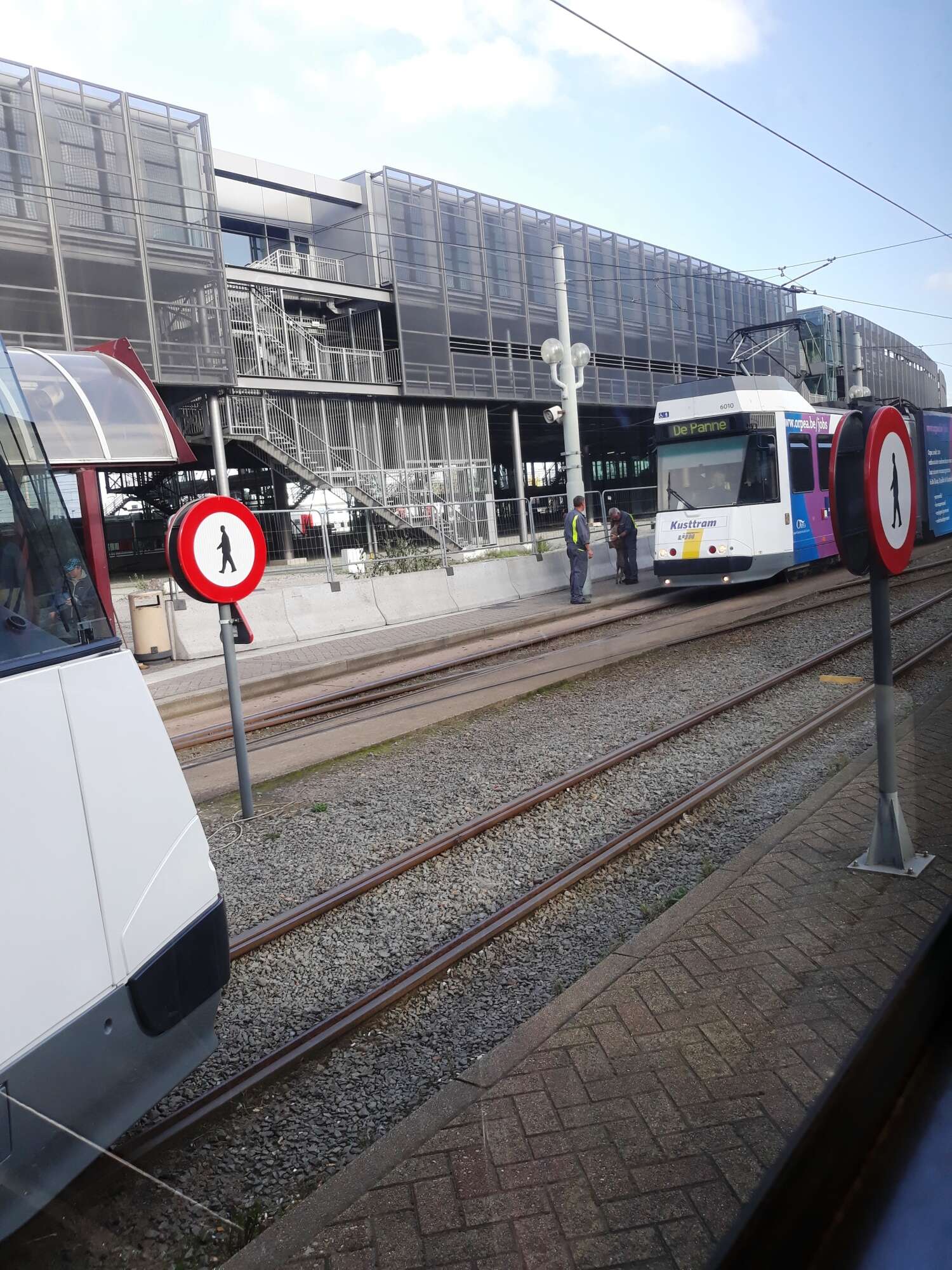 The length of the line is 68 km (42 miles). It connects the cities, towns and resorts of West Flanders. The tram runs on a schedule that depends on the season, time of day and day of the week. On average, every 10-20 minutes. It runs early in the morning and late in the evening - about once an hour. The distance between the final stops Knokke-Heist near the Netherlands and De Panne-Adinkerke, located near the border with France, Kusttram passes for 2.5 hours. 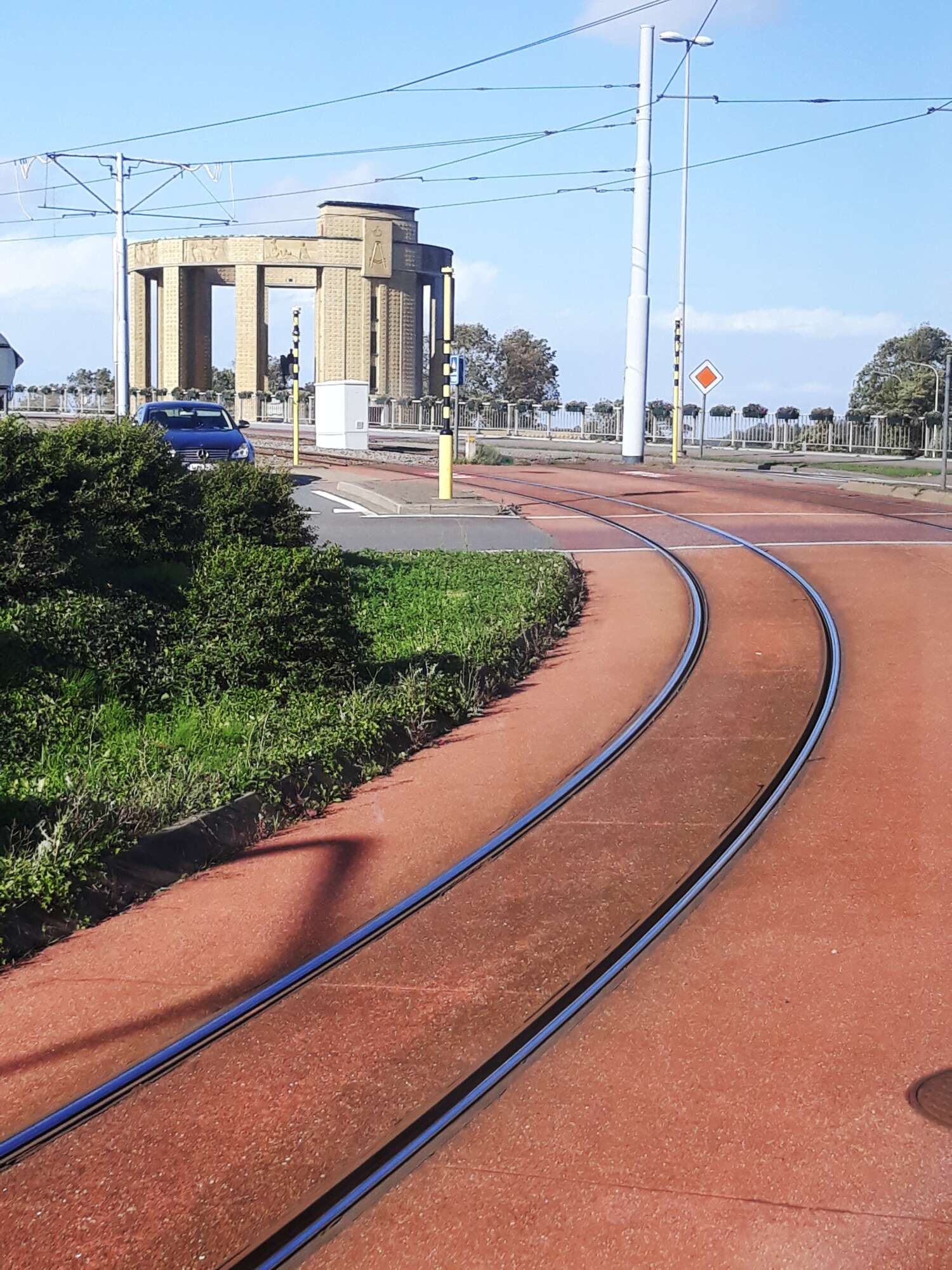 In the tram, there are three connected carriage sections with a total length of 30 m. It is designed for 279 passengers: 83 seats and a standing area for 196 passengers. It moves silently and has priority not only over cars, but also over cyclists and pedestrians. Even on the "zebra crossing". Each tram carries the emblem of De Lijn, a Flemish public transport company that services Kusttram.

How much a tram fare costs

The cost of one trip is 3 euros. The ticket is valid for an hour.

A full day ticket costs 7 euros for adults and 4 euros for children from 6 to 11 years old. You can use it until 3.59 the next morning. And go in and out as many times as you like. Ticket needs to be composted. Yellow validators are inside the tram. 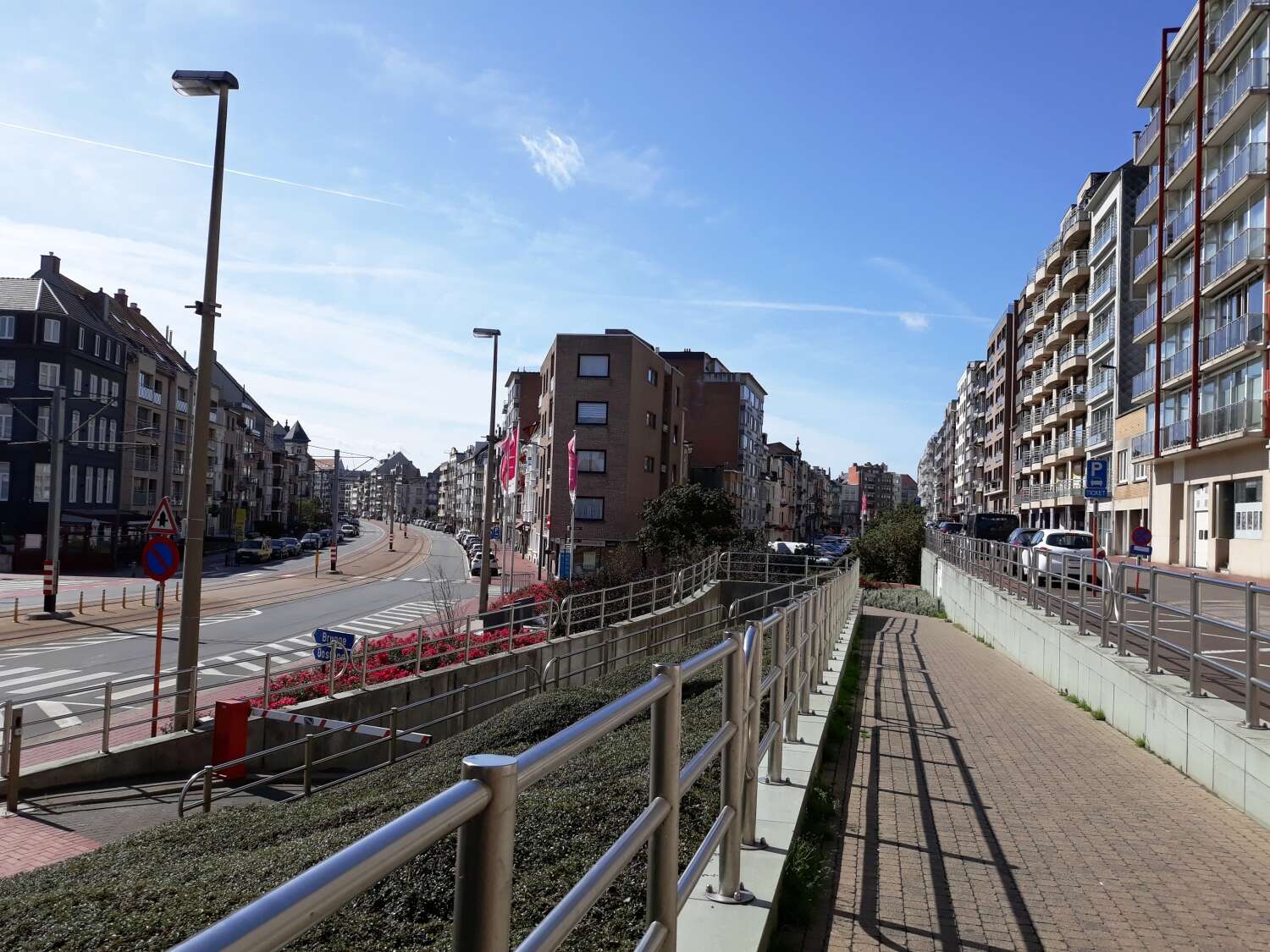 A subscription for 3 days costs 14 euros, for 5 days - 20. For 9 euros you can buy a day combined tram-bus ticket. There is also a Lijnkaart travel ticket for 10 trips during the week. It costs 16 euros.

Tickets are sold in supermarkets, newsstands, at service stations, in special machines, from the driver. The latter option will cost 50% more expensive. You also have to pay for carriage of a bike - 2 euro per trip. On the company's website you can see the schedule of trams, their location at the moment, repair sites, the location of natural parks and attractions.

Which side to sit in the tram not to miss anything

There are several travel options by tram. It all depends on your plans, mood and world perception. If you want, you can buy a ticket and go from one end to the other. And then back. True, you must be ready to travel in a crowded tram. Noisy schoolchildren returning from their activities, local old women with trolleys on wheels, passengers with dogs, mothers with carriages, tourists with bicycles. Everyone needs to go. 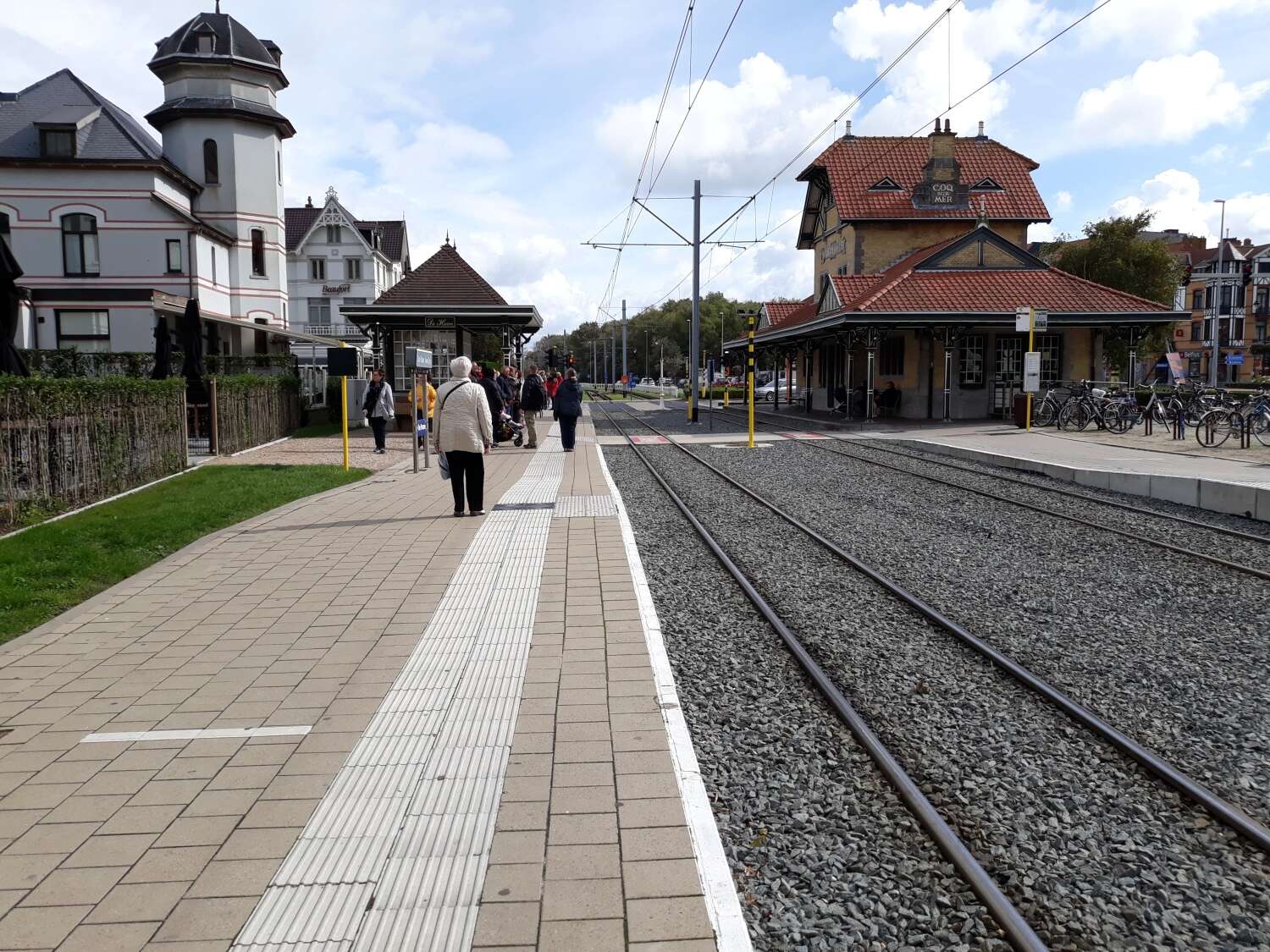 Try to settle in front. Either by the window from the right side in the direction of travel, if you are going to France, or to the left, if to the Dutch border. Because the sea will be from this side. 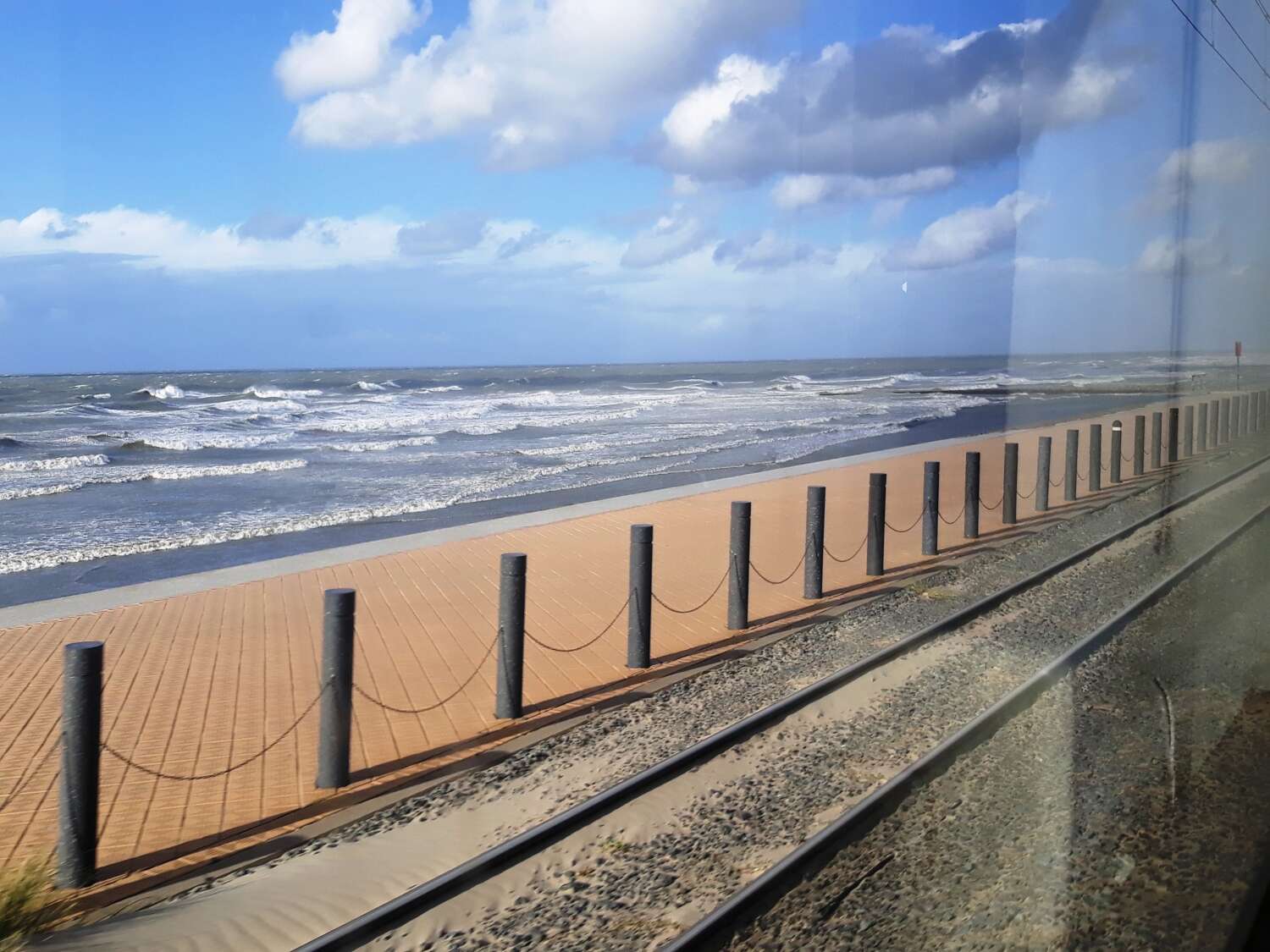 You can see one of the most beautiful sites - between Ostende and Westende - the tram runs along an endless beach. A few kilometers of unobstructed sea, sky and sand. Sitting on the opposite side in the tram, you will admire the dunes, forests and towns. Sometimes the landscape will be dull. Pay attention to the windows - some of them show advertising "Art", which can interfere your contemplation.

And what about stopping along the way?

If riding 2.5 hours one way is exhausting for you - get out where you want to. Between the end points, the tram makes 68 stops, which are announced by the driver and displayed as a creeping line on the electronic board. Inside the cabin, there is a detailed route map. In load and unload points, there are signs with the names of stops and directions. It is hard to get lost. You can act on a hunch. If you like landscape or architecture, hurry to the exit. Or you can do it consciously - having previously studied Google Street View. So, let's go?

What to see along the way of the tram

- Knokke-Heist - here is the Flemish Nature Reserve of the Zwin. Sandy beaches, polders (artificially drained low-lying parts of the coast), plains, changing in synchrony with the ebb and flow. In August-September, marine lavender blooms in the reserve. It's better to walk in waterproof shoes and windproof clothing. 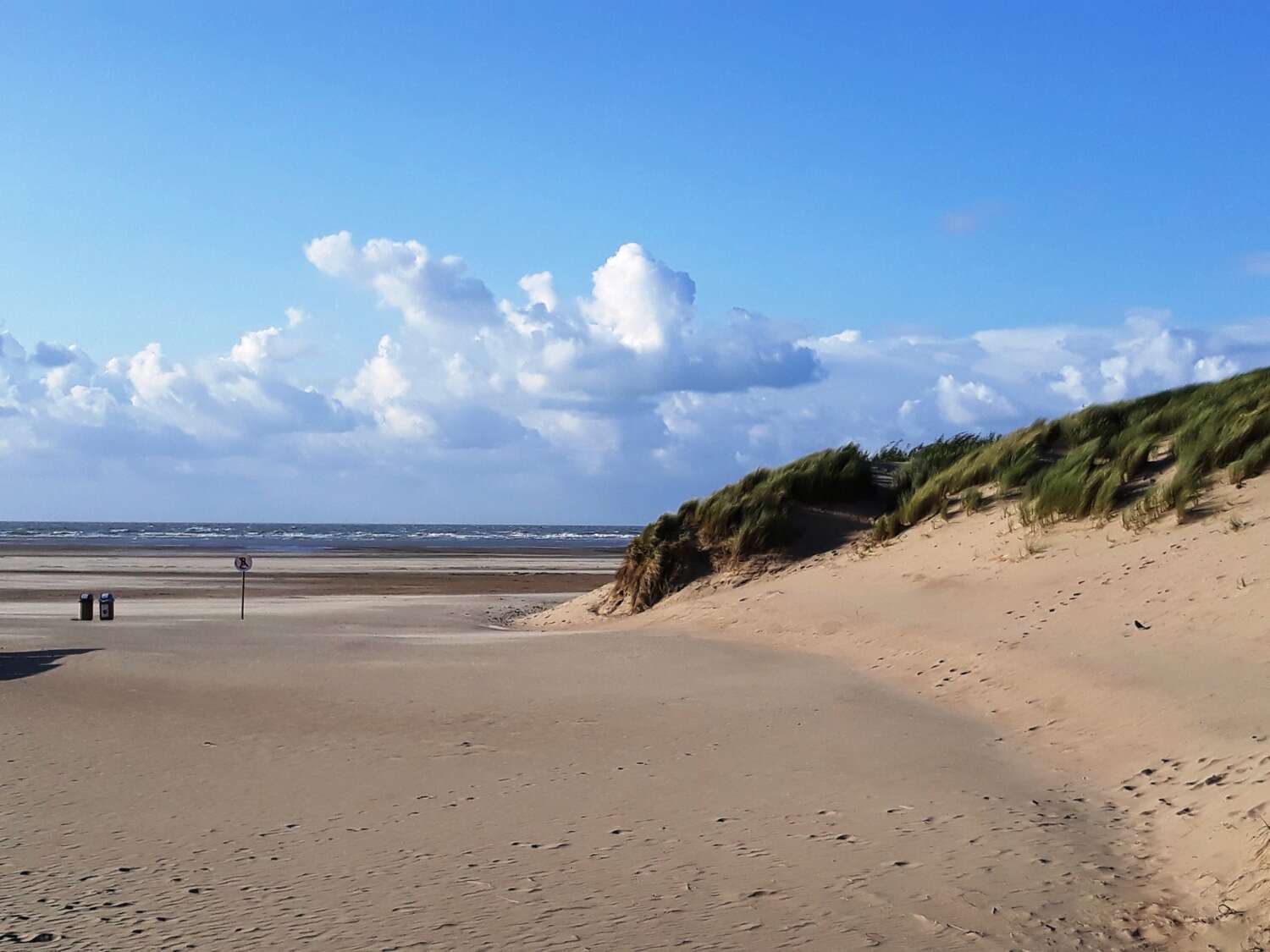 -  Zeebrugge. It's a city port. Yachts and cruise ships, container ships and tankers come here. On the territory of the old fish market, the Seafront Park is located - here is all about the sea, shipping, fish and fisheries. It is 17 kilometers to the neighboring Bruges (Brugge), where you can “lay low”, but the tram doesn't go there. You will have to travel by train or by bus. 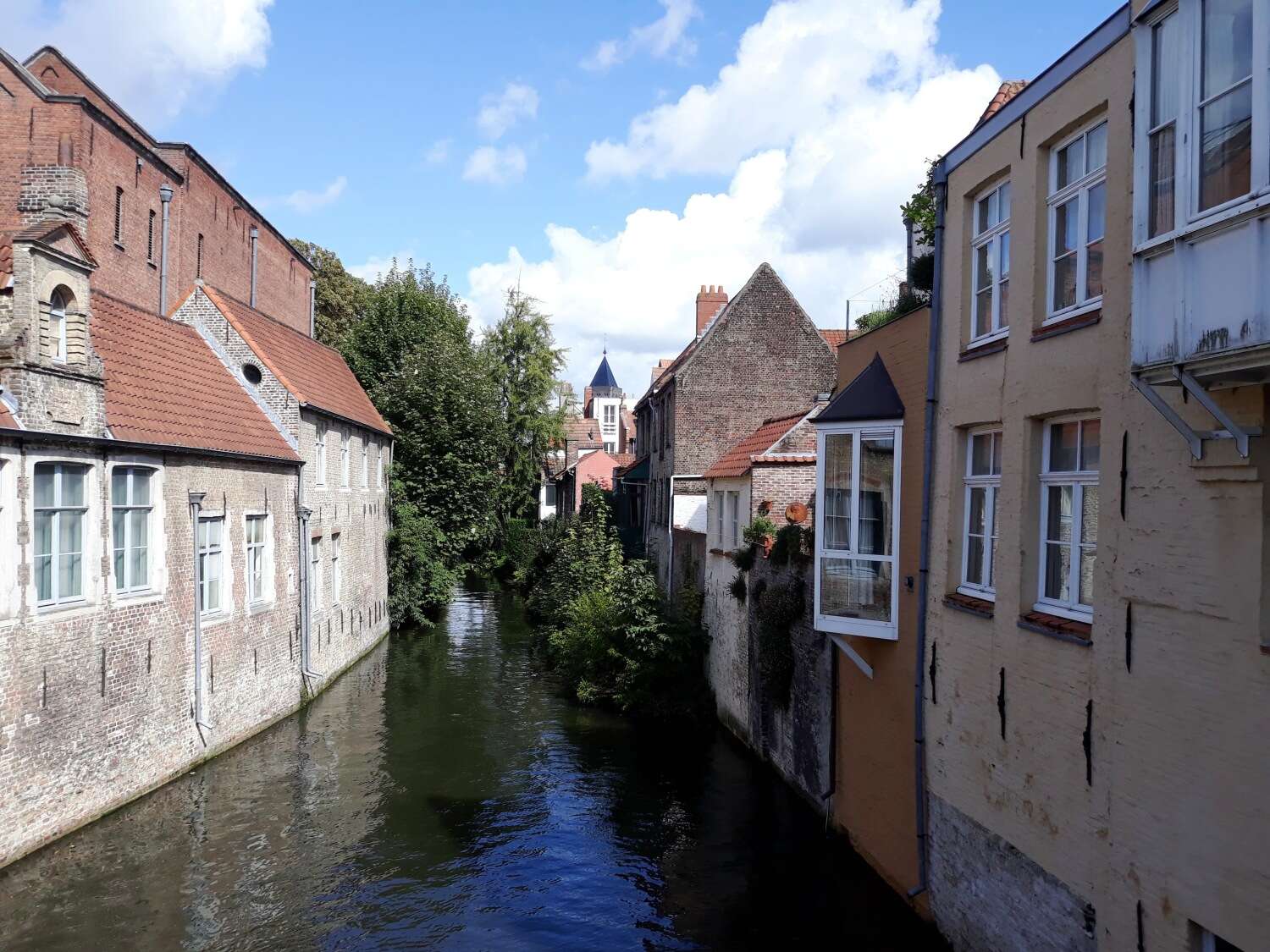 - Blankenberge is a town with long and wide sandy beaches, pier reaching far into the sea, the Royal Yacht Club, lighthouses, a sea aquarium populated by penguins, sea lions, otters, turtles, piranhas and other sea creatures. It's a city with many hotels, with high-rise buildings along the coast and miniature historic houses in the center. From Blankenberge to Zeebrugge you can walk through the nature reserve "The Fountains Nature Reserve" ("De Fonteintjes"). 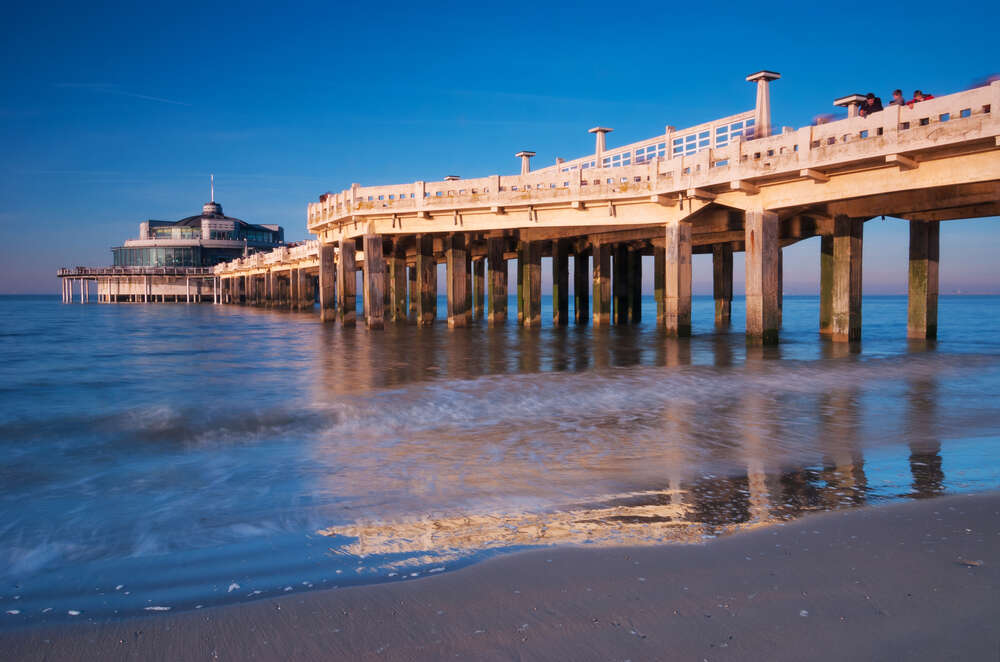 - De Haan is a charming town between the sea and the forest. There are no high-rise buildings here, but there are Belle Epoque villas. The facades of many houses are decorated with columns, turrets and attic. For a short time, Albert Einstein lived in De Haan. He is still "sitting" on a bench in front of his house. 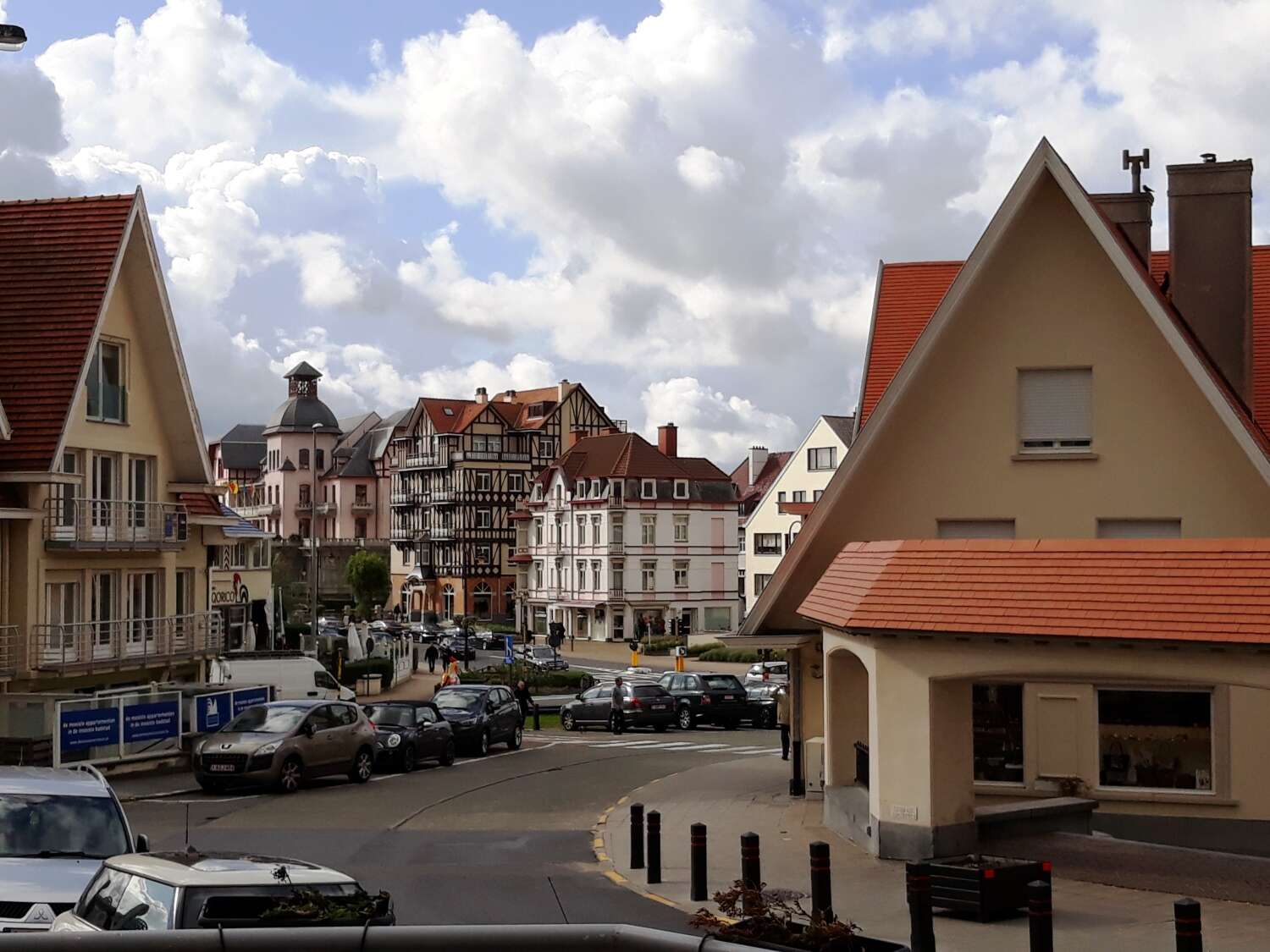 There are many roosters on city streets and parks: bright, multi-colored, of a human height and taller. De Haan is translated from Dutch as “cock”. According to the legend, a long time ago, there was no lighthouse in De Hahn, and in order not to get lost in the fog, the fishermen returned to the shore to a cock crow. 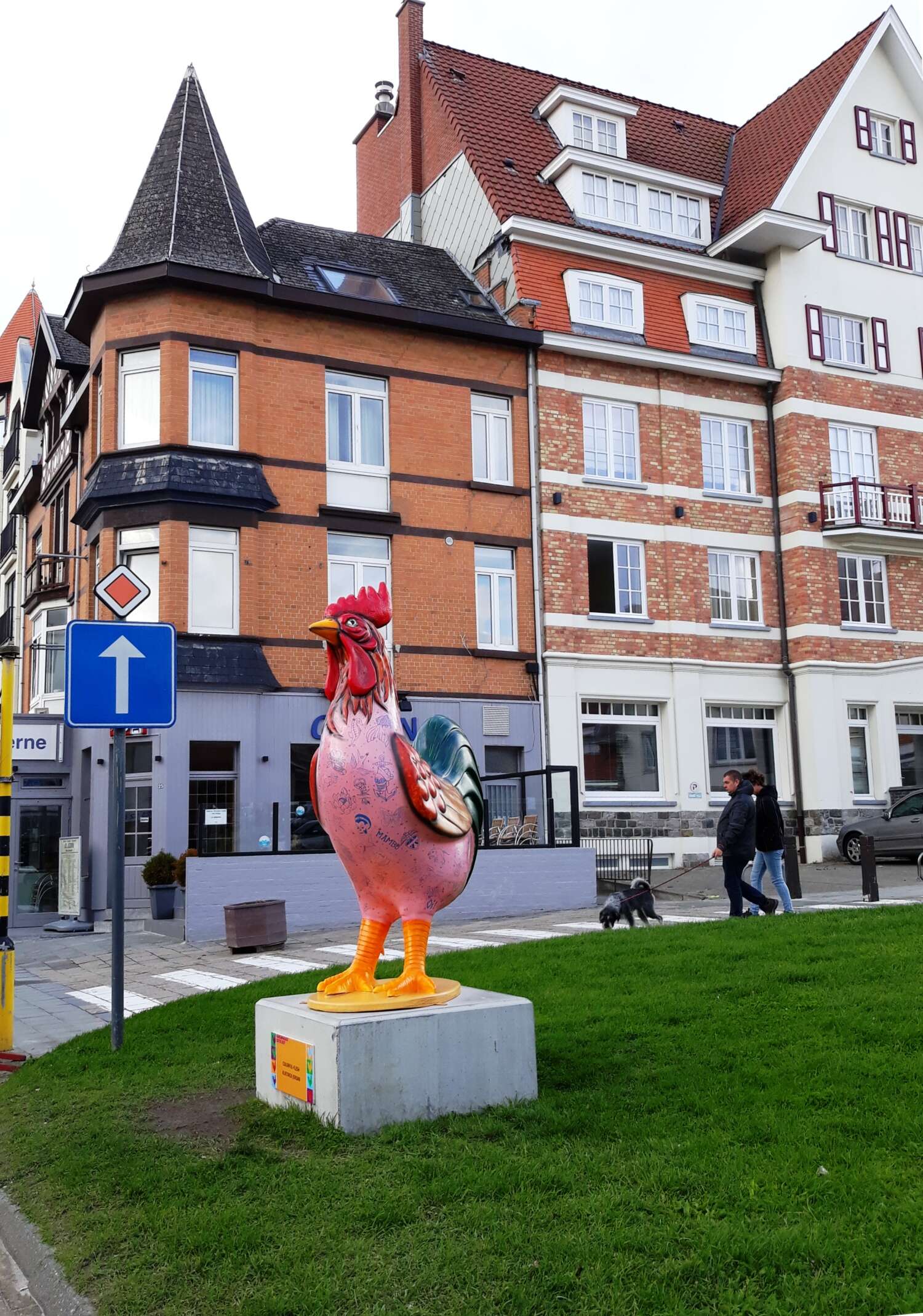 - Ostende. This is one of the oldest resorts in Europe. Wide beaches, hotels, casinos, parks, cathedrals, fortresses, monuments, museums, including one on the water. The barquentine Mercator has been serving as a floating museum for almost 60 years. You can see high masts of yachts on the background of high-rise buildings, noisy and crowded. In Ostende, sea, air and land routes from different cities and countries converge. 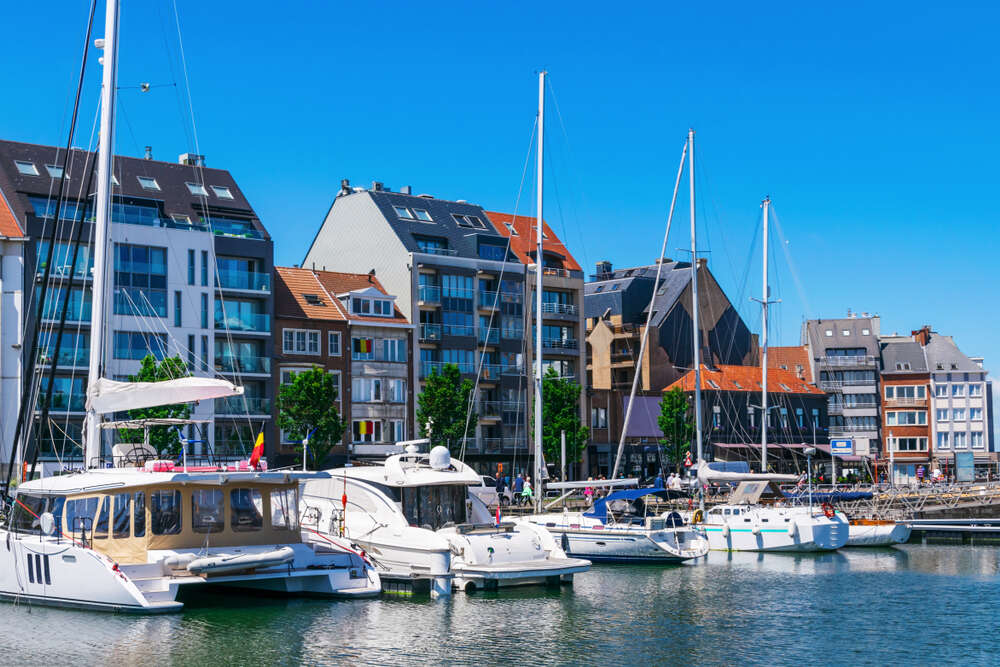 - De Panne - here is a third of all the dunes of the Belgian coast and Westhoek, the oldest reserve in Flanders. 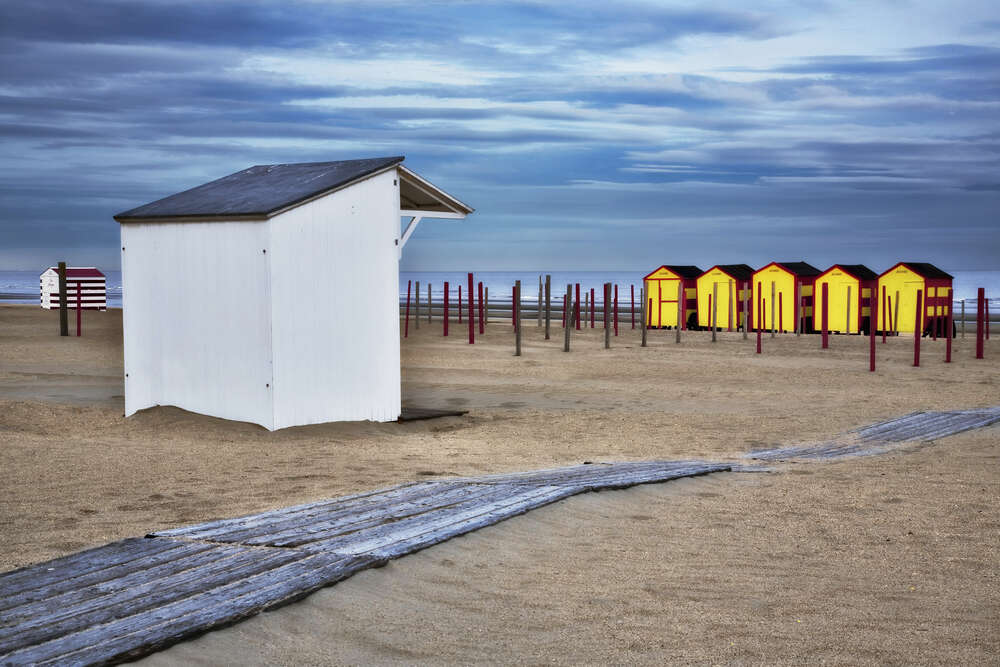 It is likely that, having traveled along the coast for almost 70 km by the Coast Tram, you will not calm down and move on. From the Knokke-Heist tram station to the town of Sluis in the Dutch province of Zeeland, you can take a 50-minute bus ride. And Amsterdam can be reached in 3.5 hours by train. From the other terminal station, De Panne-Adinkerke, you can take a bus to French Dunkirk. Since last fall, everybody can use it for free. Half an hour - and Voila! Bienvenue en France!