Peaks and depths: diving and trekking in Malaysia

Malaysia can be safely called the most urbanized one among the countries of Southeast Asia. Throughout its territory, there are multi-lane highways that connect modern cities with high-rise buildings made of glass and concrete. Surprisingly, Malaysia has many areas of virtually untouched nature. The mountainous landscape makes the country very attractive for cross-country hikers. And the fact that Malaysia is washed from almost all sides by warm seas makes it a find for a diver.

If you don't want to walk with a backpack through the jungle for a whole week, then trekking in Cameron Highlands is perfect for you. The fact is that here you can go hiking in the rainforest for half a day, and then return to a comfortable hotel or hostel room. 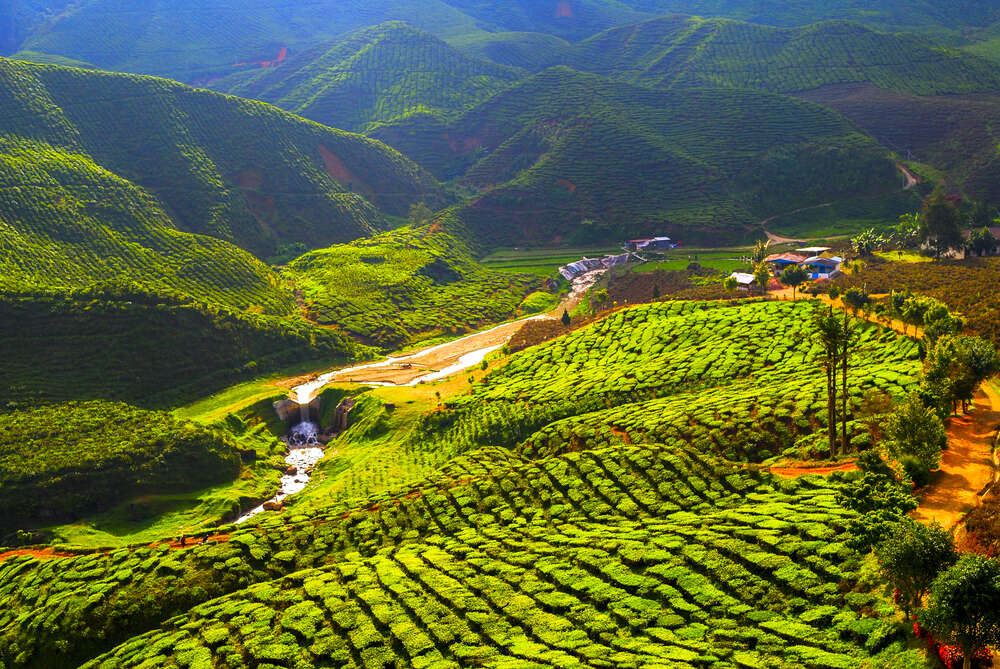 There are many small villages scattered throughout Cameron Highlands, the most popular of which is called Tanah Rata. It is near it that neat squares of tea plantations turn green, where you can walk all day, and after a walk, you can drink aromatic tea with a stunning view. 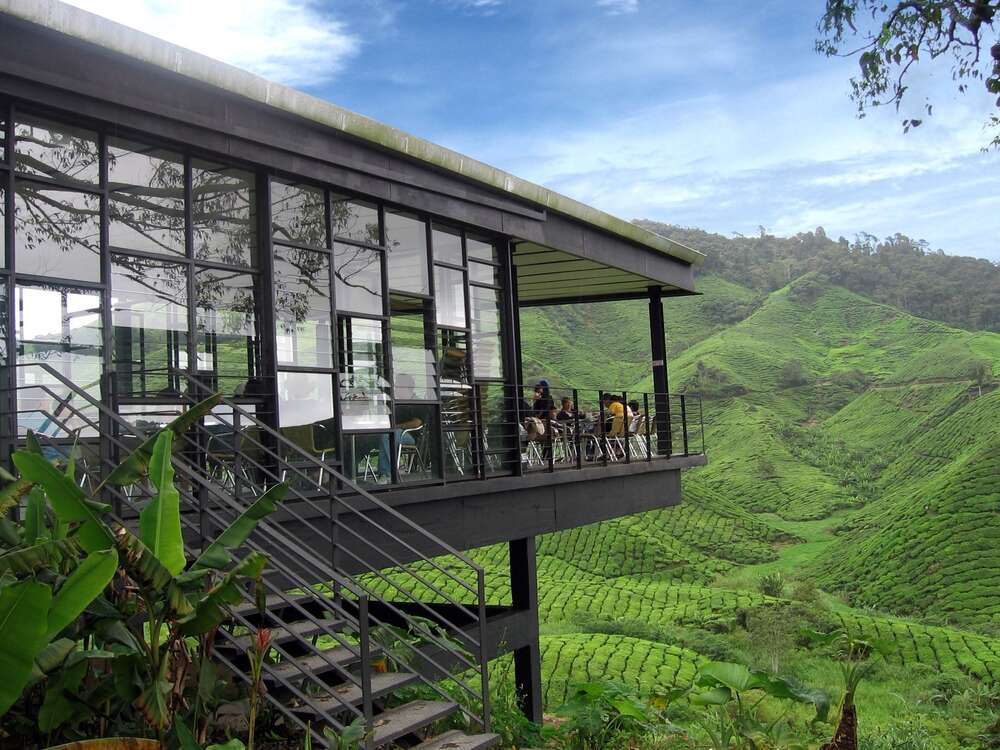 In the village itself, there are many travel agencies, rental of mopeds and tourist equipment, cafes of Malaysian, Indian and Chinese cuisine. And strawberries are also grown in Tanah Rata greenhouses. 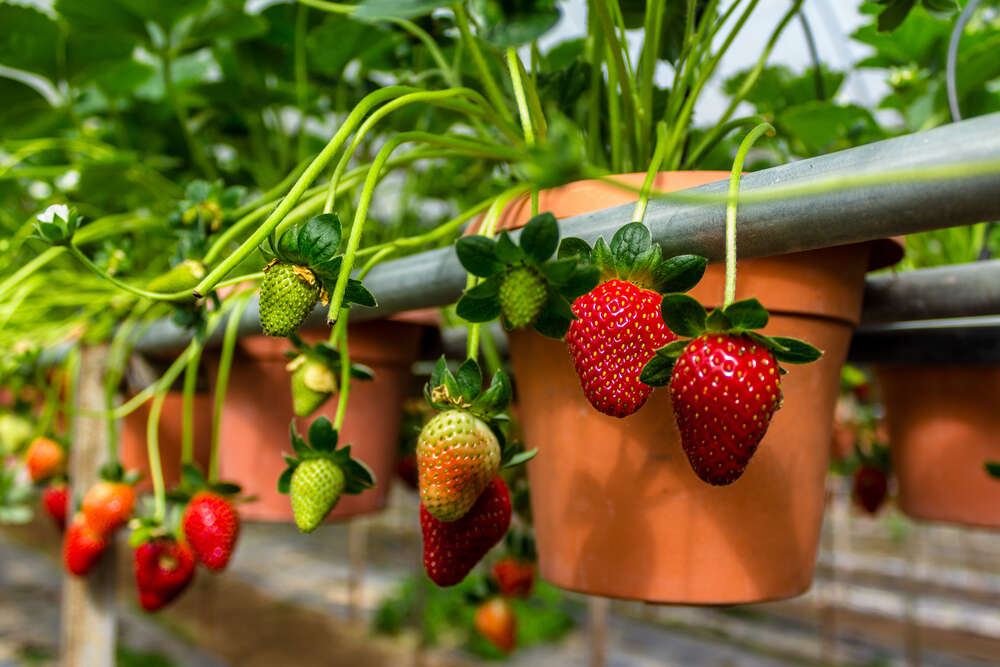 The forests of Cameron Highlands are dense jungles with numerous mountain rivers and waterfalls. You can see here unusual tropical plants, the rafflesia is the rarest of them. This huge flower with a characteristic smell of rotten meat blooms only for a couple of days a year and is so rare that you can find it only with a guide who knows all the local trails. However, even without rafflesia, the high-mountain jungle is very picturesque. 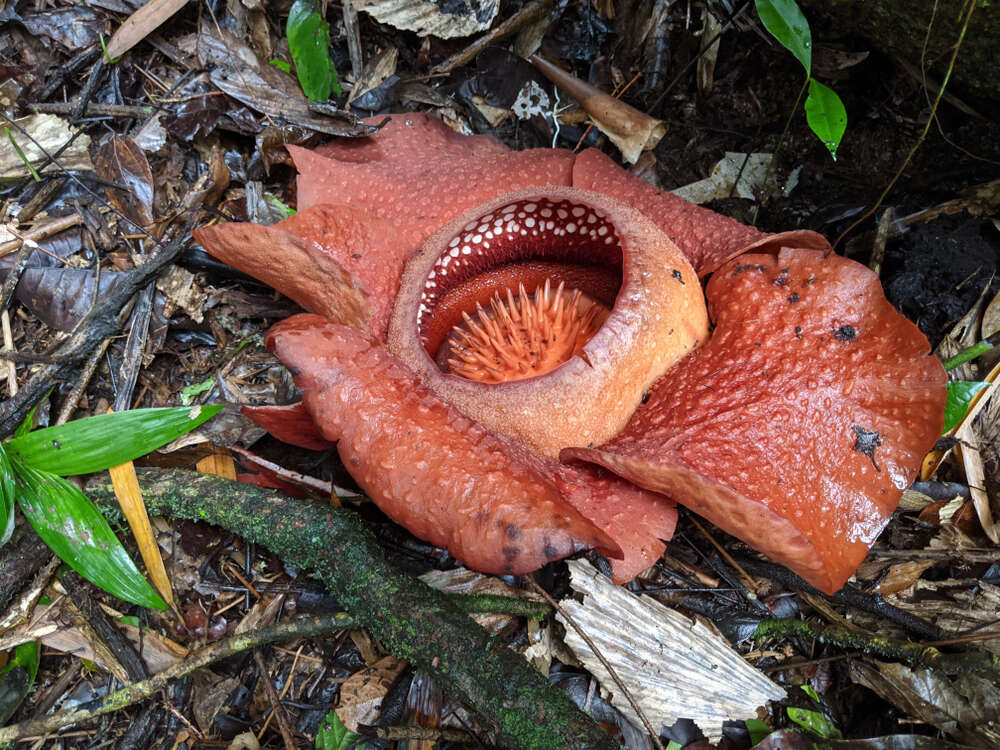 The advantages of trekking in Cameron Highlands are that you can do without a tent and other equipment and you can live in comfort. Most importantly, do not forget to take warm clothes, it is much colder in the highlands than in the lowland part of Malaysia. The disadvantage is that you cannot go far from civilization. 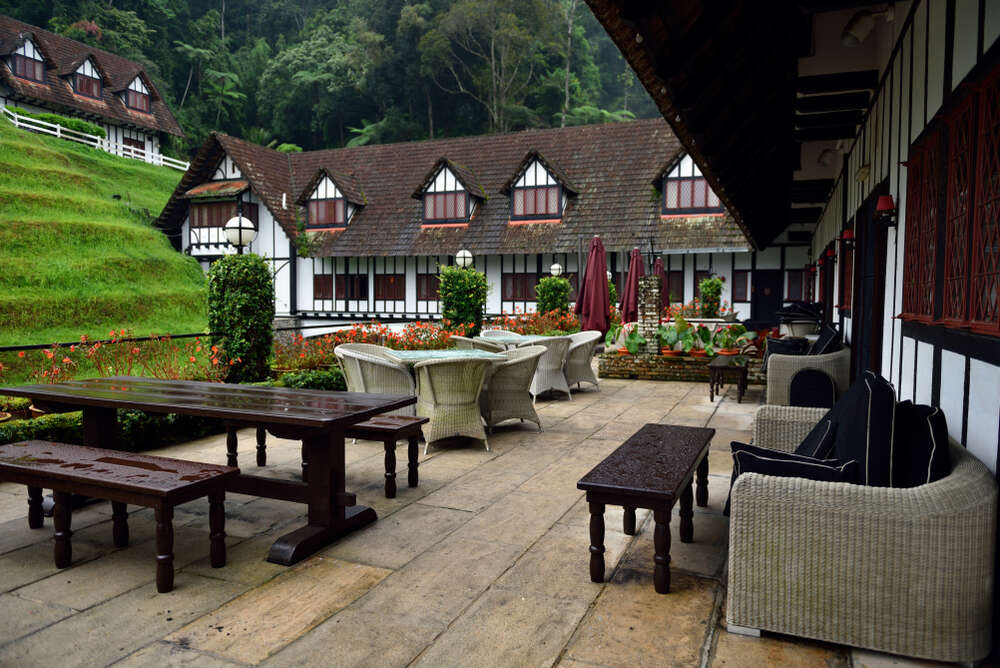 The rain forests on the territory of Taman Negara National Park have been preserved intact since prehistoric times. If you want to see the Malay Peninsula as it was 130 million years ago, then this is the right place for you. 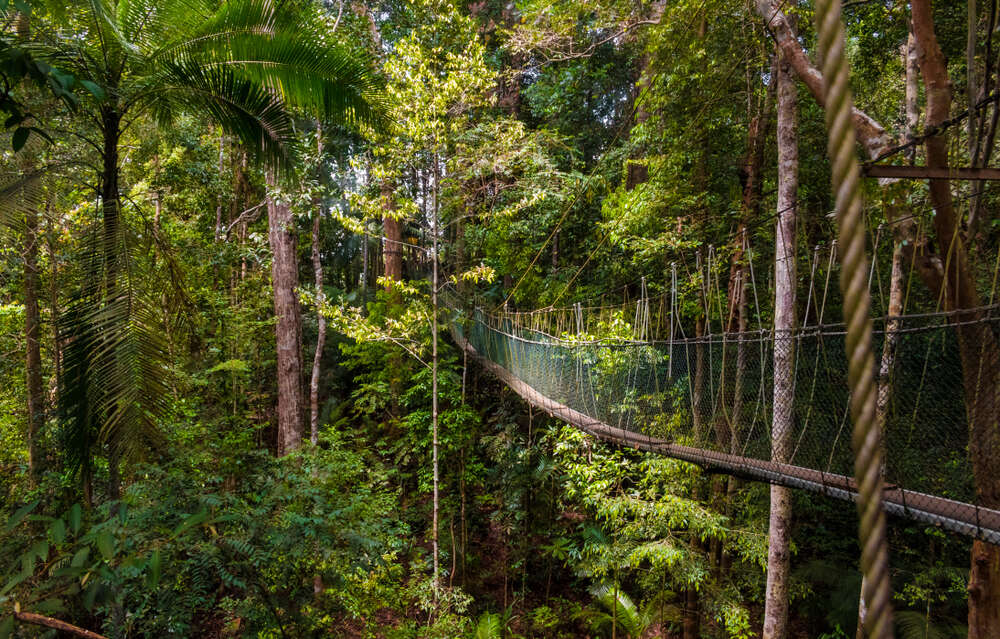 Trekking through Taman Negara is a savage hike in the classical sense. A large backpack, tent, raincoat and other equipment will have to be taken with you or rented in Kuala Lumpur, the nearest large city. You can forget about comfort, Wi-Fi and a hot shower for a few days, but the impressions received from such trekking are definitely worth all the hardships. On the territory of Taman Negara, there are not only bright birds and reptiles, but also dexterous gibbons, cute lorises, rhinos and elephants. 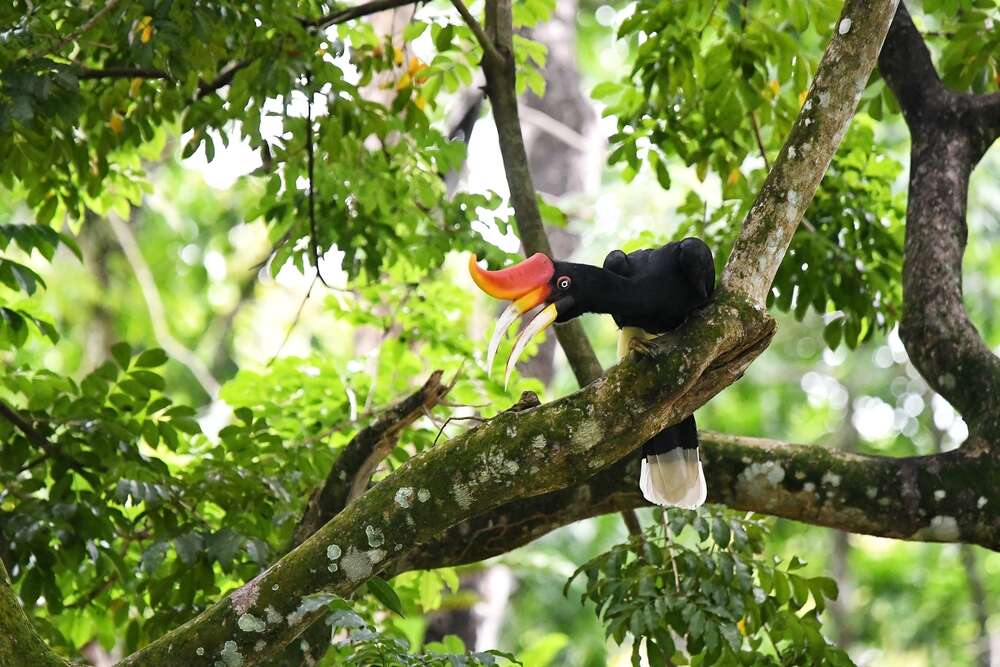 Most of the trekking trails in Taman Negara Park are in the lowlands, where it is always humid and often rainy, so waterproof shoes and a good raincoat are must-have items for the hike. The highest mountain of the national park is Gunung Tahan, the top of which offers a breathtaking view of the wild jungle. 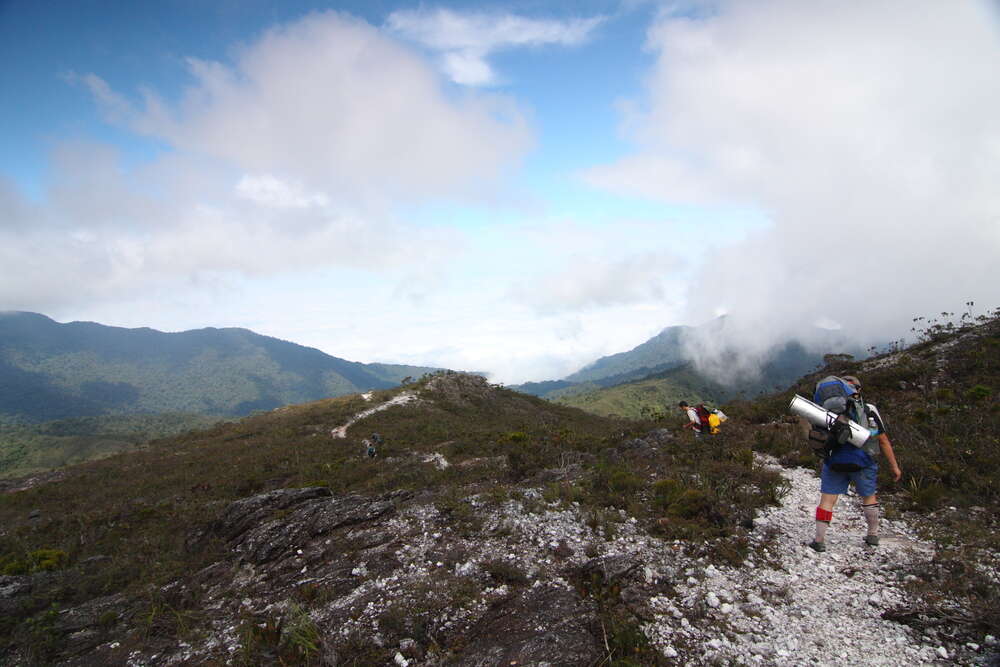 The advantages of trekking in Taman Negara are the opportunity to be alone with the pristine nature, to wander through the forests that were not touched by the woodcutter's ax. The disadvantage is the lack of the benefits of civilization.

Part of Malaysia is located on the island of Borneo or Kalimantan, which the country shares with Indonesia and Brunei. Borneo has the densest forests, the cleanest beaches, the fewest cities and freeways. That means a little comfort, but a lot of adventure. 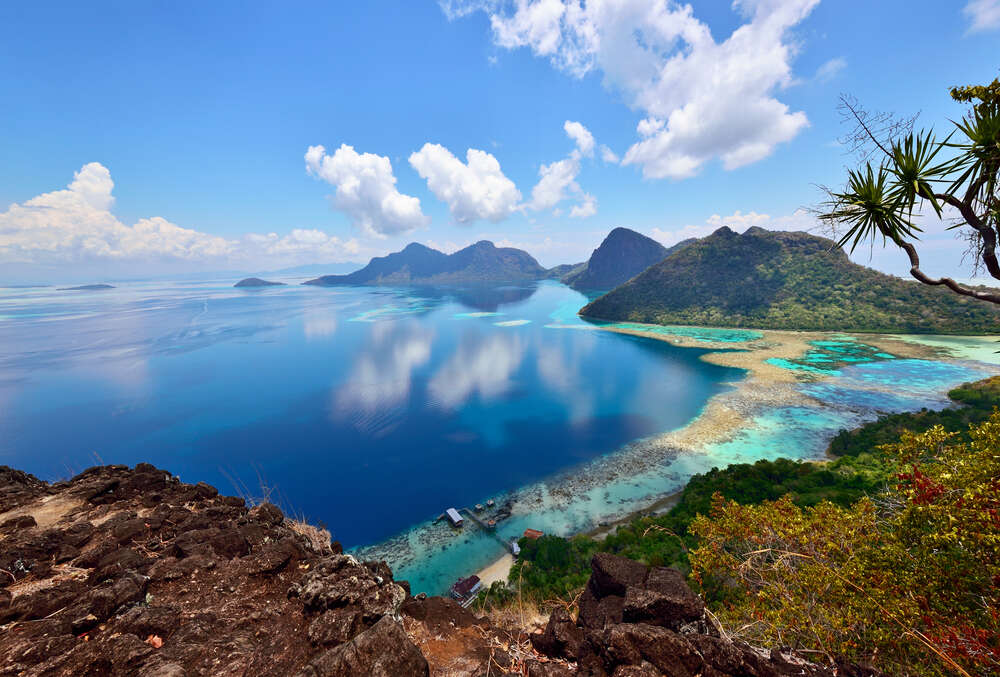 The main Malaysian national park in Borneo is Gunung Mulu, and it is through it that the most "delicious" trekking routes pass. As for conditions, this is the golden mean between the populated Cameron Highlands and the wilderness of Taman Negara. During the trekking, you can stop for the night in the loggias, you do not need to carry a tent and a bunch of supplies. 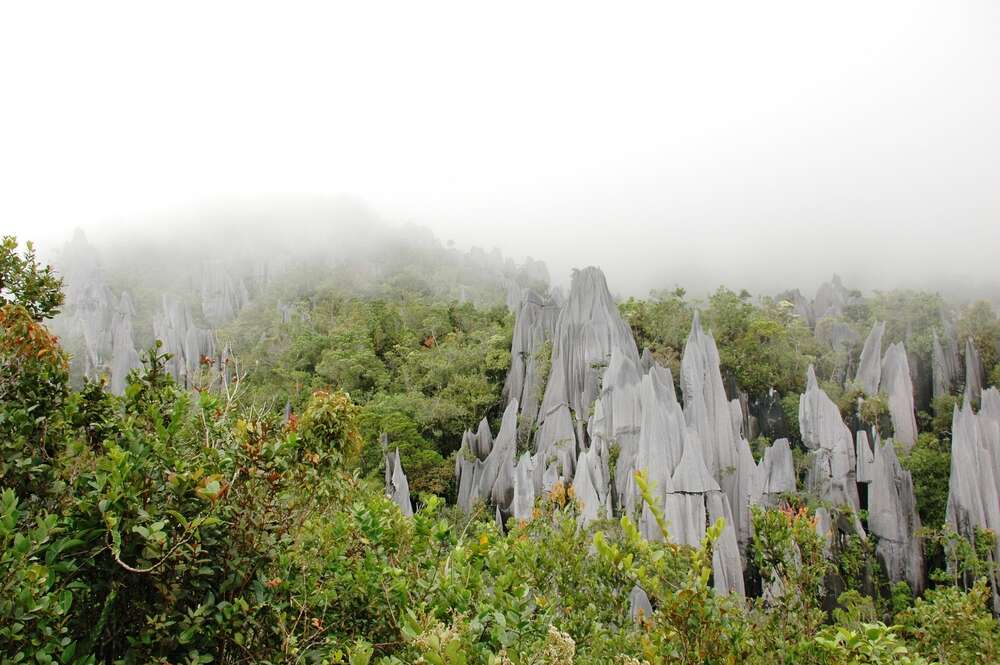 Trekking in Kalimantan means climbing Mount Kinabalu, acquaintance with one of the longest cave systems in the world, watching birds, insects, and bats. Stunning beauty of stalactites and stalagmites await you in the Cave of the Winds. The Deer Cave is considered to be the widest on the planet. Pinnacles, limestone needles several meters high, are a breathtaking sight. 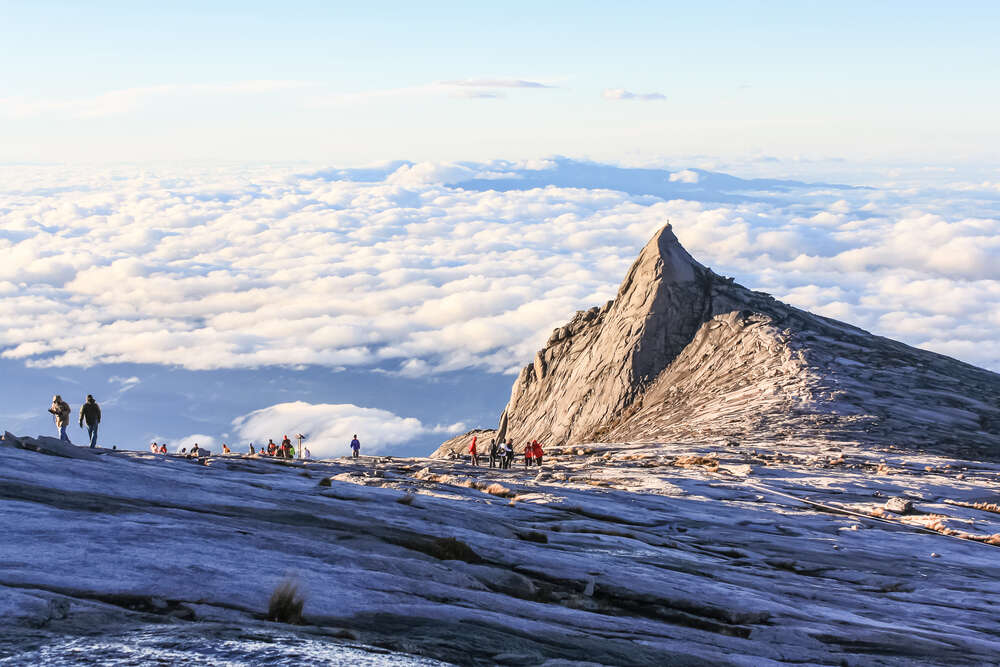 And trekking in the island part of Malaysia is good because after long and difficult hikes in the mountains, you can go down to the azure sea waters. Near Gunung Mulu, there is Tunku Abdul Rahman Marine Park, which includes five small islands with comfortable beaches. By the way, on these islands, you can not only get sunburned properly, but also watch huge monitor lizards running briskly along the coastal strip. Don't worry, these lizards do not attack people, their prey is food left by tourists and locals who had picnics. 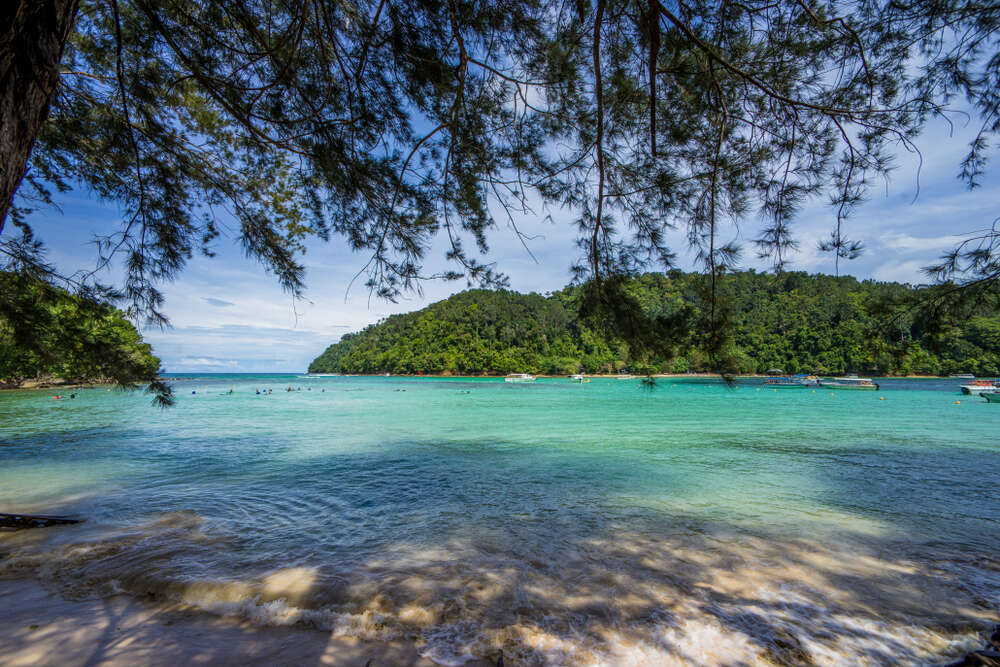 The advantages of trekking in Borneo are the ability to combine mountains, caves and seaside recreation, and not entirely wild conditions. The disadvantage is that it is located several transfers from Kuala Lumpur.

The Malaysian island of Sipadan, east of northern Kalimantan, ranks first in the ratings of the world's best diving spots. The great Jacques Yves Cousteau himself christened it "an untouched piece of art", and this speaks volumes. 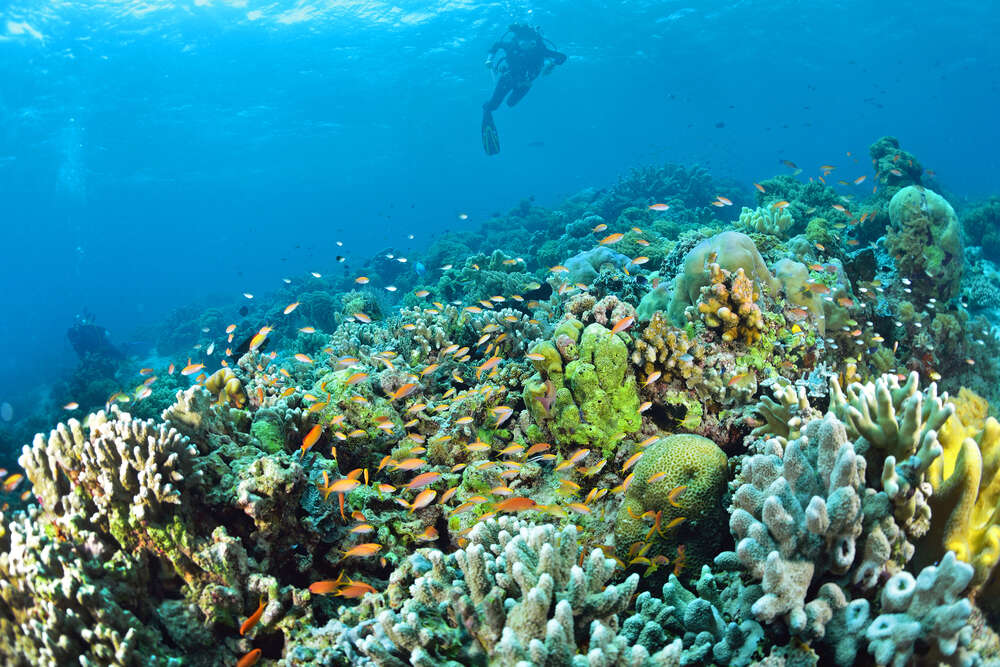 Over 3000 species of fish live in the waters around Sipadan, as well as huge turtles and several species of sharks. The island, which used to be the summit of a volcano, is densely dotted with colorful corals and has attracted divers from all over the world for many years. The maximum diving depth here is up to 40 meters, the best time to visit it is from April to December. 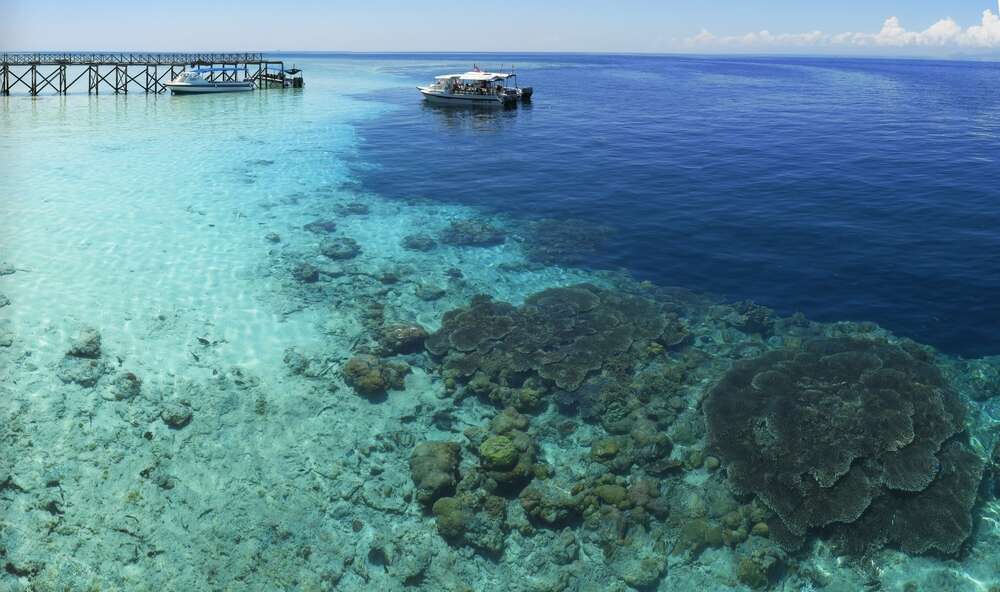 In 2004, Sipadan was declared a protected area, so it is impossible to live on the island itself, most of the tourist infrastructure and all hotels are located on Kapalai and Mabul, the neighboring islands. On their shores, you can also go scuba diving, and in between, you can relax on the beach. No diving qualifications? It doesn't matter, you can get it after training in one of the many diving centers here. 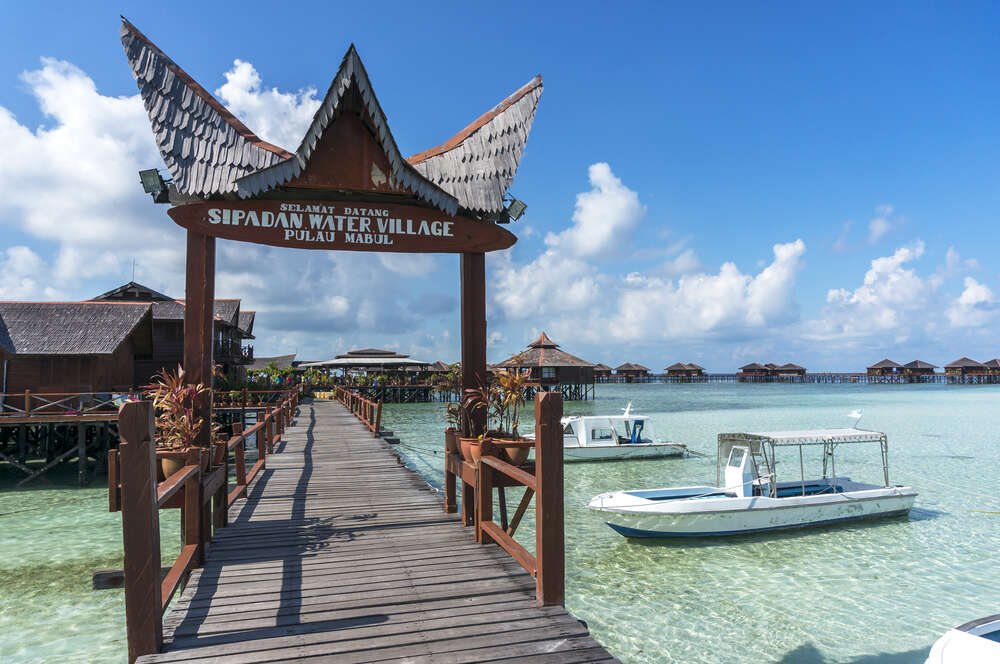 Dive with the sharks - Layang Layang

Layang Layang, like Sipadan, is located near the northern part of Kalimantan, making it possible to dive at these two points in one trip. Like Sipadan, this is another top of an extinct volcano. A feature of the local underwater world is huge schools of hammerhead sharks, constantly prowling in search of prey in local waters. 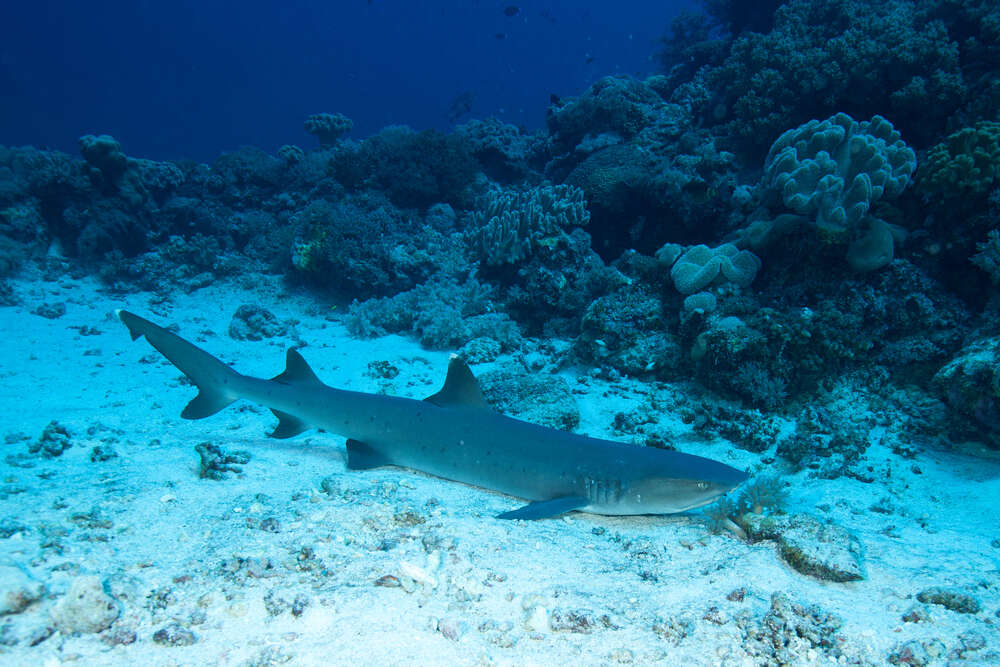 Also, the Swallow Reef, as Layang Layang is also called, will show barracudas, gray reef sharks, stingrays, giant manta rays to every curious diver. Some of the marine inhabitants are not even included in scientific catalogs yet, their diversity is so great.

Diving near Layang Layang is possible from March to August, during the rest of the months, diving becomes dangerous due to weather and currents. You will have to get to the island by plane from the city of Kota Kinabalu, there is only one hotel on the territory. It is perfect for experienced divers, but not suitable for those without a certificate.

In the last century, fierce naval battles were fought in the waters around Labuan, after which many warships and merchant ships sank. Now these ships rest peacefully at the bottom, overgrown with corals and shells and serve as a home for colorful fish. 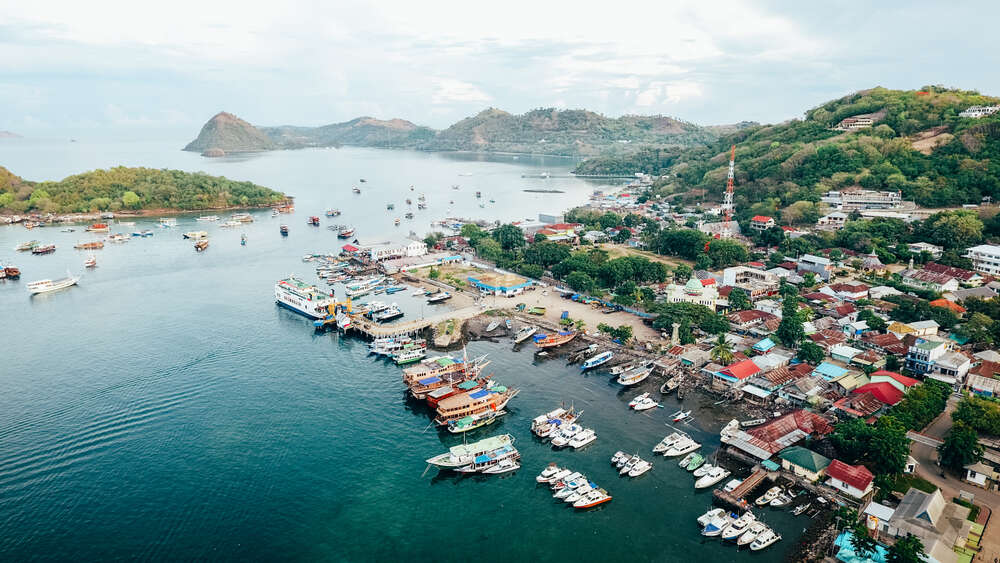 Diving off the coast of Labuan is also attractive because you can live comfortably on the island. There are hotels, beaches, golf courses and even shopping malls. By the way, the prices in the latter will pleasantly surprise you, because Labuan is an international offshore trade zone.

The diving spots described above are aimed at those who already have deep diving experience and a corresponding certificate. If you have never put on scuba gear, but always wanted to try it on, then your choice is the Langkawi archipelago. There is an excellent tourist infrastructure, a rich underwater world, and a relatively shallow depth. 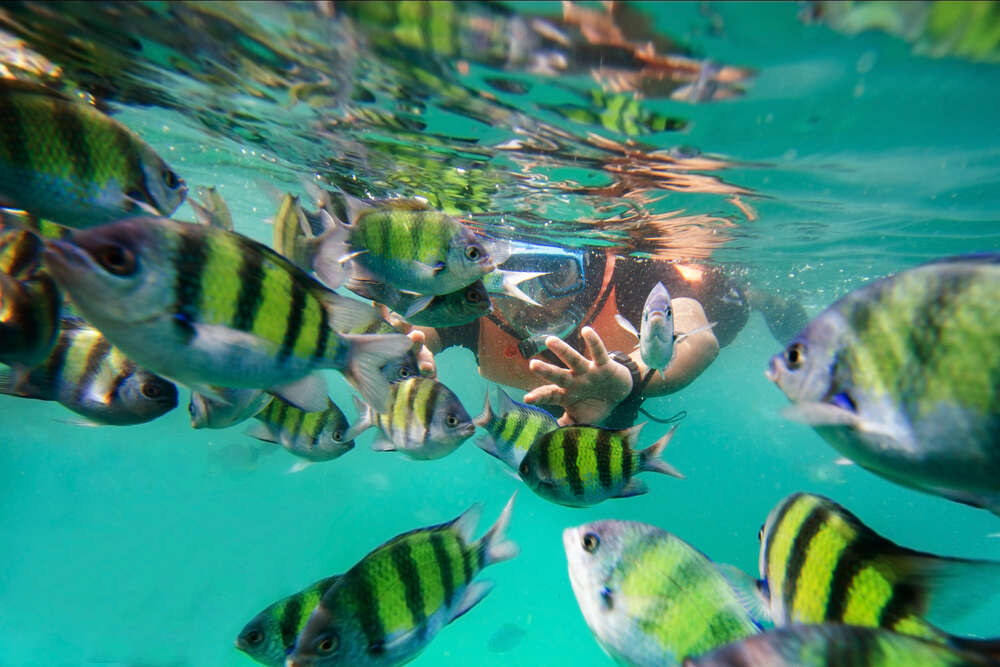 Diving in Langkawi can be combined with a beach holiday, or you can explore the caves on the islands, go snorkeling or climb the mountain. Of all the diving sites in Malaysia, Langkawi is the best option for a family vacation. 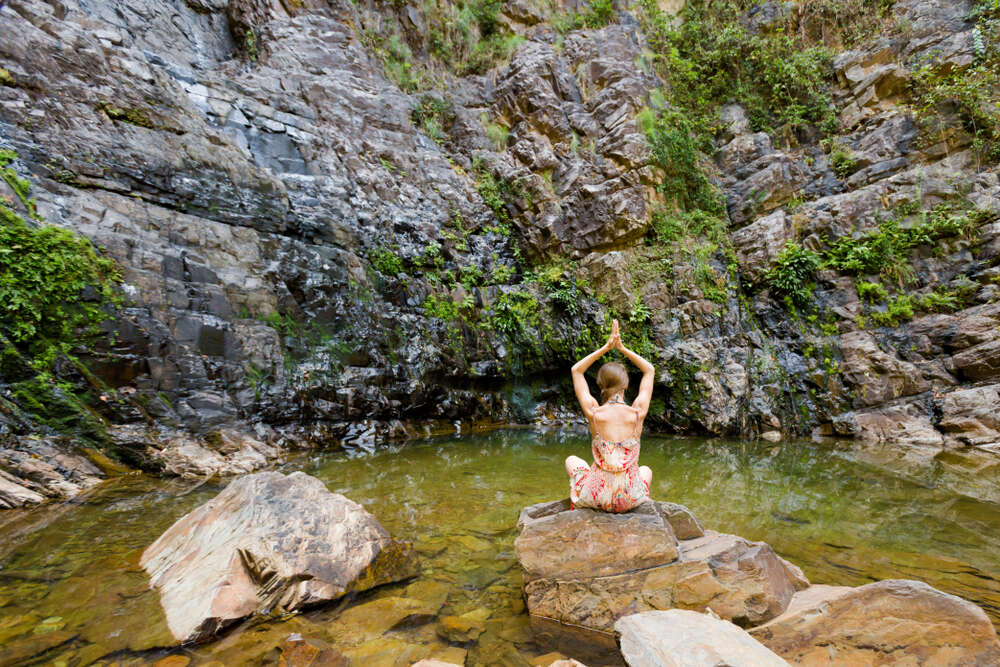 The forests and seas of Malaysia are a seething cauldron of life, a showcase of wildlife, a great opportunity to relax away from cities and roads.